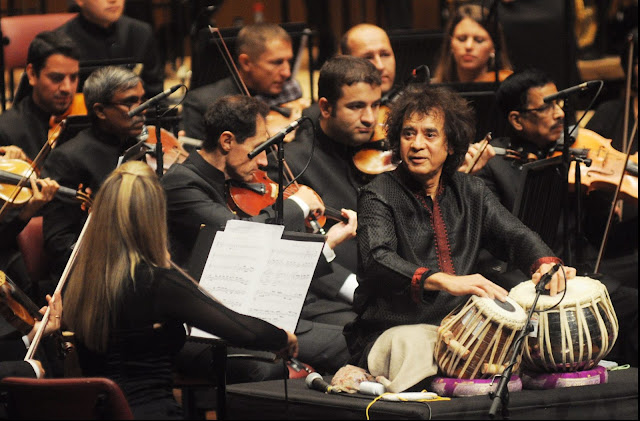 It has been a typically busy few months for Zakir Hussain. He reunited with his longtime collaborator, jazz guitarist John McLaughlin, for a revamped version of their 1970s supergroup, Shakti. He curated and performed at a musical tribute to his father, Alla Rakha. There was an exhibition on him in Mumbai, with photographs by Dayanita Singh. And now Hussain is performing a concerto for four soloists which he has composed—Ameen, Amen, Shanti, which tells the story of three priests, Hindu, Muslim and Catholic, finding common ground—with the Symphony Orchestra of India (SoI).

The concerto for tabla and three vocalists will have its India premiere on 25 February, at the National Centre for the Performing Arts (NCPA), Mumbai. This is where I met Hussain, immersed in making a symphony orchestra, a tabla, Sufi vocals and church music sound like one coherent piece. I started by mentioning that I had been listening to his 2009 album, The Melody Of Rhythm, on the way there, which turned out to be a useful segue into the idea of composing for orchestra. Edited excerpts from an interview:

Was ‘The Melody Of Rhythm’ your introduction to writing music for an orchestra?
I am glad you heard that album. It’s an interesting one because that group— (banjoist) Béla Fleck, (bassist) Edgar Meyer and I—was the first interaction that I had with SoI. I was here for the inauguration of the NCPA, more than 50 years ago. Working with the symphony orchestra has been a great source of inspiration.

We were commissioned by the Nashville Symphony to compose a piece for their new concert hall. When it was performed, it was a big success and there was interest for us to record it. When SoI heard it, they realized this is an Indian musician involved in composing a piece that they could actually play. They could have an Indian perform and it might be of interest to audiences here. So they asked me if we could do it and they brought it here and it worked out beautifully.

After that they commissioned me to write a piece called Peshkar. Since it was premiered here, that piece has been performed in Switzerland, England, Italy, America, Canada. It’s great that SoI commissioned a piece that I wrote that’s now becoming a performance piece for so many orchestras all over the world.

Is this new concerto also commissioned by SoI?
No, it’s not. This piece is commissioned by the National Symphony Orchestra of the United States, which is housed in the Kennedy Center in Washington, DC. I was thinking about a piece that would be focused on how the world is at the moment, and the way I think it should be. What’s great about this is the involvement of Shankar Mahadevan and Hariharan and this fabulous opera singer called Kelley O’Connor. We were initially supposed to do it for one day but we ended up performing three nights in the Kennedy Center to full houses. Now, we have got to do it here and the singers are coming back.

Was the idea always to have vocals?
Yes, it always was in my head. Growing up in India, between 3-8 in the morning, I would spend two-and-a-half to 3 hours with my father learning Shiv stuti, Ganesh vandana, Saraswati vandana and how to recreate that on the tabla. After breakfast I would go to the madrasa and study the Quran, learning to recite it by memory. Then I would cross the street to St Michael’s high school, attend mass there and go to class. So in a few hours all these different ways of life came my way, and I interacted without being stressed that they were all different.

With a concerto like this, with several different instrumental and vocal styles, how do you start?
Different combinations of musicians requires a different way of looking at things. When we got together for The Melody Of Rhythm, Edgar said, how about giving us some melodies? I did; they worked on it for a couple of hours. This one line of melody became an orchestral piece.

With Peshkar, it was the tabla repertoire which was the source, visualizing in my mind how I would perform the material I learnt from my father. I laid all the tabla compositions down and then visualized how the violas would play this part and so on, and then assigned all the sections transposing the tabla bols with the melodic notes. Basically it was a rhythm piece: even the orchestra is playing tabla.

Ameen, Amen, Shanti was kind of a statement, so it had to be words. They were laid down first, and just humming the words in my head, the melodies started to appear. I am also going to write a fourth concerto, commissioned by SoI, a triple concerto again, for tabla, sitar and flute.

Did you stick to a particular raga while working on the initial melody?
When you are writing for a symphony orchestra, you have to keep in mind that their sensibilities revolve around harmonics. So you have to write harmonies, counterpoints, canons. So when you do that, it is difficult to adhere to just one raga. The harmony wants you to use four notes in one layer—not always will you arrive at a situation that only the notes allotted by the raga will make the harmony.

That’s why the tabla concerto was a fun thing to do, because it wasn’t revolving around a raga, it was revolving around a rhythm cycle. And rhythm is universal. Of course, having been brought up as an Indian some raga structures did creep in. But I did not tie myself down to their do’s and don’ts.

Ravi Shankarji, when he wrote his first sitar concerto, decided to put it into a particular raga. Later on, I was having a discussion with him and he felt a little restricted because he could not mess with the raga structures. So he ended up writing a piece that was more like the symphony orchestra playing the raga, but very little harmonic element involved. He corrected that by doing another concerto where he was able to open it up a bit more.

This is quite a time to be performing a piece about oneness...
Really? (laughs) I don’t believe religion belongs in politics, especially in a democracy. What I call Hindustaniyat—that’s what we need to focus on.

I think people just need to remember that this (oneness) was always the theme. When we embarked on our journey as a free nation, it was with that in our minds. So I am not saying anything new. It’s just for us to be able to notice it again, with a little more depth in our vision.

This piece appeared in Mint Lounge.
Posted by a fan apart at 1:30 AM