As shocking as the day it first released, Tony Kaye’s American History X is a high-water mark in the director-as-sadist tradition. The movie pounds the sensibilities of the viewer like a piñata. Everyone is either yelling or cussing (usually both), and since this is a film about race relations, it’s interspersed with a slew of racial epithets. Get used to that and there’s the violence (filmed in slow motion so you don’t miss the finer details). Get used to that and there’s the yawning gap where something profound ought to be. You’d expect a film this inflammatory to at least have a stand about race relations in America beyond “violence begets violence”, but hey, why bother when it’s all so pretty to look at.

Derek Vinyard (Edward Norton) is a skinhead messiah, someone younger zealots can look up to. He’s all the more dangerous because he has a way with rhetoric – something that white supremacist leader Cameron Alexander (Stacy Keach) recognises and uses to his advantage. It all comes undone when three African-American hoods try to jack Derek’s car. He does what any reasonable neo-Nazi might: he shoots one of them in the back and kills another with a brutal “curb stomp”. He goes to jail, and, for reasons that are never made entirely clear, has a change of heart there. Cured of his racist tendencies, he returns to find his younger brother Danny (Edward Furlong) following in his goosesteps.

American History X has a large number of fans who laud its unvarnished take on what might well be a reality in some American neighbourhoods. Yet, there are questions that one needs to ask a film of this nature. One of the most disturbing about American History X is not so much its unbridled bile but its bias in granting the proponents of hate so much screen-time, while shutting out the voices of reason. There are exactly two of the latter – a school teacher (Elliot Gould), who is shown to be limp and pathetic, and Derek’s prison mate, who’s a comedian. Pitch that against the terrible magnetism of Edward Norton and you have an unfair battle.

In Spike Lee’s Do the Right Thing, an equally controversial but far superior film on race relations, a character called Radio Raheem describes the battle between his two fists: one with “love” tattooed on it, the other “hate”. In his version “Left-Hand Hate [is] KOed by Love”, and though Lee’s film ends with an uneasy truce, at least it gives love a chance. Tony Kaye’s film doesn’t, preferring to believe instead in the circular nature of hatred. The cult of American History X is uncomfortably similar to the one shown in the film: loyal followers seduced by noise and violence, unwilling to ask the questions that matter. You can believe every claim made for Norton’s performance though – there’s no taking your eyes off him. Norton also had a hand in rewriting the film, along with Kaye, and was present during the editing process (unlike the director, whose erratic behaviour earned him a studio ban). Kaye later disowned the film and tried (unsuccessfully) to remove his name from the credits. It would have been fascinating to have him or Norton explaining exactly how their versions differed, but we have to settle for a few deleted scenes and a trailer.

This piece was published in Time Out Delhi.

The Taking of Pelham One Two Three 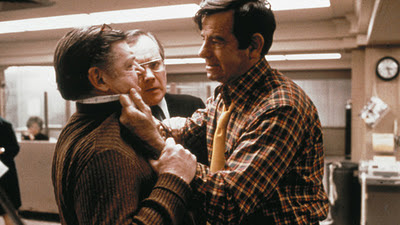 Thrillers are best served funny. Howard Hawks knew that. So did Hitchcock. And, in 1974 at least, so did Joseph Sargent. The Taking of Pelham One Two Three mixes rough comedy with edge-of-the-seat tension, the same cocktail which Jaws used to break the bank nine months later. The film a hijack drama set in the New York City subway system, and is executed so flawlessly it’s a wonder Tony Scott thought he could improve on it (for the record, he missed by miles).

Four criminals, headed by Robert Shaw, take control of subway train Pelham One Two Three. They read out a list of demands, primary among which is the ransom payment of a million dollars for the 17 hostages aboard. On the other end of the line, in charge of negotiations, is transit officer Lt Gerber (Walter Matthau). Matthau, in a rare non-comedic role, is perfect as the quick-on-his-feet Gerber. The movie doesn’t make him out to be a great human being, but he’s the right man for the job – level-headed, pragmatic, committed. Matthau’s schlumpy heroism is complemented by Shaw’s precise hijacker and Martin Balsam as his sneezing cohort. There’s also an entertaining supporting cast of growlers, scowlers and wisecrackers.

In the years since its release, the film has spawned a 1998 TV remake, as well as Scott’s version with Denzel Washington and John Travolta last year. It had a vital role in pioneering the cult of the stripped-down action movie (Tarantino was a fan, and filched the idea of criminals identifying themselves as colours for Reservoir Dogs), though its clear how big-ticket movies like Speed have borrowed from it as well. A large part of the success can be attributed to cinematographer Owen Roizman’s work; the grungy look is like New York City sans makeup. The Taking of Pelham One Two Three is the kind of action movie they don’t make enough of now days – plain-spoken, funny, and conveying a real sense of the place and time it is set in. Compared to the CGI-heavy behemoths clogging theatres now days, this film feels like a wiry prizefighter punching above its weight.
Posted by a fan apart at 12:53 AM No comments: