It's been a bad day, please don't take a picture

My favourite rock band, R.E.M, just called it a day. This was conveyed via one typically non-dramatic message on R.E.M.HQ yesterday:
"To our Fans and Friends: As R.E.M., and as lifelong friends and co-conspirators, we have decided to call it a day as a band. We walk away with a great sense of gratitude, of finality, and of astonishment at all we have accomplished. To anyone who ever felt touched by our music, our deepest thanks for listening." R.E.M.

On a shortlist of Sachin retiring, or the remaining Beatles or Bob Dylan popping off, this is about the worst news that I can imagine. I'm still in shock, so I'll take a day or two to collect my thoughts and hopefully return with something coherent about what this band has meant to me and why I'll always be a fan.

"It Happened Today", from their latest, and now final album: a song whose words now read like a gentle warning.

This week in totally unnecessary censorship...

Last night, Easy A was playing on Sony Pix. Reasonable people might describe this movie as sharp-tongued; only a puritan would call it profane. It began at 11.15 at night, not an hour at which innocent young ears need to be protected. Nevertheless, Easy A was subjected to a barrage of bleeps (blanks, actually – they’ve stopped using bleeps) that might have been appropriate if the movie in question was Reservoir Dogs. Anyone else getting the creeps over the gratuitous use of silencer on TV screens in this country?

On the evidence of last night, words we’re being protected from:

I can’t decide which of the last two is more shocking. 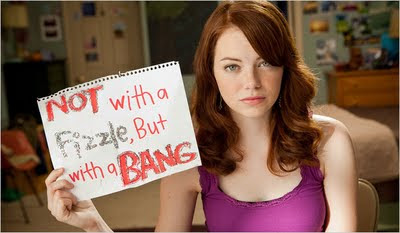 Agora’s plot may suggest swords and sandals, but it’s really about astronomy and 4th century religious politics. But before you go “Yawn” and head off to check the timings for Spartacus: Blood and Sand, let us also add that Agora, far from being a dud, is a decent stab at the legend of Hypatia, the Egyptian philosopher and proto-feminist. Though hampered by Hollywood’s penchant for putting plummy British accents in togas, the film raises several complex issues without sacrificing the considerable human drama – including the infamous sacking of the Library at Alexandria – of the time.

Hypatia (Rachel Weisz) is a scholar whose disinterest in marriage is matched by her love for the sciences. She tries to transfer this enthusiasm to her students, who are increasingly distracted by the events unfolding outside the library compound. For the first time in ancient Egypt, Christianity is on the rise, and the Pagan ruling class is feeling the heat. Director Alejandro Amenabar moves quickly into scenes of uprising, ransacking and pillage. Some Christian commentators protested when the movie came out, but the Pagans are shown to be equally merciless early on; the real target seems to be organised religion’s brutality and contempt for science. Amidst all this, Hypatia remains immersed in her work, even as her enemies plot her death.

Agora isn’t as satisfying as Amenabar’s previous films, which include The Sea Inside and Abre Los Ojos, but it does boast a number of strong performances. Weisz confirms her status as one of the most underrated actresses around. Also impressive are Oscar Isaac and Max Minghella (Divya Narendra in The Social Network) as her former student and slave respectively. There’s also particularly good use made of the overhead shot in the mob scenes, a twin reference to Hypatia’s study of celestial bodies and the tragedy of not being able to see the larger picture.