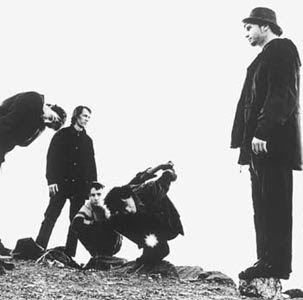 Mother: Son, have I got a little story for you. What you thought was your daddy was nothing but a…While you were sitting, home alone at age thirteen, your real daddy was dying. Sorry you couldn’t see him. But I’m glad we talked”
Son: I’m still alive

Mother: Is there something wrong?
Son: Well, of course there is
Mother: You’re still alive
Son: Oh, and do I deserve to be? Is that the question? And if so, who answers?

Is there something wrong? Well, of course there is. These lyrics are bad. As are most of the lyrics on Ten. There are no two ways around it. Look at the lines above. They sound like something out of the Young and the Restless. To this day I cannot understand what Eddie means when he asks “Is that the question?” What is even more strange is that the song, and the album as a whole, really work. Pearl Jam as musicians and Eddie as a vocalist take lyrics which are almost banal and turn them into something close to sublime through the sheer intensity and range of their performance. It doesn’t matter if “The boy was something that mummy wouldn’t wear” makes you wince, because Vedder’s just shouted “Dadeee didn’t giive a-feckshaan nooo” and man, you know he means it.

What perplexes me is how they went from the vague semi-suicidal rants of Ten to the varied lyrical triumphs on Vs. Contrast the closed-circuit depression of Ten’s songs with the equally morbid but elegant ‘Indifference’. 'Rear View Mirror' provides an outlet to the rage coursing through it, aptly framed by the final triumphant guitar break. And ‘Elderly woman behind a counter in a small town' is a first-person monologue about old age and its memories of youth, an unusual choice of subject matter for what was ostensibly a ferocious grunge band. It brought to light two important things – one, the band had a sense of humour (the inordinate length of the title was a charmingly adolescent riposte to those who had accused the band of having too many one-word song titles), and two, Vedder was capable of putting aside his petulant growling and pen down lyrics of unexpected maturity. The song, told from the point of view of an old woman, unfolds in a simple Dylan-like manner, Vedder’s voice accompanied by acoustic strumming and little else.

‘I seem to recognize your face
Haunting, familiar, yet I can't seem to place it
Cannot find the candle of thought to light your name
Lifetimes are catching up with me’
All these changes taking place,
I wish I'd seen the place
But no one's ever taken me
Hearts and thoughts they fade, fade away...

I swear I recognize your breath
Memories like fingerprints are slowly raising
me, you wouldn't recall, for I'm not my former
It's hard when, you're stuck upon the shelf
I changed by not changing at all, small town predicts my fate
Perhaps that's what no one wants to see
I just want to scream...hello...
My God it’s been so long, never dreamed you'd return
But now here you are, and here I am
Hearts and thoughts they fade...away...
Hearts and thoughts they fade, fade away...’

Who is this being addressed to? A kid who left town years ago? An old friend or lover? Does the person recognize her? Does she say these words aloud at all? Probably not. Introspection of the sort which produces lines like ‘Small town predicts my fate’ is in in some ways more impressive than the dark brooding that ‘Black’ or ‘Why go home’ must have been a product of. It takes an uncommon sensitivity to treat, with more care than you’d take for your own, the fears and insecurities of someone so far removed from yourself .
For the first time, the song carries Vedder’s voice, instead of Vedder’s voice driving the song. He begins in hushed tones, but as the narrator's memory is jogged, his voice gains in strength. The tone goes from intimate (‘I swear I recognize your breath’) through to moments of insecurity and regret (‘You wouldn’t recall’, 'I changed by not changing at all’) and finally, and most touchingly, happiness bursts through and the voice rises exultantly to exclaim, as old friends do, “My God, it’s been so long…”
Posted by a fan apart at 9:19 PM 1 comment: 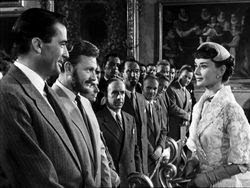 The last scene of Roman Holiday is like a Beatles single, in that it's so compact, and so perfect in its construction, that you instinctively feel it cannot be improved, irrespective of what you think its artistic merits are. The director William Wyler sets the audience up beautifully with an hour and a half of charming, scenic fluff; diverting, sure, but not such stuff as dreams are made on. Then when everyone expects him to end the fairy tale the way all fairy tales ended in the 1950s, he calmly pulls the rug out from under their feet. It’s a strangely unsettling ending – no tears are shed, and there is no need. No matter how much one may deny it later, almost all who watch it for the first time are left with a feeling of gnawing emptiness, as if the happiness denied to the characters on screen was in reality their right, and was being denied to them.

Clichéd may a slightly tough word to use the first one and a half hours of this movie; it has winsome performances, beautiful Rome in the background and the sort of leisurely charm which Hollywood couldn’t come up with the today if you gave them a multi-million dollar budget and a special effects system which thinks for itself. But clichéd it is – Audrey Hepburn plays a slightly spoiled, very bored princess who runs away from her drudge of a royal life, and Gregory Peck a journalist who sees in her the story of a lifetime. Like any good Italian romance, they walk around, see the the Trevi Fountain and the Colosseum (and, in a marvelous improvised scene, the Mouth of Truth), have close brushes with the local police, and finally, fall in love. However, the clock will soon strike twelve, and Cinderella must return to her gilded rags and troop inspections. So they part, if only to clear the way for the final, towering cliché – the journalist is sent off to the climatic press junket to win her back.

So the great Gregory Peck stands and looks at his love for a sign, but things are not going according to script. We have seen a little while earlier that the princess is no longer controlled by her advisors, and she reacts sharply when one of them reminds her of her duty towards her station. It gives us a hint that she has already thought the matter through, and made her decision.

The deliberate manner in which Audrey Hepburn says her lines here could be (and has been, by some critics) put down to nervousness, a debutante handling her first big scene. As for me, I think of Anna Karina in Godard’s Bande a Part looking straight at the camera and saying “My heart goes out at the sight of you”. Then I think of Audrey Hepburn interrupting her own manufactured response to slowly intone “Rome. By all means Rome” and I can’t choose one classic movie moment over the other.

Finally, after all the questions have been asked, the princess comes down to meet the members of the press, including Gregory Peck, who probably expects her to say a lot, and is disappointed. By now, the look of confidence he started the scene with is visibly beginning to wane; like the audience, he is slowly, painfully coming to terms with the fact that this may not be a happy ending. Yet he looks up, and with a movement so subtle as to be non-existent asks her “Well, how about it?” She replies with the slightest shake of the head. In an unforgiving close-up, we see hope fade from his face, and he swallows. The audience though, has not learnt its lesson, and still expects a fairy tale end. They force him to linger until everyone else has left, hoping that she will reappear, recant. But she doesn’t. It truly is the end, and all one can do is accompany the man on his lonely walk out.
Posted by a fan apart at 3:09 AM 8 comments: