Jaane Bhi Do Yaaro on page

When Jai Arjun Singh was approached by Harper Collins, his first thought was to do a book on the Kamal Hassan-starrer Pushpak. However, it took one mention of Kundan Shah’s 1983 comedy by commissioning editor Saugata Mukherjee to change his mind. “I realised this would be a compelling film to write about,” Singh said in an interview. “With Jaane Bhi Do Yaaro, you just know there’d be an interesting behind-the-scenes story. Coincidentally, I’d just seen the film for the first time as an adult a few weeks back, after a gap of 17-18 years.”

While Singh does drop a warning coda early on in the book (“It is difficult to describe this film to someone who hasn’t experienced it first-hand”) chances are most of his readers would be familiar with this, Hindi cinema’s ultimate cult film. Nearly two decades after its release, fans still quote its absurdist lines, discuss the philosophical implications of Satish Shah’s highly entertaining corpse, and write mini-theses on the Marxist (Groucho Marxist) Mahabhratha sequence. Even dedicated viewers of the film, though, should find plenty that’s new in this breezy (yet thorough) piecing together of how the film fell into place. Singh speaks to most of the major players – among others, director Kundan Shah, screenwriter Ranjit Kapoor, actors Naseeruddin Shah, Ravi Baswani and Om Puri – and uses their first-hand reports to illuminate why the movie played out the way it did.

While Singh had written about this film on his blog Jabberwock, he decided to approach his first full-length by not “pre-deciding how the book was going to be. I decided I’d keep my mind open and if something interesting came up during the research process, I’d go with it,” he said. He stressed how different the film might have turned out if the script hadn’t been through multiple iterations, and the crew hadn’t been receptive to new ideas while shooting. Shah’s original English script had a talking gorilla and Anupam Kher playing an inept hitman called “Disco Killer”. These ideas were shot and subsequently dropped, as were many others, notes Singh in a fascinating chapter entitled “Outtakes from the Shadow Films”. This was as much due to the vision of the filmmakers and the legendary scissor-fingers of editor Renu Saluja (her contribution, along with Shah and Kapoor, is singled out by the author as most vital to the film) as it was to NFDC tax regulations, which stipulated that movies shorter than 2 hours 25 minutes fell under a different slab (Yaaro clocks in at 2 hours, 24 minutes).

The more one reads Singh’s book, the more one is struck by the fact that Jaane Bhi Do Yaaro may not only be one of India’s best-loved comedies, but also the encapsulation of the possibilities of a moment when a supremely talented bunch of individuals decided to collaborate on a project that seemed jinxed from day one. Its cast and crew reads like a non-mainstream honour roll – besides those mentioned above, Pankaj Kapoor, Satish Kaushik, Sudhir Mishra and Vidhu Vinod Chopra were all involved with the production – and Singh cites not only FTII, where the director and most of the actors studied, but also NSD, of which Ranjit Kapoor and Robin Das, the art director, were alumni, as important founding grounds for the film.

What makes Jaane Bhi Do Yaaro all the more unique is the fact that it has proved surprisingly resistant to imitation. When asked why, Singh mused “I don’t know if it’s too mystical to suggest that when Shah and Kapoor came together, it was a once-in-a-lifetime thing. Maybe other directors didn’t have the same sensibility. Or maybe some did, but didn’t have a crew that was on the same wavelength.” In such a situation, what might Yaaro’s legacy be? The book points in some surprising directions. Sudhir Mishra, for instance, remarks how the harrowing scene where two cops beat up Shiney Ahuja’s character in Hazaaron Khwaishein Aisi had, to his mind, an undercurrent of black humour that was a result of his having worked on Shah’s film. Singh also mentioned Pankaj Advani’s Sankat City and Peepli Live as films possessing the same absurdist comic outlook. Ultimately, though, the best analogy for Jaane Bhi Do Yaaro’s ethereal lightness, and well as its elusiveness, can be found in Akhtar Mirza’s advice to Shah: “Your script is like snow, so it’s floating. If you put all this logic into it, it will become ice and sink.”

Two thumbs up for emotional writing. Two down for Wikipedia's reputation as a unbiased source. These are the site's concluding words on the Jessica Lal murder case:
"Senior advocate Ram Jethmalani...alleged that the High Court Bench had made up its mind to hold Sharma guilty. Solicitor General Gopal Subramanium submitted that there was sufficient evidence against Manu Sharma for his involvement in the crime. Yay."
Posted by a fan apart at 3:47 AM No comments: 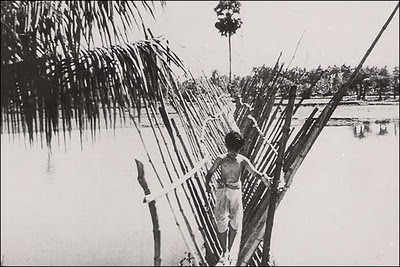 This review was published in Time Out Delhi.
Posted by a fan apart at 10:35 PM 2 comments:

Movie buffs ceaselessly cast and recast the movies they see. Salon's outrageous piece inspired me to do some replacing of my own.

1. Farley Granger in Strangers on a Train
Granger wrecks every Hitchcock film he's in (he's awful in Rope as well), and in this one, Robert Walker's silky pyschopath runs rings around his quavering, ineffectual tennis player wimp. Hitchcock might have been served better by going with the other actor rumoured to have been considered for Granger's part - William Holden. The handsome soullessness he displayed in Sunset Boulevard would have been just the right quality for this role, something to make the audience doubt whether he actually wanted his ex-wife dead or not.

2. John Mills in Great Expectations
Simply too old to be a twentysomething Pip. It fairly ruined the film for me, despite all that lovely camerawork and Alec Guinness as Herbert Pocket. Replacement would have to be Brit, and young at the time. How about Marius Goring, the ernest conductor in The Red Shoes?

3. Tom Hanks in The Da Vinci Code
Hanks is one my all-time favourites, but he lacked energy and a certain Indiana Jones-ness in this movie. A terrific replacement, to my mind, would be the talented Hugh Laurie, who's proved more than capable of putting on an American accent when required.

4. Paul Dano in There Will Be Blood
PT Anderson is almost as good a caster as his friend, Quiten Tarantino, this is the only role I can recall where I feel he slipped up. Dano tries hard, but Daniel Day-Lewis's performance is monstrously powerful, and Eli ends up seeming weak. Edward Norton would have fit the bill a lot better in my book (though he's a bit old). And how about Jesse Eisenberg?

5. Richard Gere in Days of Heaven
It's a magical, painterly film, but Gere doesn't make half the impact he should, and Sam Shepard's low-key performance overtakes his easily. John Travolta, originally considered for the role, might have brought more charisma to the table, as might Jeff Bridges, or even (I'm going out on a limb) Kevin Costner.

6. Norah Jones in My Blueberry Nights

Wong Kar-Wai had had some success with casting pop stars in lead roles before (most notably Faye Wong in Chungking Express). It backfired, however, with the beautiful but visibly nervous Norah Jones in this, his only English-language film. Cat Power's chemistry with Jude Law in a small cameo indicates that Kar-Wai may have cast the wrong smoky-voiced singer in the lead role. Natalie Portman (there's also Rachel Weisz, in case you think this film could accomodate any more astoundingly beautiful women), stealing scenes like a professional thief, would have done even better.

This beauty a dipping neophobia

Let it all hang out

Just about the funniest song I've ever heard. This is the 1967 original by The Hombres.

A John Mellencamp cover of the same. Adds little in terms of musical value, but the video is sexy and hilarious, qualities that make it a perfect fit for this song.