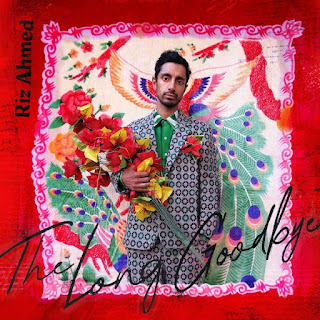 In 1985, on a track called "This Is England", Joe Strummer of The Clash offered a typically blunt picture of racism: Big British boots go kick Bengali in the head / Police sit watching, the newspapers being read. Thirty-five years later, on "Can I Live", Riz Ahmed raps: Buried in a English field, they can’t dig us out/ Riots, we turned Bradford to Karbala—a reference to the 2001 Bradford riots, where the Asian community clashed with far-right groups. It would seem not much has changed since Strummer’s scathing indictment of his own country. The only difference is that British Asians have the mic now.

Ahmed’s new album, The Long Goodbye, is a remarkable work. The rapper and actor, whose parents are Pakistani but who grew up in England, gives voice to the confusion, rage and hurt of the Asian-origin communities there. The impetus might be the long build-up to Brexit and the pain it has caused for anyone seen as not sufficiently British, but the album is also a reminder that the country’s association with the subcontinent began on an unequal footing, and has largely remained that way.

Ahmed finds the perfect metaphor for this: A lover’s lament for a toxic relationship that’s finally ending. Britain’s broken up with me are the first words on the opening track, "Shikwa". Over a gentle wordless sample of Nusrat Fateh Ali Khan singing, Ahmed addresses England as a discarded lover, mournful at first, then increasingly agitated and choked up. It’s the fleetest of history lessons, moving, in a few paragraphs, from the Mughals to Partition to immigrants in the UK, as “Brittney" takes his money, carves him up, ruins his future ("my cashmere jumper’s still stained red")—but he can’t leave her.

Shikwa is named for a poem by Allama Iqbal, the spiritual father of Pakistan. Ahmed pays tribute to another Pakistani writer on the next track. Like Saadat Hasan Manto’s Toba Tek Singh, neither in India nor in Pakistan, Ahmed too feels like he’s in no man’s land, a Britisher who isn’t wanted in Britain. As if to illustrate the gulf between Iqbal and Manto, "Toba Tek Singh" opens with sirens and a violent motif, four notes that sound like a stabbing. Ahmed is still talking about his lover, but now he’s mocking, defiant. She wanna kick me out/ but I’m still locked in/ What’s my fucking name?/ Toba Tek Singh.

Ahmed has always been a political artist. He came to wider notice with the 2006 track "Post 9/11 Blues", which has a sense of anger and betrayal similar to his new album. The first single of the 2016 Swet Shop Boys (a duo he formed with Indian-American rapper Heems) album, Cashmere, was "T5", which pokes fun at airport checks targeting dark-skinned travellers. You can see it in his acting career too. His first role was as a prisoner and torture victim in The Road to Guantánamo, and he has since acted as a would-be suicide bomber in the comedy Four Lions and as an increasingly radicalized Pakistani man in The Reluctant Fundamentalist.

Minus the jokey presence of Heems, Ahmed allows himself to access emotional places that might not have been possible on a Swet Shop Boys album. "Can I Live" starts with him acknowledging that things have changed as far as British Muslim representation in entertainment is concerned. But the second half of the song turns that pride inward, as Ahmed wonders if he has betrayed his people through his very success. Am I putting my foot down, or tap dancing for the man?/ All the scars on my heart earned me 50 grand. The phrase from "Toba Tek Singh" returns: No man’s land, I’m no land’s man.

Six of the 15 tracks are spoken word interludes, styled as voice messages left for Ahmed by people concerned about his break-up. There are guest spots by Mahershala Ali, Mindy Kaling and Hasan Minhaj, and a message from Ahmed’s mother, who asks him to come home. This, though, is the tragedy of The Long Goodbye: Britain is Ahmed’s home, but he keeps getting asked where he’s really from. It makes him wonder: Maybe I’m from everywhere but nowhere/ No man’s land, between the trenches, nothing grows there.

The Long Goodbye is accompanied by a 11-minute film with the same title, directed by Aneil Karia (you can see it on YouTube). An Altman-like domestic scene with a British Asian family is shattered when Ahmed sees a van pull up and men with guns jump out. “They are rounding people up, it’s happening," he shouts. It’s too late. His family is dragged on to the street, men made to kneel, women and children shoved into a van. The police stand by, watching impassively. Ahmed is shot running to his younger brother; the other men are executed. As the van pulls away, Ahmed starts to choke out the lyrics to "Where You From", ending up talking straight to the camera.

This is a scene many listeners should be able to recognize: children separated from parents, armed militia acting with the tacit approval of the state. It’s a harrowing companion to an album that feels entirely, urgently, of its moment. Perhaps the production from Redinho could have been a touch bolder—apart from "Toba Tek Singh", there’s nothing here to match the manic beauty of his Swet Shop Boys collaboration "Aaja". But it’s enough to have Ahmed spitting his heart out, switching between languages, voicing the pain of a community: Didn’t get lucky I’m/ Straight outta luck now/ Apnay stay up now/ Sapnay stay stuck now.

This piece appeared in Mint Lounge.
Posted by a fan apart at 3:56 AM