Because the sun is now rising and because it is somehow comforting to write about all this even when you know no one is reading and because my teacher told me never to start a sentence with because because said I yes she said no no because said I indicating through appropriate changes in inflection that I meant it as a question are you trying to be funny she said accompanying it with a wayward fling of the duster which went and ricocheted off the one hundred and fifty year old wall dislodging plaster which had seen seven floods and several generations of schoolboys with compasses in its proud history but now I am digressing and time is short because my brain is shouting SLEEPYTIME and my arms are weary SLEEPYTIME and my eyes are closing SLEEPYTIME but not yet not before I tell you how I traveled from Jaipur to Allahabad to Hyderabad to Mysore to Ahmedbad to Kolkata in the space of two weeks for that is my job and yes I know the first year is tough and is supposed to build character and no I don’t really believe that crap anyway I don’t care much for the travel and I don’t like talking to people I do not know unless they happen to be particularly interesting or beautiful and if that makes me a misfit in my current profession let me assure you no one is more keenly aware of that than me anyway there were some worthwhile moments especially Bhavnagar where prosperous shopkeepers cancelled interview appointments and we finally ended up speaking to a man who asked if we really wanted to because he was a Harijan and for once I felt I could genuinely say it would be our pleasure and then there were those Citra bottles remember Citra I miss Citra I also miss Gold Spot but not Campa Cola and then there were remembrances of trips past but I’ll probably tell you about that some other time because my head is heavy SLEEPYTIME and my heart is aching SLEEPYTIME and the sun is rising SLEEPYTIME
Posted by a fan apart at 9:30 PM 1 comment: 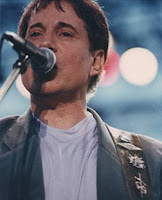 My favourite lyricist, or rather, the lyricist whom I'd want to write like the most. The song, of course, is from his deservedly famous, genre-blending album Graceland. Unlike, say, 'Calling Elvis' or 'Walking in Memphis', reference to The King's home does not define the song here. Instead, Paul Simon pays Elvis back for providing him his early inspiration by giving Graceland the respect it deserves, seeing it in terms of a promised land rather than the scene of Elvis' last bloated years. The definitive version, for any fanatical Paul Simon fans ('is there such a kind, girl, seems so hard to find...') is the live version from Paul Simon's Concert in the Park, not to be confused with Simon and Garfunkel's Concert in Central Park, which is a whole different case of brilliance, and I have to work, bye...

The Mississippi Delta was shining
Like a National guitar,
I am following the river
Down the highway
Through the cradle of the civil war,

Poorboys and Pilgrims with families
And we are going to Graceland,
My traveling companion is nine years old
He is the child of my first marriage,
But I've reason to believe
We both will be received
In Graceland,

And my traveling companions
Are ghosts and empty sockets
I'm looking at ghosts and empties,
But I've reason to believe
We all will be received
In Graceland,

There is a girl in New York City,
Who calls herself the human trampoline,
And sometimes when I'm falling flying
Or tumbling in turmoil I say
Whoa so this is what she means,
She means we're bouncing into Graceland,
And I see losing love
Is like a window in your heart,
Everybody sees you're blown apart,
Everybody feels the wind blow,

In Graceland Graceland,
I'm going to Graceland,
For reasons I cannot explain
There's some part of me wants to see
Graceland,
And I may be obliged to defend
Every love every ending
Or maybe there's no obligations now,
Maybe I've a reason to believe
We all will be received
In Graceland
Posted by a fan apart at 5:15 AM 2 comments:

The concept of the memory of sunny afternoons

All those years ago, and it feels like yesterday. Six of us on Udayan's roof, playing cricket and listening to Automatic for the People for the first time on a brilliant sunny afternoon. I'm sure I would have loved R.E.M no matter which setting I first heard them in - that band was drawing me towards itself long before I started listening to decent music. The first R.E.M track I heard was Crush With Eyeliner, sometime in middle school; the next, seven years later, was Losing My Religion. I loved both equally, and it drove me nuts to think that a band could sound so unbelievably different from song to song.

But Automatic was special. For all its images of death and old age and elegies to tragic heroes, there's an uplifting, almost spiritual quality to most of the songs - Everybody Hurts is the radio-friendly example, though Sweetness Follows is ultimately more cathartic. That's not to say that R.E.M is invoking Jesus (they're agnostic - remember Talk about the Passion). What they do here instead is what they have always done in their songs: zero in on specific moments, and then, through straight talk and epigrams, discordant notes and aching melodies, capture them in a snapshot. "Their world has flat backgrounds and little need to sleep but to dream", sings Stipe on The Sidewinder Sleeps Tonight, giving a voice to all those who go through life envying cartoon characters. Sweetness Follows, with its powerful waves of feedback sounds exactly like a family mourning its dead, yet trying at the same time to handle the whole affair with dignity.

So I fell in love with the album on that sunny afternoon. I also fell in love with the concept of the memory of specific, memorable sunny afternoons spent with friends, the impact of which you realise years later when the friends are no longer around, but the memories stick around like friendly ghosts. I have since expanded this concept to include other times of the day (mornings, evenings, three in the night), different kinds of weather (windswept but sunny, balmy and buzzing with mosquitos) and new forms of interaction (furtive meetings, heart to hearts).

Its sad, though. After trying to write about one here, and shaking my head at the results, I'd agree with Paul Simon saying "I know they'd never match my sweet imagination...everything looks better in black and white". You just had to be there...
Posted by a fan apart at 10:00 PM 4 comments: