After years of treating it as a pathway to the other side, it was a bit of shock to realise that Defence Colony Market has a nice park down its middle. It was clean, and the shrubbery actually looked like it’d been tended to. It was on this lawn that a projector was set up, pointing at the wall above Soi, Thai & Burmese restaurant. A string of lights, left over from Diwali, hung down, obscuring the “&” as well as the pale green logo of A Wall is a Screen.

A Wall is a Screen originated in Hamburg in 2003, when three filmmakers decided to project short films onto the walls of the City Centre there. Since then, the same has been done in a few dozen countries around the world, and on just about every surface imaginable. When the Delhi venue was announced as Def Col Market, I wondered what they’d be able to do with that crowded, rather indistinct crush of bars and restaurants.

6.55pm. Some 20 odd people have gathered in the park. Most of them sound German (Max Mueller Bhavan is co-organising), though there are a few locals as well. The first screening begins, a pounding animation inspired by Blake’s “Tyger Tyger”. It’s over in five minutes – most of the films were about that length – and a couple of crisp, friendly announcements are made, first in English, then in Hindi. The organisers are clearly keen to draw in casual onlookers; there’s no sign of the cliqueshness that sometimes happens with foreign cultural centre events.

Two short screenings on the adjoining wall, and we make our first location shift. By now, the crowd’s gained some 15 members; it’s diversified to include a baby in a pram, a couple of interested-looking grandmothers, and smatterings of German, French, English and Hindi. We stop in the lane opposite Barista, and watch a rather disappointing Irish Bollywood spoof (a drunker heckler saying something about knowing Lata Mangeshkar was more entertaining). The next projection was on a private wall. The film, the announcer explained, was on German houses, so they felt it was fitting to layer it on an Indian house. One of the owners came out mid-film to scattered applause. By now, the crowd was closing in on 50.

The organisers continued to match wall and film; an animation on waste disposal was screened near a garbage dump, while Motodrom, with its gritty black-and-white images, was perfect for the crumbling, whitewashed-a-decade-ago facade beside the Orient Bank ATM. People sat on parked scooters and bikes and tried to make sense of the flickering images. Rickshaws passed on the road behind us, their passengers craning their necks. A couple of policemen looked on from a distance. An auto-driver was moved by the mention of Yamuna to emerge from his vehicle and tell whoever would listen exactly why the river was so dirty. And a young MBA graduate came up to me – incorrectly assuming that I’d been dragged here against my will – and asked if I went to these kinds of things often.

The last surface, in a break with tradition, wasn’t wall as screen, but just a screen. This was placed in the park at the head of the market. We sat in its mini-amphitheatre (which I didn’t know existed – I’d never even noticed this park before), and watched an entirely charming short about mobile cinema in Calcutta. As I stared up at the white canvas, I suddenly understood why A Wall is a Screen was such a success wherever it went. It reminds us of how we used to watch movies as children, heads raised, looking up in wonder.
Posted by a fan apart at 12:40 AM No comments:

Just this month, Wisden announced that it would be launching an India edition in early 2012. It’s a measure of the times we live in that this announcement went out, to quote Douglas Adams, in a blaze of no publicity at all. Two decades ago, the news would have had Indian cricket fans out in the streets, waving their floppy-brimmed hats. But today, there’s Cricinfo and relentless TV programming and mobile applications to fill in the gaps – and that’s assuming fans here are still reading anything longer than Yuvraj Singh tweets. And what’s an almanack anyway?

The Wisden Cricket Almanack is the game’s one holy book. It was first published in 1864, and has come out every year since, making it the longest-running sports periodical in history. Since the game’s beginnings on the village greens of England, Wisden has been its most faithful scribe, and generation after generation have set its pronouncements in stone. Despite this God-like reputation, it would be unwise to view Wisden on India as a definitive history of cricket in this country. This is, at best, a selective history of Indian cricket, seen largely through British eyes. Compiled by writer Jonathan Rice, it brings together all the major reporting on Indian cricket that’s appeared in Wisden over the years, starting with the Parsee tour of 1886 and ending in 2009, with Virender Sehwag as Leading Cricketer in the World.

In Beyond a Boundary, arguably the greatest cricket book ever, CLR James wrote about how, at one point in his life, he was so much “on the alert for discrimination” that he would underline anything said against the West Indian team in his copies of The Cricketer. Reading Wisden on India might stir similar feelings in history-conscious Indian fans. There are some major omissions – Palwankar Baloo and his 118 wickets at 18.11 apiece on the 1911 tour of England are barely mentioned. The tone, especially in the early years, is often patronising (for instance, the vague mention of a “want of harmony” in the touring team of 1936, followed by the sage advice: “If a team of India cricketers is to be successful, differences of creed will have to be forgotten”). There’s also a tendency, noted by Rice, to detail the exploits of blue bloods who merely dabbled in cricket in India.

But for every real or imagined slight, there are substantial rewards for the patient reader. Some are in plain sight, like the two guest articles by Vijay Merchant, the first great Bombay batsman. One is an overview of the first two decades of Indian cricket, the second an exhortation to the 1959 touring side titled “India, Be Bold!” (They weren’t, and lost the series 5-0). Others are buried treasure: the last line in the obituary of the Iftikhar Ali Khan Pataudi predicts a bright cricketing future for his then 11-year-old son. Mansoor Ali Khan “Tiger” Pataudi, who passed away this month, led India to its first series win in 1962.

Wisden on India is not for the casual fan. There’s a lot of statistical information, and little by way of anecdote. The Almanack’s writing, until recently, has never been of the flashy sort, and several pages go by without any verbal flourish. Serious readers may be disappointed by the lack of literary heavyweights in this collection. Neville Cardus and John Arlott wrote for Wisden, and about Indian cricketers, but never, it seems, at the same time. RC Robertson-Glasgow, Matthew Engel and John Woodcock only make cameos. There are, however, some memorable pieces by famous Indian cricket writers. Ramchandra Guha (whose A Corner of a Foreign Field Rice calls “by far the best national cricket history yet published”) hypothesises hilariously about Mahatma Gandhi’s cricketing career, while Mihir Bose does a spot-on bit of crystal ball-gazing, predicting, back in 1997, the impact Indian money would have on the game.

Wisden is obviously committed to striving to keep up with changing trends. In recent years, its pages have featured articles dedicated to the intricacies of powerplays, as well as a loosening of style (to the extent of including an explicit tweet by English pacer Tim Bresnan in the 2010 edition). If this book and their Wisden India plans show that they’re not above tapping a lucrative market, it also indicates their desire to not just survive the brave new world of modern cricket, but also remain the authority on it.

The year was 1941. After conquering Broadway and scaring the living daylights out of America with his “War of the Worlds” broadcast, Orson Welles was busy making his first feature film. Because he was already a celebrity before he arrived in Hollywood, he’d managed to negotiate a contract with an unprecedented measure of freedom. The film, then titled American, was about the spectacular rise and fall of a media mogul called Charles Foster Kane. It cost under a million, starred Welles’s cohorts from Mercury Theatre, and contained every manner of innovation, from overlapping dialogue to Gregg Toland’s stunning depth-of-field camerawork.


It’s been 70 years since then, but Citizen Kane – regarded by many as the greatest film ever made – hasn’t aged. One can only envy the uninitiated viewer, encountering, for the first time, Herman J Mankiewicz’s crackling dialogue, with its parodies of “Timespeak” and jabs at Hearst, the audacious, fractured narrative and the lively performances, all the way down from Welles as Kane to Agnes Moorehead’s few odd minutes of screen time. As for those who’ve seen the film enough times to have Bernstein’s speech about the girl in the white dress down verbatim, there are two excellent commentaries by critics Peter Bogdanovich and Roger Ebert included on this DVD.

There are several ghosts hanging over the 70th Anniversary Edition DVD of Citizen Kane. The first is Kane himself, or rather, the person he was based on – William Randolph Hearst, real-life media baron and a pioneer of yellow journalism. The second is Orson Welles, who directed this film at the age of 26, and died 26 years ago, striving till his last days to divert the public’s attention from Kane to his other excellent films. The third, and most obscure, is film critic Pauline Kael’s polarising 1971 article “Raising Kane”, which suggested that Mankiewicz had a major role in shaping the film. The article is mentioned by both commentators: Ebert calls it “lovely” and seems to agree with Kael’s assessment that the “Rosebud” device was a gimmick, while Bogdanovich caustically remarks that it “showed how wild some critical opinions could be”.


Viewers who’ve seen the film but are unfamiliar with the mythos of Kane – Hollywood’s jealousy of wonder boy Welles, the closed sets that concealed the film’s explosive subject matter, the blacklist of the film by the Hearst press – would probably want to hear Ebert’s commentary track, with its nonstop barrage of information, first. Ebert is particularly effective at explaining how Welles created such a grand-looking film on a relatively modest budget. One of his opening gambits is particularly fascinating; he mentions that this movie has as many special effects as Star Wars, it’s just that they’re invisible.

Bogdanovich, on the other hand, uses to his advantage the fact that he was a Welles confidante in the master’s later years (he interviewed him for the book This is Orson Welles). Many of his pronouncements come with the “Orson said” tag, making the track less exhaustive, more intimate. Of the many anecdotes he narrates, one is particularly resonant. Once, when Welles was talking about Greta Garbo, Bogdanovich mentioned what a pity it was that she’d only been in two really great movies. Welles stared at him for a while, and then said, “Well, you only need one.” 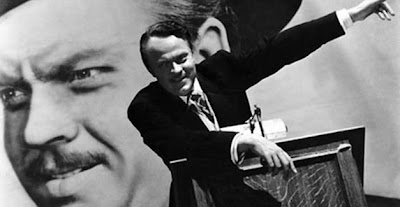