You know what they say: Once the hundred's up, you need to stop playing defensively...
Posted by a fan apart at 5:16 AM 5 comments:

Jean-Luc Godard's 1959 article heralding the new wave. Still shy of his first feature as director, but supremely confident, he sounds like he's been asked to play a bugle on the battlefield before the fighting starts, which he does loudly and without mercy. Everyone should sound this charged up by their work...

“The Face of the French Cinema Has Changed”

Godard wrote this New Wave battle cry for the April 22, 1959, issue of the French journal Arts, on the news of François Truffaut’s The 400 Blows being selected to represent France at the Cannes Film Festival (thanks to the machinations of French culture minister and New Wave champion André Malraux). The year before, Truffaut had been barred from as a critic because of his Cahiers du cinéma attacks on the festival.

As soon as the screening was over, the lights came up in the tiny auditorium. There was silence for a few moments. Then Philippe Erlanger, representing the , leaned over to André Malraux. “Is this film really to represent at the festival?” “Certainly, certainly.” And so the minister for cultural affairs ratified the selection committee’s decision to send to , as ’s sole official entry, François Truffaut’s first full-length feature, The 400 Blows.

What matters is that for the first time a young film has been officially designated by the powers that be to reveal the true face of the French cinema to the entire world. And what one can say of Truffaut could equally well be said of Alain Resnais, of Claude Chabrol if Les cousins had been chosen to represent at , of Georges Franju and Head Against the Wall, of Jean-Pierre Melville and Two Men in Manhattan, of Jean Rouch and Moi, un noir. And the same words apply to other Jeans, their brothers and their masters: Renoir and his Testament du Docteur Cordelier, and Cocteau, of course, had Raoul Lévy at last made up his mind to produce Testament of Orpheus.

The face of the French cinema has changed.

Malraux made no mistake. The author of La monnaie de l’absolu could hardly help recognizing that tiny inner flame, that reflection of intransigence, shining in the eyes of Truffaut’s Antoine as he sports a man’s hat to steal a typewriter in a sleeping Paris; for it is the same as that which glittered twenty years ago on Tchen’s dagger on the first page of La condition humaine.

The director of L’espoir was better placed than anybody to know what this reflection meant: the principal form of talent in the cinema today is to accord more importance to what is in front of the camera than to the camera itself, to answer first of all the question why, in order to then be able to answer the question how. Content, in other words, precedes form and conditions it. If the former is false, the latter will logically be false too: it will be awkward.

In attacking over the last five years in these columns the false technique of Gilles Grangier, Ralph Habib, Yves Allégret, Claude Autant-Lara, Pierre Chenal, Jean Stelli, Jean Delannoy, André Hunebelle, Julien Duvivier, Maurice Labro, Yves Ciampi, Marcel Carné, Michel Boisrond, Raoul André, Louis Daquin, André Berthomieu, Henri Decoin, Jean Laviron, Yves Robert, Edmond Gréville, Robert Darène . . . what we were getting at was simply this: your camera movements are ugly because your subjects are bad, your casts act badly because your dialogue is worthless; in a word, you don’t know how to create cinema because you no longer even know what it is.

And we have more right than anyone to say this. Because if your name is emblazoned like a star’s outside the cinemas on the Champs-Élysées, if people now talk about a Henri Verneuil film or a Christian-Jaque just as they talk about a Griffith, Vigo, or Preminger, it is thanks to us.

To those of us who on this paper, in Cahiers du cinéma, Positif, or Cinéma 59, no matter where, on the back page of Figaro littéraire or France-observateur, in the prose of Lettres françaises and sometimes even the schoolgirl stuff of L’express, those of us who waged, in homage to Louis Delluc, Roger Leenhardt, and André Bazin, the battle for the film auteur.

We won the day in having it acknowledged in principle that a film by Hitchcock, for example, is as important as a book by . Film auteurs, thanks to us, have finally entered the history of art. But you whom we attack have automatically benefited from this success. And we attack you for your betrayal, because we have opened your eyes and you continue to keep them closed. Each time we see your films we find them so bad, so far aesthetically and morally from what we had hoped, that we are almost ashamed of our love for the cinema.

We cannot forgive you for never having filmed girls as we love them, boys as we see them every day, parents as we despise or admire them, children as they astonish us or leave us indifferent; in other words, things as they are. Today, victory is ours. It is our films that will go to to show that is looking good, cinematographically speaking. Next year it will be the same again, you may be sure of that. Fifteen new, courageous, sincere, lucid, beautiful films will once again bar the way to conventional productions. For although we have won a battle, the war is not yet over. 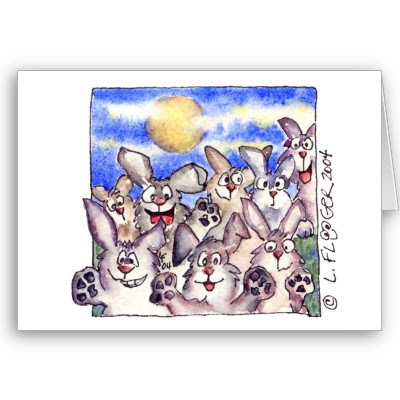 Since five out of my last seven posts have centered around susbstance addiction, crippling self-awareness, visions of mortality, impending death and philosophical alienation, it seemed important that I do a post which has happy rabbits in it.
Isn't life all fluffy now?
Posted by a fan apart at 12:23 AM No comments: 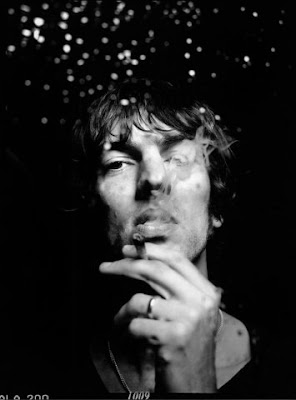 The seduction
A lucid dream. Not some drugged out room filled with negativity. A simple fix. Pop the pill, forget about the rest. Let Dr. Robert worry. Butterfly with tangerine wings, caught in the strobe lights, chrysalis confused. Chase it down. In your lucid dream.

The truth
“We are the rolling people. Don’t know why”
“Where all the veins meet...”
“I called the doctor so he could relieve my pain. He has a little pill for me, just a little luxury”
“Weeping willow, pills under my pillow”
“This is a fix. FUCK YOU. THIS IS A FIX. FUCK YOU. C’MON”
“Into the headlights. Another velvet morning for me”
“JUST LOST SOMEBODY IN THE BACK”
“Don’t you find that its lonely?”

The wisdom
Life is not simple. There are easy ways to arrive at this conclusion. The object of your affection could return the favour with a little less enthusiasm that you would have liked. Like that movie. You could hate your job. Like that song. You could make so many compromises that your every move is shadowed with self-doubt. Like that year.
There are other ways to reach this conclusion as well...
Knowing that someone you love is going to die, and that the drugs will not help this time.
Realising that its not possible to walk through life and avoid bumping into people.
Experiencing that feeling of release. Two guitars, bass, drums. Epiphany...and then poof. It’s gone. True pain captured, sold to a world starving for something real, only to find that they ate it, found it bitter, spit it out.

The pain
"Richard, towering over the rest of the bobbing crowd, looked around wildly. This was a signal for whoever of us weren’t wasted to go to him. Talk to him, reassure him he wasn’t through the looking glass, that there was no giant butterfly in the loo, no rabbit with a machine gun at the door. Today was bad though, he just sat down in the middle of the club floor. My feelings have been betrayed, he kept yelling out. I was born a little damaged, look what they made. Cold-blooded as it sounds, I knew that would end up in a song.
Later, that evening we took a ride home in Simon’s beat-up Chevy. Richard kept putting his head through the window and yelling at the passers-by. We had one serious scare. We stopped for cigarettes, and everyone except Rich left the car for a few minutes. When we got back, he was missing. A few minutes later, we heard a noise above our heads. It was him, sitting up on the roof, saying ‘Bow down’ again and again. We freaked, raced up, persuaded him to come down. He didn’t protest much, seemed more numb that anything else. Was jumping on his mind that day? I don’t think so. Suicide wasn’t his thing..."

The schism
The fact is that I don’t know shit about what I’m saying. I only know sound and the worlds inherent. But that’s not enough. I don’t know uppers. Downers. X. LSD. Coke. Shrooms. Hash. I know not of these worlds, and it informs the fact that I am attempting to write about them. But I still try. I need to hear some sounds that recognise the pain in me, even if I can’t relate to the pain in them.
But there will always be that gap, because I cannot put myself through any of it. There’s too much at stake. But if I were to feel tempted, the only reason I would not do it would be because I don’t have the guts. This will always trouble me.
Posted by a fan apart at 2:45 AM 2 comments: 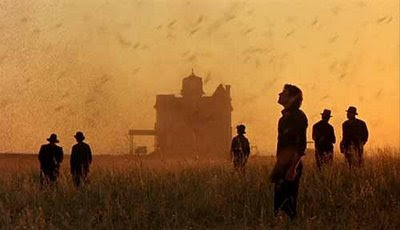 Terrence Malik's second feature. Thanks to Nestor Almendros' cinematography, perhaps the most visually ravishing colour film to emerge from Hollywood.

Watch out for: The distance shot of a train on a bridge, billowing black smoke sillhouetted against the blue sky 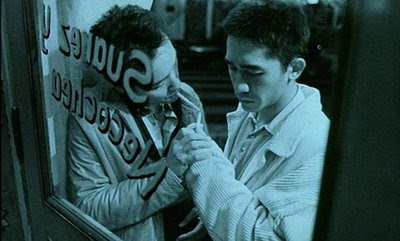 Does Wong Kar Wai conceive his movies as stories or as a series of interconnected images? This film will lead you no closer to the answer. Needless to say, it doesn't matter. Plus, props to him for making a movie about a gay couple without the word 'gay' being mentioned even once.
Watch out for: The music. A crazy mix of tangos, pop numbers and rock instrumentals
3. Entourage, Season 5 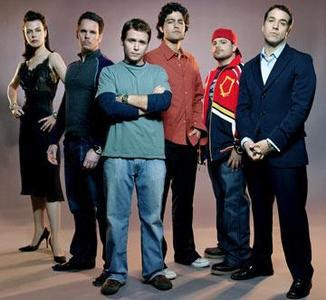 Anyone who follows this space knows how seriously I take my Entourage-watching. So hear this: Season 5 took the best programme on television and raised it to a whole new level of brilliance. The stakes are higher than ever before, and everyone raises their game. Also, I may not believe in God, but I sure as hell believe in Ari Gold.

Watch out for: Um...Episode 5 (the best stand-alone episode after Resurrection), Episode 7 for that scene at the airport, Episode 8 for its ending, Episode 12 for.... 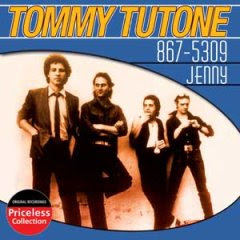 Tommy Tutone recorded this in the '80s, its apparently a famous one-hit wonder. Its a good one-hit wonder too - solid, hooky, muscular. It sounds very Springsteen-derivative, but then it dawns on you that Sprinsteen's excellent 2007 single 'Radio Nowhere' sounds A LOT like this.

Watch out for: The dearth of singles like this on the radio today
Posted by a fan apart at 10:37 PM 2 comments: