In the past twenty years or so, India has sent distinguished films like Bandit Queen, Salaam Bombay and Lagaan as its official Oscar entries. It has also somehow managed to pick clunkers like Jeans and Eklavya. What is common amongst the films that get nominated is that, either through the dint of being big-budget releases or because they are path-breaking enough to generate a cult following, they usually get seen by a wide audience long before their actual selection. This year’s nominee may be unique in the way it actually needs the buzz its selection has generated, whatever little of it there may be.

Harishchandra’s Factory is a relatively modest production, in Marathi, with subtitles. It has no known faces acting in it. It’s set in the 1920s, and captures that period with the minimum of cinematic flourish. In telling us the story of how Dadasaheb Phalke made India’s first film, it takes potentially ponderous biopic material and handles it as lightly. There are some hilarious moments – the one where Phalke is convincing his actor to shave off a moustache was my favourite – but there are also hints about how difficult the journey must have been for Phalke and his family. These moments are handled much better here than they would be in movies with larger budgets and over-eager background scores. And though the comedy is at times broad, it never degenerates into farce.

There’s a lovely moment that occurs just before the first shot of the first scene of the first Indian film. The crew has gotten off from the train that has brought them to their location, Phalke is the last to alight. As he does, he says a line that may have been part of his movie script, but is beautifully apt for the task he is about to undertake. “Today I will tear the heavens apart” he says, and the camera cuts. It’s a tiny moment, and the only real bit of self-indulgence the director allows his character, but you can feel his fondness for Phalke come through. Biopics often get mired in reverence or cross-examination, this one floats along on the helium of its own good natured enthusiasm.

This is not really a review – I saw the movie at the Osian Cinefan yesterday, and I just wanted to give it a small shout-out. I am also afraid that this movie, one of the nicest, most cogent and least mannered films to come out in recent times may need other, more influential shout-outs if it is to reach the magnitude of audience it deserves. One hopes this is achieved - it would be a fitting way for the world’s largest film industry to pay back the man who started it all.
Posted by a fan apart at 9:48 AM 1 comment: 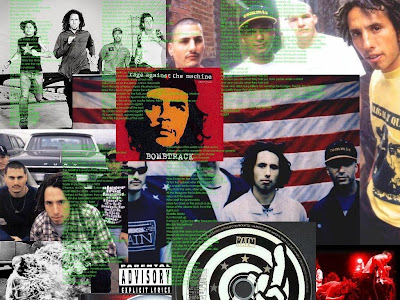 There are exactly three bands whose music consistently puts a great big smile on my face. The first two are the Beatles and R.E.M. The third, for reasons I am completely at a loss to explain, is Rage Against the Machine. I was reminded of this while hearing ‘The Battle of Los Angeles’ today in my car. It obviously makes little sense because a) RATM doesn’t sound remotely similar to either R.E.M or the Beatles and b) you’d be hard-pressed to describe RATM’s music as epiphanous. Yet I have experienced multiple epiphanies (men can get those) hearing their four studio albums, a legacy the same size as that of the Velvet Underground, and perhaps in years to come, as influential (for good bands too, not the thousands of horrendous rap-rock acts they inadvertently spawned).

Rage Against the Machine is great agit-prop, but I like them for other reasons I consider more pertinent. For starters, they’re a great band, unlike most of their unworthy predecessors. Zach De La Rocha is not just a great mc, he’s a great vocalist. He doesn’t just shout, he shouts in ways that are unique and varied. He yells, he screams, he hisses, he growls. He is in that select group of singers – Dylan is the best example I can think of offhand - who can convey the mood of a song through the tone of their voice. Sometimes it’s a stray word, like “Warning!” from ‘Born as ghosts’ or the “Hey’s” from ‘Sleep now in the fire’. How big a leap from John Lennon raggedly shouting "Well shake it up baaaby nooww” to De La Rocha screaming “Fuck you I won’t do as you tell me”? A lot closer than you think…

Chuck D is the obvious (and acknowledged) influence as far as his rapping style is concerned, but De La Rocha’s voice is more mobile. No singer in history has ever sounded so urgent, so convinced of his material. He sounds transported, and that becomes transporting for the listener. "This is the new sound, just like the old sound" I hear him say as I write these lines. Not exactly a new sentiment, even Billy Joel’s said something similar. But then he says it again. Then he goes “Look at the news now…over the over the over the BURNING GROUND” and I don’t know why, but I find myself shouting with him.

The sonic universe that RATM’s fiery words inhabit could best be described as apocalyptic - rather like the words themselves. Alternating between the weirdly haunting and the crunchingly loud, they are, to use their own wonderful phrase, calm like a bomb. The chief architect of this sound is the still underrated Tom Morrello. He’s a true futurist - his guitar approximates the sound of a turntable, a siren, a buzzsaw, a human voice. He’s also a throwback - to players like George Harrison and Robbie Robertson, who played as much and for as long as it served the purpose of the song, and not a second more. No matter how loud he gets, Morello is never messy and he never overplays. He creates textures with his guitar that would be the envy of entire bands. ‘Voice of the voiceless’ shimmers before it boils over, ‘Calm like a bomb’ sounds like police cars chasing you. By melding metal, grunge, scratchy hip-hop and various shades of noise, he created a sound that would come to be associated with him alone, because other guitarists didn’t have it in them to play it.

Morrello’s brilliance has a spill-over effect. RATM’s excellent rhythm section - Brad Wilk on drums and YKtim on bass - often gets overlooked. This makes them ripe for comparisons with another taleneted duo, Led Zepplin’s John Bonham and John Paul Jones, who faced similar charismatic-lead-singer-and-pathbreaking-guitarist-get-all-the-attention problems. But RATM would never have been quite the band it was if Wilk and YK were not up to the challenge. Rap-rock as a format was almost without precedent when they started out. By playing the way they did, supporting their idiosyncratic singer and their crazy scientist guitarist every step of the way, they helped create a template, the bedrock of the sound which would come to define rap-metal, nu-rock and alternative metal. But no one could play it quite like they did, in terms of both subtlety and swinging for the fence.

I could go on and on - I already may have - but I’ll stop here. Those of you who’ve already heard RATM know what I’m trying to convey and are probably praying that I stop talking so you can put on ‘Renegades of Funk’. Those of you reading this who haven’t heard them…well, if you’re a serious fan of rock music, you have no business not hearing them. Barring Radiohead, they are the most important post-grunge rock band. They credit themselves as ‘guilty parties’ on their album sleeves. They are uncompromising and fierce in everything they do. And, for some unfathomable reason, they make me smile.
Posted by a fan apart at 1:42 AM 6 comments:

Since this is, when you get down to it, a blog, and I am, when you come around to digging it, a blogger, I will now do a bloggy (or bloggish) thing and tell you what I’ve been listening to this past month.

Starting with the most recent, I picked up Roxy Music’s second album ‘For Your Pleasure’ last week. This was the last one with Brian Eno and it is appropriately weird, dense and seductive. Bryan Ferry makes sounding like Dracula a virtue, or makes it work at any rate, and his lyrics are funny as hell. Also grabbed at fervently by me was the Clash live album ‘From Here to Eternity’; I’d already heard their cover of 'I fought the law' off this, but none of the others. As expected, it was a riot. No punk vocalist has ever sounded more urgent than Joe Strummer, and Mick Jones is a perfect foil. Fans of unusual liner notes (an admittedly small sub-section of the music buying public) may enjoy this one - instead of some critic attempting to place The Clash and their music in a sociological context, we get quotes from the actual fans who attended these incendiary shows. Read them, hear the songs, and it’ll be difficult to not wish you were there.

Courtesy of Penfold, was turned onto this amazing Danish band called The Ravonettes via their 2007 album ‘Lust Lust Lust’. They have apparently been making melodic buzzing noises in indie circles for some time now, and while their antecedents are clear, it’s somehow comforting to know that there are still bands out there willing to play the sort of dreamy fuzzy pop that seemingly died out in the mid ‘90s. My Bloody Valentine and Jesus & Mary Chain are likely influences, maybe the Vaselines too. Where The Ravonettes differ from these bands is their unwillingness to bury the melody beneath layers of guitar noise – their distortions are more pleasant than abrasive. Pedantic shoe-gaze purists notwithstanding, this is not a negative, and their album should work for those who like their rock buzzy and laid-back and melodic.

It’s been a slow month for new singles. I’ve grown very partial to a John Mellencamp song called ‘Worn out nervous condition’. I should warn you though - besides a lovely seductive vocal by the Artist Formerly Known As Cougar, it isn’t really what you’d call remarkable. Maybe that’s the secret to its listenability – no hook that becomes a focal point, no corker of a line that distracts from all the others. Also, for no particular reason besides the fact that I heard it recently, please get hold of Cat Power’s revelation of a Dylan cover, ‘Stuck inside of Mobile with the Memphis blues again’. It’s on the ‘I’m Not There’ OST and she’s the only artiste on it who covers Dylan in a manner which could be called sexy (hear the way she says “…you’re just like me, I hope you’re satisfied”, it’ll make you smile out loud). The album is also top-drawer by the way.

What else…yes, finally bought ‘OK Computer’. Its absence was getting a bit too tough to explain to my conscience and besides, I love Radiohead’s second, ‘The Bends’. I’ve heard it only once till now, so it may be a bit premature to say this , but my feeling is that even though ‘OK Computer’ hangs together better conceptually and has undeniable greatness and importance running through its veins, it lacks some of that verge-of-conquest freshness that characterised ‘The Bends’. Anyway, one hearing isn’t enough for this one. Ditto for ‘Trout Mask Replica’, Captain Beefheart’s 1969 cult classic. I don’t know whether I’ll ever know quite what to write about that one (Sample lyric: "Fast and bulbous...that's right, the mascara snake, fast and bulbous...also a tin teardrop...bulbous also tapered...that's right")

Finally, to round things off…

In my dashboard: Aerosmith, ‘Get Your Wings’
In my Discman: The Byrds, ‘Sweetheart of the Rodeo’
In my to-buy shortlist: Mark Knofler’s new one ‘Get Lucky’
Posted by a fan apart at 11:27 AM 3 comments: