Fetch the Bolt Cutters: Pissed off, funny and warm 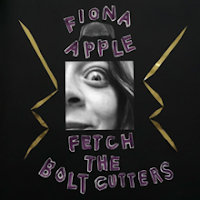 In the 2019 film Hustlers, Jennifer Lopez's stripper performs a show-stopping pole dance to Fiona Apple’s "Criminal". It’s an unusual choice of song, a dark, jagged number instead of a floor-burner. But it’s also apt. Part of the film’s charm is its cherry-picking of cultural ephemera to match its 1990s setting, and Criminal is certainly an off-kilter late-'90s moment. The scene made me think of Apple – something I hadn’t done in years – and wonder what she was up to. Turns out she was putting together what could be the best album of 2020.

It opens with Apple singing: I've waited many years/ Every print I left upon the track/ Has led me here. This seems about right: Eight years have passed since her last album, and Fetch The Bolt Cutters does feel like a reckoning, not to mention, in its more violent moments, an exorcism. Apple has always been a confessional songwriter, and on her fifth album (released 17 April) she whittles memories long past and recent, traumatic and comforting, into diamond-sharp vignettes.

This is an album built on percussion. The rhythm figures aren’t drawn from some exotic strain of world music, as they would be on a Vampire Weekend record, but they’re prominent and agile, with a skittishness that matches Apple’s nervous energy. The first sound on most of the tracks is Amy Eileen Wood’s drums – "I Want You To Love Me" begins with a series of clicks and clacks and gentle cymbal hits, "Rack of His" with four smart whacks, "Ladies" with a jazzy shuffle.

The band is small – Apple on vocals and piano, the inventive Wood on drums, Sebastian Steinberg on bass and David Garza on guitar. Everyone doubles up other instruments. Everyone does percussion. There’s an airiness to their playing that’s jazz combo-like, though the tracks themselves are tightly structured. The intimacy of a small band reflects in the recordings: you can hear breathing, the vibration of a double bass. Four dogs are credited with"backing barks". Apple cusses audibly at a mistake. It’s the most authentically homespun sound since The Basement Tapes.

Fetch The Bolt Cutters dares you to treat it as background music. There’s a constant sense of unsettlement: rhythm patterns abruptly change, often twice or thrice in the same song; vocal registers shift without warning. On "Newspaper", a complicated song about two women connected through shared bad experiences with the same man, harsh drums provide no relief from Apple’s ragged vocal. "I Want You To Love Me" closes with throaty squeaks, the kind of sound a wild bird, or Yoko Ono, might make. Sometimes it’s a word or a phrase that explodes: “strawberries" in "Heavy Balloon", “so much" stretched over eight syllables in "Rack of His".

The instrumentation is sparse, which places Apple’s rich contralto front and centre. She pushes it farther than ever before, unleashing a variety of growls, yelps, snarls and, particularly on "Drumset", throat-grazing John Lennon shouts. At times, the percussiveness and the delivery come close to rapping, or at least a lively poetry reading. The dense rhymes further this impression – On I go, not toward or away/Up until now it was day, next day could be a Q-Tip rhyme. Apple goes in other directions as well, ending the noisy Relay with wispy unaccompanied trills, singing “wipe it all away" like Snow White in the forest.

Some tracks lull you into feeling secure, then drop the bottom out of your world. "For Her" clatters along like a '50s girl group number, with handclaps and bright harmonies. The wordplay is dazzling: Look at how feathered his cocks are/ See how seamless his frocks are/ Look at his paper-beating over that rockstar/ Look at how long she walks and how far. Suddenly, everything comes to a halt. There’s a second of silence, then Apple bellows like a gospel singer: “Well, good morning! Good morning! You raped me in the same bed your daughter was born in."

Pitted against the darkness is Apple’s knack for pithy comic gems (I would beg to disagree/ But begging disagrees with me) and moments of hard-won happiness. On "Shameika", she recalls how a schoolmate once encouraged her, and transforms that memory and a couple of others into a self-affirming self-portrait: I'm pissed off, funny and warm/ I'm a good man in a storm/ And when the fall is torrential, I'll recall/ Shameika said I had potential.

This piece appeared in Mint.
Posted by a fan apart at 5:03 AM