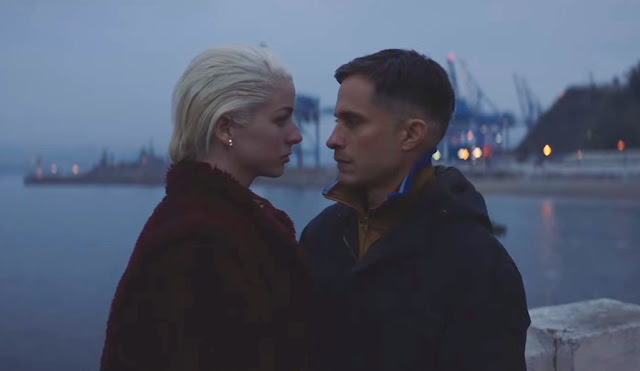 Pablo Larraín's Ema begins with fire, ends with family. On these two axes is plotted this strange, hypnotic, bruising film by the Chilean director. Gael Garcia Bernal plays Gastón, director of an arty dance troupe in Valparaiso. But it’s his wife, Ema (Mariana Di Girolamo), a dancer in his company, 12 years younger to him, who’s the unstable centre of the film. We see her in the street with a flamethrower in the first scene, and it only gets crazier from there.

The couple had adopted a young boy named Polo, but gave him back when he proved too wild (he burnt his aunt’s face). To make matters worse, it was Ema who – in Gastón’s version, though it’s believable – taught the boy to play with fire. She wants him back now, but the adoption agency isn’t going to repeat its mistake. “Surely he has another mom who’s better than you," a blunt official tells her.

Neither Ema nor Gastón seems fit to be parents: they’re barely keeping it together as human beings. Their relationship is coming apart spectacularly. “Right now Polo is shedding tears of rage because you abandoned him," Gastón tells his wife as they’re sitting in bed. When Ema says they both abandoned him, he replies, “It hurts a lot more to be abandoned by your mother." She accuses Gastón of turning his back on the boy when he was starting to trust him; he uses her line: “We both abandoned him." It’s like Scenes from a Marriage on uppers.

This conversation, or something very much like it, continues, after a musical interlude, in another scene, Ema and Gastón sitting in chairs across from each other (this sort of elliptical editing is typical Larrain). “You wanted him to burn the house down so I’d have to, I don’t know, give him back," he says. She blames the whole mess on his infertility. He says the boy only liked her because she flirted with him. “You fucked up my life," she tells him. “I was a little girl and you didn’t take care of me."

This would be an unwatchably caustic film had Larrain treated it in the spare, sober manner of his Post-Mortem (2010) or The Club (2015). Instead, he pitches it – visually, tonally, emotionally – right on the brink of sanity. Unlike his other films, this one is awash in colour, scenes popping with purple and pink and orange. Nicolás Jaar’s score pulses and seethes; the reggaeton Ema and her girl gang love to dance to thumps, rattles. Some of the images are straight out of a Lynchian dreamscape: a cat in the freezer, playground swings burning in the night, girls clambering over each other to sniff a barman’s chest.

The film has a fluid, freewheeling sexuality. Ema can’t seem to stop seducing people – a fireman, his lawyer wife, the principal of a school. In one scene, a member of her posse talks about wresting control from men. “I’m not interested in sex. I’m interested in emotion. I like the mess. The twisted power it has." When another friend asks Ema if she’s thought of her sexually, she says “All the time", then points to each of the girls in turn, saying, "And about you… about you…"

Bernal has worked with Larraín on two of the director’s best films, the Pinochet-era No (2012) and the Borgesian biopic Neruda (2016). Here, he plays a variation on his orchestra conductor from the TV series Mozart in the Jungle, someone as obsessed with detail and control of his group, but a considerably meaner spirit. Bernal has a great boomer rant about reggaeton and objectification, but otherwise cedes control of the film to Girolamo. She’s spectacular, with her white hair and astonishing mobile face, dancing like her life depended on it, setting literal and figurative fires.

Ema isn’t a film that always seems in control of itself – not surprising, given the on-the-fly methods adopted by Larraín, with dialogue written during the shoot and lines given to actors a day before, or on the day of, their scenes. But control seems like such a staid quality when you have a film this nasty, sexy and jolting. They only cause each other pain, yet Ema and Gastón’s movement is always towards each other. Like Phantom Thread, another film about a warring couple who just can’t quit, Ema ends up in a deliciously untenable place, with something familial rising from the torched remains of a relationship.

This review appeared in Mint Lounge.
Posted by a fan apart at 5:18 AM