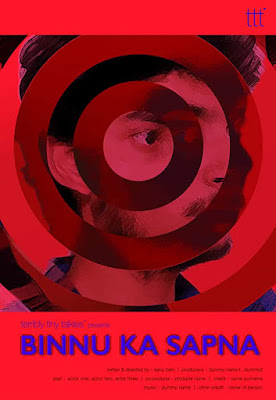 There has been an explosion of short film-making in India over the last couple of years. Some of it has been of high quality, aided by superior production values and committed performances. Yet, there’s a nagging feeling that most directors are angling, through these shorts, to prove what a competent job they would do with feature-length films (some have successfully made the leap). The tradition of using the short film as a sketch pad for radical ideas and techniques has not been in evidence.

Kanu Behl’s Binnu Ka Sapna, streaming on Mubi till 21 January, flies in the face of the safe, accomplished Hindi short. It perhaps helps that Behl doesn’t have to break into features; he has already made the superb full-length Titli, which premiered at the Cannes Film Festival in 2014. Binnu has similarities with Titli—at the centre of both is a young man trying to negotiate an oppressive familial environment. Both have a grimy look and scuzzy soundscape: I remember the feeling of wanting to wash Titli off me when I first saw it. But you can see Behl pushing the form in Binnu, seeing what works and filing the results away for his unmade features.
.
The first words we hear in the film are Binnu (Chetan Sharma), in a voice-over, telling us of his father’s temper. “Laplapa jaate the (he would be livid)," “Tattad-bhatad karte the (he would break things)"—innocuous-sounding words that hide, as we soon discover, a legacy of pain. Binnu has grown up hearing about the time his father slapped his mother for emerging, laughing, from a room at the same time as her brother-in-law. We see this curdled idea of masculinity passed on from father to son, as Binnu replicates the patterns of jealousy, inadequacy and violence in his own relationships.

It’s a simple idea, made provocative through form. There’s barely any dialogue in the film. Sneha Khanwalkar’s music (eclectic as always, with the highlight a beautiful moody ghazal) is woven into the nightmare sound design—the industrial buzzing that grows before the fateful slap recurs through the film. Binnu’s voice-over is affectless, even though his mental state is roiling. He’s like the frustrated Indian male in microcosm: unable to speak to his crush in college, unwilling to accept the frank interest of a woman later on, paranoid about what his girlfriend is wearing and whom she’s talking to.

The latent violence of the protagonist is reinforced by the film’s varied aesthetic assaults on the viewing experience. The aspect ratio is 1:1, an unusual square format which seems to box the characters in. Even more jarringly, some scenes—like the one in which a Facebook page fills the screen—give the impression of the image being violently cropped. From time to time, the frame freezes without warning. The slap is repeated thrice in quick succession, each time with a little pause. These can be seen as Behl’s efforts to unsettle, to jerk the audience out of its comfort zone to better appreciate the discomfort his characters are in.

“A short, at its best, can be like a haiku," Behl told La Brasserie Du Court, the blog of the International Short Film Festival, in February, adding a little haiku of his own: “It holds order, and within the order juxtaposition, and further within it is chaos." If you extend this to Titli, it could be an apt description of Behl’s cinematic style: tightly constructed, emotionally unruly, an ordered chaos.

This piece appeared in Mint Lounge.
Posted by a fan apart at 12:53 AM