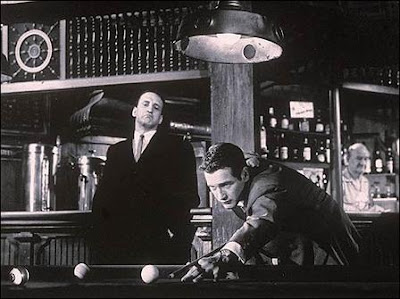 The Hustler is a great movie, but it could also be a great song. It’s easy to envision it as a slow-burning torch song or a smoky jazz number. Like ‘My Funny Valentine’, like ‘Flamenco Sketches’, it takes its time to unwind, passing by moments of triumph and defeat, childlike exultation and abject despair, and treating them all the same. It has the same quality which Lester Bangs identified in Patti Smith’s debut album ‘Horses’ – “…in its ultimate moments (it) touches deep wellsprings of emotion that extremely few artists are capable of reaching…with the most incandescent flights and stillnesses”. Like any great work of art, it has generated a steady stream of legends and myths and unanswered questions over the years. What if Frank Sinatra had successfully landed the role of ‘Fast Eddie’ Felson instead of Paul Newman? Did Jackie Gleason actually make all his own shots? Would this movie have been ‘re-discovered’ if Scorcese hadn’t continued the story in The Colour of Money? And was Paul Newman’s Oscar for reprising his role an attempt to make up for not giving him the statue for the original?

One of the fallacies of film criticism is expecting movies made in a certain era and corresponding to a certain set of existing values, to ‘hold up’. Arbitrary at best, this method sidelines regard for the prevailing levels of technical advancement and craft, as well the cultural climate of the time. Easy Rider may be over-cooked and simplistic, but the fact that it doesn’t hold up should not be the reason it gets criticized. The movies that do hold up often do so by chance, a random match between the vision exhibited and its resonance with society’s current state. The Hustler is one of those happy coincidences. Modern audiences find themselves relating to the spare dialogue, the sleaziness of George Scott’s performance, and the unflinching tragedy of the Piper Laurie’s character. And Paul Newman, a great-looking rebel from the golden age of great-looking rebels (and always slightly underrated as an actor, despite his 7 Oscar noms) gives the performance of a lifetime. Eddie is no happy trickster - he suffers for his art (his thumbs are broken after a hustle goes wrong), he picks up a woman, unexpectedly falls in love, but is ultimately too shallow to see how far out on the edge she is. By the time he realises it’s too late, and Newman’s rage at this juncture, simultaneously inward and outward directed, is wonderful to watch. Equal parts method acting, reticence and charm, it’s a fascinating and memorable lead turn.

An interesting parallel to Fast Eddie’s story is that of the director himself, Robert Rossen. Having joined the Communist Party, he refused to testify against his fellow members during McCarthy’s infamous witch-hunts. As a result he was blacklisted by Hollywood studios for two years. Finally he caved in and testified. He later claimed that he couldn’t stand not being able to work. Eddie also pays a heavy price for that which he considers to be his art, and his win over Minnesota Fats in the end is tainted by the knowledge of all he has lost in the process. How much did Rossen lose when he ratted on his friends? Did being at the helm of a genuine classic of American cinema make it somehow worthwhile? Like this enigmatic movie which poses more questions than it is willing to provide answers to, this is something that we may never know.
Posted by a fan apart at 2:18 AM 6 comments: