'In memory of': The Supersonics rev up

When 'In Memory Of' hit the shelves last year, as part of the Kolkata leg of Saregama's Underground Series, it genrated a buzz that stretched from the Hooghly to Haridwar. What was striking was what it was not - it was not derivative, or naive, or amateur - remarkable for a punk band's first single. There were no metal cliches, no lyrics straight out of Philosophy Hons, no accented vocals. Instead, you got -

- a no-nonsense punk riff, which changes into something resembling a Lee Renaldo- Thurston Moore churn

- a sound that lands somewhere between Sonic Youth, The Strokes and The Cure

They have a video out (though one has to admit, it's kinda square). They've been together three years, performed across the country, and, according to last month's Rolling Stone, are now in the studio, recording their debut album. If it's as good as the single (and I have a feeling it will be), I promise to be the first in line. 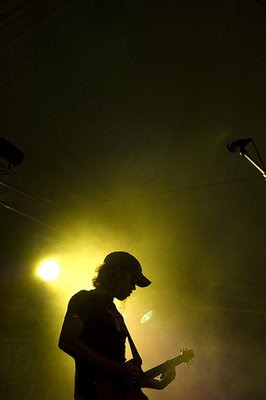 Sinuous slide work from one of its most famous exponents, Ry Cooder

Has there ever been a smoother guitarist than Mark Knopfler? (Answer rhymes with archipelago)

Solo that manages to be both wild and brainy

Jeff Beck, always at home with vaguely Eastern-sounding drones, propels the most jolting start in rock history. It sounds like a genie escaping the bottle.

Sickening loud lurches, topped by a snowstorm of fuzz. Only in rock music, could that be a good thing...

Grungy rhythm guitar and, out of nowhere, a ridiculously savage solo by McCartney

Dickey Betts and Duane Allman duel it out, until Duane points his slide skyward and leaves everyone behind

Noises you never thought a guitar could make

Jorma Kaukonen was the underrated lead guitarist of the ‘60s. This track is propelled by his alternately punky and lyrical playing

Jimmy Page this time, playing an acoustic guitar, plucking the opening notes like a dentist yanking out teeth.

Let’s face it. If mewling vocals were enough, Blind Melon would have had a lot more hits. The plangent, economical lead guitar is the real reason this song clicked. 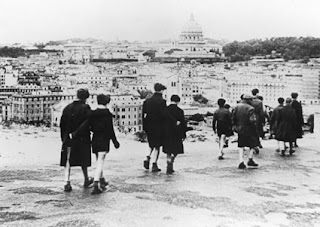 Before there was nouvelle vouge, independent cinema and Dogme 95 there was neorealism. Before Pasolini, Pontecorvo, Costa Gravas, there was Rosselini. Before Harvey Kietel there was Marcello Pagliero. And long before ‘The Battle of Algiers’ took us deep into the dark beating heart of guerilla warfare, there was a film that not only captured the same spirit, but also combined it with the humanity and tenderness of ‘Casablanca’. That film was ‘, Open City’.

Filmed by Rosselini on the devastated streets of , weeks after the Allies had liberated the city, the film serves both as historical document and history lesson. Countless World War movies have arrived since, and modern audiences may be left wondering what all the fuss is about. But as with any enduring work of art, one eventually starts to see past the outer form and down to the ideas at its core. Once that happens, it becomes easier to appreciate the risks which Rosselini takes. He abruptly kills off his heroine, the legendary Anna Magnani, half-way through the film. He creates what appears to be closet-lesbian subplot involving a stunning Italian informer and a German officer. Children throw bombs. Old men get hit with frying pans. Heroes die, insisting that they are not heroes at all.

One scene in particular haunts me. The children start whistling a Resistance tune as the priest, played by a stoic Aldo Fabrizzi, is strapped to a chair in front of the firing squad. Is the firing squad too scared to hit him the first time around, or is there a deeper meaning behind the bullets missing him? Rosselini plants the thought, but gives us no time to think about it. The bullet in his head is delivered by a German officer who was earlier shown drunkenly questioning the sanctity of the idea of a master race. Just like the film stock used - black, white and a little grey... Then why does it feel like a sell-out?
Posted by a fan apart at 10:55 PM No comments: 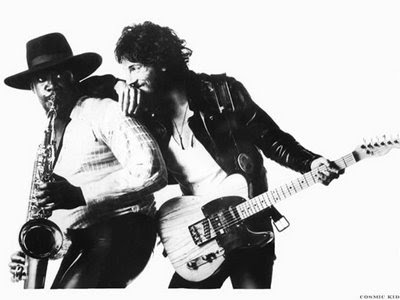 It’s true what they say. I spend most of my waking hours listening to music. A lot of very different music (the last five CDs I bought were The Raconteurs, Nas, Jefferson Airplane, The Velvet Underground and M.I.A). I see no reason why one can’t listen to Badmotofinger and follow that up with Blind Faith. I have sane theories and some not-so-sane ones (Doesn’t Cornell sound a lot like Steve Winwood? No? Listen to them again). And like any collector, I'm a sucker for ranking and re-ranking my collection, using a set of parameters too personal and logically warped to make sense to anyone else. Two basic questions, though, keep recurring – ‘Does it rock?’ and ‘Does it have soul?’ Not many albums manage to score high on both scales. 'Born to Run' is a glorious exception.

For those whose memories of Bruce Springsteen start with his era of arena-dominance in the ‘80s, it is important to remember that in 1975 Springsteen was not on the fast road to stardom. Sure, he had a kicking band, and their live shows sold out months in advance, and he was being called the 'Street Dylan', but he also had two releases which had not done well commercially. This was not surprising. Anyone Springsteen fan knows that Greetings from Asbury Park, N.J, and its follow-up, The Wild, The Innocent and the E-Street Shuffle were unwieldy, bursting at the seams, too smart for their own good...and unquestionably brilliant. Springsteen had so many one-liners and smart-ass comebacks and tragic tales in his head that the sentences would go on and on. The music was a crazy mixture of rock ‘n roll, bop, soul, folk, latin jazz, ‘60s girl groups and spoken word. It sounded like five separate radio stations tuning in and out of the same song. Everyone agreed that he was brilliant, but would he please make a song that they could put on the goddamn radio?

He made a whole album. As soon as 'Thunder Road' starts one notices two things. First, Bruce has started to economize on words with dazzling effect. ‘The screen door slams/ Mary's dress waves/ Like a vision she dances across the porch/ As the radio plays’ – four of the most evocative lines ever to kick off an rock album. One also notices the voice, because even though it is recognizable as Springsteen's it reminds us of someone else. On his earlier albums, Springsteen sang in a voice alternately muffled and raucous. You could hear traces of Dylan, some Sam Cooke, and a lot of Van Morrison in it. On 'Thunder Road', you can clearly trace the clear rockabilly-ballad croon that Bruce adopts back to its root, which is the otherworldly wail of Roy Orbison. Other premises are set up in the first song – this album will be about love, salvation, danger, ambition, youth and its discontents, and, linking it all, the road. The narrator seems to know how dangerous it can be, but he also realizes that it represents escape, and freedom in the truest sense. So, even though it is ‘Lying out there like a killer in the sun’, he still ends with the rebel yell of ‘It's a town full of losers, I'm pulling out of here to win’.

'Tenth-Avenue Freeze Out' creates atmosphere without entering the dark soul of the subject – gang wars on the mean streets. It sounds like it has been scripted by the hack poets one encounters later in 'Jungleland'. Unlike the other songs on the album, no tough choices need to be made in this. Instead, the narrator can afford to stand back and watch 'Scooter and The Big Man...tear the city in half’. No such luck for the characters in ‘Backstreets’. Stately music, ornate yet touching, sets the scene and keeps building until Springsteen can stand it no more and explodes into a heart-stopping roar that cannot possibly be mistaken to be anyone but him. Like so many of the vocal or instrumental passages in these songs, the emotion arives a few key seconds before the words - in this case, the full extent of horror and the depth of loss. The Bo Diddley beat and circus organ of ‘She’s the One’ brings the tension down somewhat, but by now we know the streets well enough to realize that the discord will always be there, bubbling below the surface.

‘Born to Run’, with that famous guitar intro which sounds like freedom, and Max Weinberg’s drumming, and whipcrack solos by Clarence Clemmons and Springsteen, is the most radio-ready of all the songs on the album. The words speed past you like cars on the highway, windows rolled down, making crazy turns. There really is nothing much one can say to describe it; it is more or less its own four-minute world. ‘The Night’ reminds me of American Graffiti by Francis Ford Coppola, with teenagers in the ‘50s on the take and on the make. Springsteen has never sounded more like Orbison than on this track, and one would have to look a considerable amount before one found a line more quintessentially Bruce than ‘She’s so pretty that you’re lost in the stars/ As you jockey your way through the cars’.

‘Meeting across the river’ is when everything starts to unravel. It also provides a vital bridge between the intimate portraits of lovers in the earlier songs and the panorama of the final track. Over aching piano and a bass that sounds like a heartbeat, the narrator convinces, wheedles and woos his girl. He needs to make a delivery to ‘the man on the other side’, and somehow we know its all going to go wrong. The music turns elegiac, a French horn gives two blasts that pierce the soul and stay embedded there, and suddenly, we’re in ‘Jungleland’.

The music that starts out the final track is still elegiac, but then a piano run begins, every bit as timeless as the guitar figure in ‘Born to Run’. Springsteen builds the story better than any he has done before. Its like a camera starting out in a character's eye, and panning out until you can see them whole, and then the street, and then the whole town. Metaphors fall like meteors – ‘Kids flash guitars just like switchblades/ Hustle for the record machine/ The hungry and the hunted/ Explode into rock ‘n roll bands/ Face off against each other out in the street/ Down in Jungleland’. There are huge crashing guitar chords after every chorus that sound like all the glory rock music will ever achieve, and a brief incendiary solo, with Clemons and Springsteen both blasting off at the same time. This is soon followed by a longer solo by Clemons and by the time it works itself out we know that someone is dead, even before the words arrive to confirm our fears. It almost ends there, but then something strange happens. The music, which has slowed almost to a stop, suddenly races out again, aiming for the sky one last time. Springsteen’s astonishing wordless vocal does the same, expressing all the passion and desperation, fear and release that this album has been witness to. It makes perfect sense, and in retrospect, it's probably the only ending which could have.
Posted by a fan apart at 7:38 AM No comments:

Flight of the Conchords

And of course they get the award for most inventive response to a diss in the folk-gangsta rap genre:
"Why why why why (be more constructive with your feedback)"
Posted by a fan apart at 11:09 PM No comments: