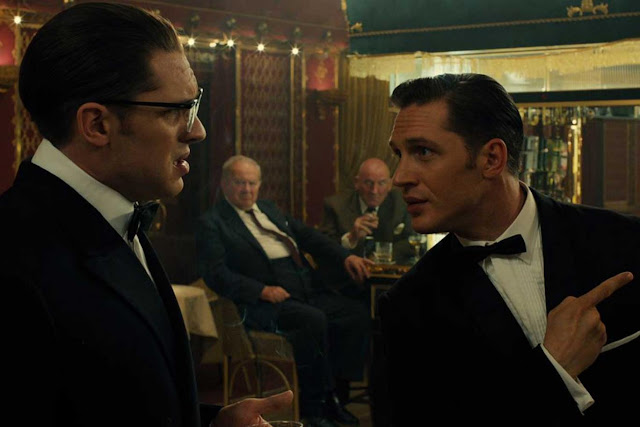 In the 1950s and 1960s, the London crime scene was ruled by the Kray twins. As Eastenders who ended up rubbing shoulders with Judy Garland and Joe Louis but were also convicted of murder, Ronnie and Reggie Kray have held their own fascination for film-makers over the years. James Fox met Ronnie Kray while preparing to play a gangster in Donald Cammell and Nicolas Roeg’s 1970 classic Performance. In 1990, there was The Krays, starring two members of the band Spandau Ballet, a film that must have inspired its own unique terror. Now comes the studio version, directed by Brian Helgeland and starring Tom Hardy as both the bespectacled, awkward Ronnie and the smoother Reggie.

Helgeland has written one of the best cops-and-wise-guys movies of the past 20 years in LA Confidential. He also adapted Mystic River, a more sobering look at the effects of gang violence. Legend—his fifth film as director—operates largely in Goodfellas mode: a glamorous gang tale with a voice-over and a period pop soundtrack. Ronnie, with his neurosis and hair-trigger temper, is Joe Pesci, while the suave Reggie is De Niro. There’s even a variation on the Copacabana one-take when Reggie takes his girlfriend, Frances (Emily Browning), to a club, gets interrupted, doles out a beating and returns to his table.

The film follows the twins as they finesse (mostly Reggie) and bludgeon (both) their way across London’s crime scene and into society’s upper echelons just as the cultural explosion of the 1960s is starting to take off. While it does tempt us to think of Reggie as “good” and Ronnie as “bad”, the film never really stops reminding us that both brothers are ruthless; Reggie is simply able to hide his brutality better. Though Helgeland’s writing is frequently funny and the period detail immersive, the film suffers for lack of someone to root for. The only sympathetic character is Frances, who—in an uncharacteristic move—is entrusted the voice-over.

The foregrounding of Frances and Reggie’s relationship is the closest that Helgeland comes to putting his own spin on the gangster movie. But we never get any real perspective from Frances, just the sad realization that her faith in Reggie’s essential good nature was misplaced. Hardy, to his credit, doesn’t try to elicit more sympathy from the audience than his characters deserve. His openly homosexual Reggie—ugly of speech and countenance—is a more interesting creation than Ronnie, though I more enjoyed the work done on the sidelines by David Thewlis (as the Krays’ accountant) and Christopher Eccleston (as the cop chasing them). In the end, Legend is violent, polished, darkly funny—and empty.

This review appeared in Mint.
Posted by a fan apart at 10:13 PM