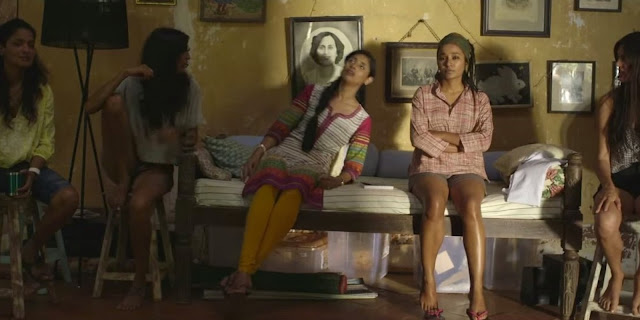 Angry Indian Goddesses has no intention of letting the audience ease into the film. Ten minutes in, Pammy (Pavleen Gujral) has dropped her gym weights on an eve teaser’s foot; photographer Frieda (Sarah-Jane Dias) has quit a fairness cream shoot; singer Mad (Anushka Manchanda) has attacked hecklers at a show; company head Su (Sandhya Mridul) has chewed out her employees at a meeting; Jo (Amrit Maghera) has spectacularly failed at being a damsel in distress; and Lakshmi (Rajshri Deshpande) has a man, quite literally, by the balls—all this while "In the Hall of the Mountain King" builds to a crescendo in the background. Then, accompanied by the supremely aggressive strains of Bhanvari Devi hollering "Kattey", we crash into the opening credits.

When the film resumes, we’re in Goa. All the women are friends of Frieda’s, who’s invited them over to her house so she can make an announcement. After some prodding, she reveals that she’s getting married, though she’d oddly reluctant to reveal the identity of the groom.

After an opening that operatic, one might have expected things to calm down. But this isn’t that kind of film. Part of Angry Indian Goddesses’ charm (and perhaps its undoing) is its almost unceasing energy. Director Pan Nalin (Samsara, Faith Connections) keeps the screen buzzing with overlapping dialogue and loudly voiced opinions, jumpy camerawork and even jumpier editing. Secrets keep spilling out: Mad has attempted suicide; Pammy is in an unhappy marriage. My favourite might be Su’s unfortunate reaction to the arrival of another of Frieda’s friends, Nargis (Tannishtha Chatterjee). It turns out she’s an activist protesting Su’s company’s land acquisition plans.

At times, it’s all a bit much. Forcing Nargis and her ideological opposite to live under the same roof is contrived enough, but having Su’s child bring them together is just too sentimental. The scenes with Jo daydreaming about the shirtless car-washer next door seem like a cross between a condom ad and a bad Terrence Malick imitation. The hugs-per-scene ratio is dangerously high. There’s an unfortunate tendency to lecture the audience on everything from land-grabbing to Section 377. And though it’s perfectly fine to want to keep the film free of men, it makes little sense to have Mad’s boyfriend travel 600 km to see if she’s all right and shunt him out of the story immediately after.

It’s difficult to predict what the audience will make of the events of the last 20 minutes. One can argue that something of this nature has been simmering through the whole film. While this is true, I feel the film would have been just as hard-hitting – and a bit more convincing—if it had kept its characters’ problems life-size. Then again, it’s tough to imagine a film like this not going out with an especially loud bang.

Had the ensemble been flat or awkward or unconvincing with each other, Angry Indian Goddesses would have fallen flat. But the performers, many of them only a film or two old, are all visibly comfortable in their skin and with one another. Dias is beautifully poised as the quiet Frieda; Gujral, playing the Punjabi ditz, is very funny; and Deshpande shoots off sparks as the house help Lakshmi. The film juggles the characters around, pairs them up in different scenes, and though not all the combinations work, we do get a sense of what they’re like as individuals.

Angry Indian Goddesses has been promoted as India’s first female buddy film, and its best moments are the ones with the six women sitting around, cussing (there’s a lot of that – muted at random by the censors), getting drunk, and talking about everything that comes into their minds, with Lakshmi hovering somewhere in the background. When’s the last time you saw a female character in a Hindi film have a wet dream, or come out to her friends? If the answer is ‘never’, Angry Indian Goddesses might make for instructive viewing.

This review appeared in Mint.
Posted by a fan apart at 10:06 PM