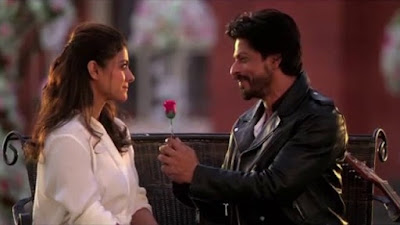 There are stupid films, and there are films that flaunt their stupidity. Rohit Shetty is a frequent purveyor of the latter sort. Such films nearly always have dialogue attributed to Farhad-Sajid. And, of late, they sometimes feature Shah Rukh Khan. Dilwale brings all of them together. It must have taken some doing, but they’ve managed to ensure that the sum is worse than the parts.

Khan plays Raj (not that Raj), owner of a garage in Goa, loving older brother to Veer (Varun Dhawan), and a seemingly well-adjusted guy, give or take memories of being shot in the chest at close range. Yet, when he dresses up like ET, closes the door behind him and doles out a beating to some local thugs like Amitabh Bachchan in Deewar, we realize that this is no ordinary mechanic. In the extended flashback that follows soon after, we learn that he used to be a mafia strongman named Kali, and that he was once in love with a sketch artist called Meera (Kajol)—though why a film this unsubtle would refrain from naming her Simran is beyond me.

This flashback is probably the most watchable part of the film. The sight of Khan and Kajol walking around in a European town—and the sheer history that crackles when they’re on screen together—neutralizes the banal lines and stock situations they’re given. The one scenario that’s novel has been lifted from How I Met Your Mother: Raj taking Meera on a 5-minute date. Still, it at least feels like Shetty and screenwriter Yunus Sajawal have expended some effort in conceptualizing this and executing it as a one-take. Which is way more than you can say for the rest of the film.

(Spoilers ahead.) The big twist—which you can see looming at least 15 minutes before it arrives—is that the crime syndicate Kali’s family is battling is headed by Malik (Kabir Bedi), whose daughter is… Meera. It turns out that she’s a criminal as well, and that it was she who shot Raj 15 years ago. Why does that matter now? Well, Veer is in love with Ishita (Kriti Sanon), who may or may not be related to you know who. Imagine finding yourself living in the same town as an old lover who shot you and discovering your brother is in love with her sister. Of all the exceedingly specific gin joints…

Shetty is the Michael Bay of Indian cinema, attracted to fast cars, gleaming surfaces and crude humour. Does he ever have moments of doubt that aren’t related to box-office collections? Does he sometimes feel that his action sequences lack coherence—that they’re just a collection of fast cuts and flying bodies that leave the viewer bewildered as to the spatial geometry of the scene? Does he worry that his comedy tracks seem like they should be accompanied by a sign that says “comedy track, please laugh”? If he does, these doubts must be fleeting. When five of your films have grossed over Rs 100 crore, there’s no real reason to fret about craft.

And yet, and yet. I watched the film this morning, an 8.15 show on a workday. The hall was packed. Everyone seemed to be enjoying themselves. They laughed when Sanjay Mishra said things like “Bahut kaam hai, total Haldiram hai”. They cheered each time Khan did a slow walk towards the camera. They really seemed to like it when Varun Sharma, playing Veer’s friend, blamed his girlfriend for his financial troubles. Perhaps we get the kind of cinema we deserve.

This review appeared in Mint.
Posted by a fan apart at 3:13 AM