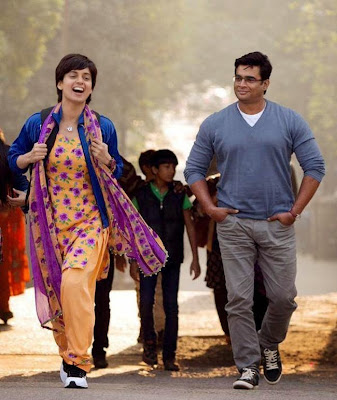 Anand L. Rai’s Tanu Weds Manu wasn’t a great film, but it did introduce audiences to a Kangana Ranaut who seemed comfortable in her own skin instead of neurotic or doomed in love. Three years later, Queen improved on this template in every way. This left Rai with a problem for his sequel: Kangana was India’s sweetheart now, but Tanu wasn’t a very likeable character. The solution he offers is pure Bollywood in both its simplicity and its faith in the audience’s willingness to be deluded. By introducing a new character who looks exactly like Tanu, but is nice, he ensures that the audience gets both Tanu and Kangana.

The film opens with Tanu (Ranaut) and Manu (R Madhavan) getting married, which is where the earlier film had left us. Barely have the opening credits finished, that we’re four years in the future, in England, with their marriage on the rocks. In a scene so bizarre that I thought it was a dream sequence, the two of them have some sort of couples therapy session with a team of doctors in a mental institution. Manu gets worked up and is dragged away and committed; Tanu returns to her home in Kanpur.

I’d barely recovered from that scene when Manu, now back in Delhi, sights a much younger, short-haired, Haryanvi-accented version of Tanu called Kusum and, without as much as a thought for what Freud might say about his inclinations, promptly falls for her. Tanu, meanwhile, renews her acquaintance with Raja Awasthi (Jimmy Shergill), her tempestuous suitor from the previous film. So far, so much suspension of disbelief, but when Manu finds out that Raja is betrothed to Kusum, I gave up on anything making the slightest sense and settled back to see if I could enjoy myself.

Surprisingly, I could. It was nice to see everyone from the first film: Rajendra Gupta as Tanu’s harried father; Swara Bhaskar as her friend, Payal; Deepak Dobriyal as Manu’s friend, Pappi. Shergill, whose brides the unassuming Madhavan keeps stealing, lands his sighs and rueful wisecracks with remarkable comic timing. And Rai makes sure that things keep getting crazier and crazier. After a sequence of events that would be difficult to reconstruct if I wanted to, Manu and Pappi find themselves about to be burnt alive. Five minutes later, they’re dancing with their would-be murderers to “Banno Tera Swagger Laage Sexy”. Only in a Hindi movie.

Even if you don’t care about all the implausibility, there are a couple of blind spots. Rai cannot seem to shake his conviction that, when done by the right people, stalking is the same thing as courting (at least it isn’t as blatant as his last film Raanjhanaa, which raised stalking to an art form). The subplot involving Pappi and the girl he loves is just an excuse to bring Payal into the story, while the character of the creepy tenant who falls for Tanu exists mainly as a showcase for the talented Mohammed Zeeshan Ayyub, who deserves bigger and better. Also, given the unpredictability of all that’s come before, the ending is pretty much what you expect it’ll be.

The Kusum/Tanu gambit may be far-fetched but it does allow Ranaut to demonstrate what a confident actress she’s become. Her Kusum could have been a purely comic creation, but Ranaut doesn’t push the accent more than she has to, relying instead on the straight-talking sweetness of the character to shine through. And as Tanu, she starts off brittle and mean and ends up in full Meena Kumari mode, walking drunk through the streets at night with "Ja Ja Ja Ja Bewafa" (from the 1954 film Aar Paar) playing on the soundtrack. She’s the reason audiences will flock to see Tanu Weds Manu: Returns. She’s also the main reason the film is—even at its silliest—watchable throughout.

This review appeared in Mint.
Posted by a fan apart at 10:51 PM