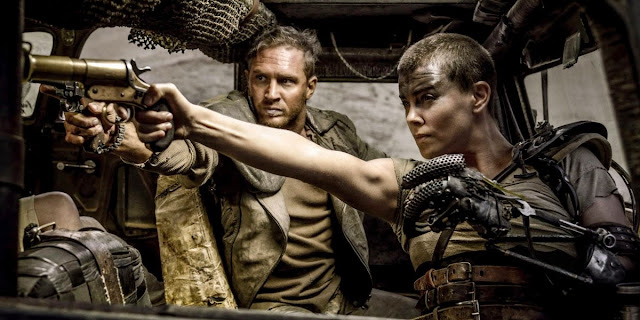 Four years ago, it was announced that George Miller would be directing a new Mad Max movie with Tom Hardy in the lead. The Australian director had been trying to revive the franchise since 1998, first with Mel Gibson, star of the first three movies, then with Heath Ledger. Many must have thought Miller foolish to persevere, especially since he hadn’t made an action movie in years (his most recent ventures were Babe: Pig In The City, Happy Feet and its sequel). Several of them presumably told him to quit. Thank God he didn’t.

At 70, Miller has directed the most spectacular action movie of the last few years. Mad Max: Fury Road is a visceral jolt to the senses. One need only compare its pounding action scenes to the staid combat in the recent Avengers sequel to see how a skilled director can bring grandeur and imagination to blockbuster moviemaking. The first extended action sequence in Fury Road starts about 30 minutes in and seems to go on forever. But unlike most recent Hollywood action movies, you actually want it to keep going. It’s one of those rare moments when the pulpiest of material is transformed into a euphoric wave that washes over the audience, sweeping them from crescendo to crescendo.

At the start of the film, Max, a road warrior in a post-apocalyptic Australian wasteland, is captured by the War Boys, an army of “half-dead” who subsist on human blood transfusions. Though he is kept chained up, Max is offered a small window of hope when the evil leader Immortan Joe sends his War Boys out to rescue a “War Rig” gone rogue. One War Boy, Nux (Nicholas Hoult), straps Max to the front of his vehicle so he can keep on receiving blood.

The War Rig in question is being commandeered by Furiosa (Charlize Theron). She has spirited away Immortan’s five wives—breeders, as he calls them—who are fleeing because they cannot bear to be treated as commodities and don’t want their babies to grow up to be crazy warlords. The War Boys catch up and attack, but Furiosa, a warrior as fearsome as Max, manages to fend them off. After the dust has quite literally settled, Max sets himself free and, after some initial hiccups, agrees to help the women reach their destination, a fabled Green Place.

Among the many crazy stories associated with this film’s production, my favourite is how Eve Ensler, author of The Vagina Monologues, ended up a consultant on the film, providing Miller information on the treatment of women in war zones. In an interview to Time, she described Fury Road as a “feminist action film”. Incredible as this may sound, it’s true. Not only does Theron kick as much ass as Hardy, she is the emotional centre of the film. The film’s sexual politics may be simplistic, but for a genre that caters almost exclusively to male teenagers, it is a refreshing change.

During one action sequence, Max is aiming at an incoming enemy vehicle. He fires and misses. He aims, reconsiders, and hands the gun over to Furiosa. She rests it on his shoulder, shoots and hits the target. Fury Road has been getting some heat from (male) commentators who feel that Max has been made a supporting character in his own film, but this is my favourite moment: when the balance of power gracefully shifts from the person whose name is in the title to the person best qualified for the job.

This review appeared in Mint.
Posted by a fan apart at 12:36 AM