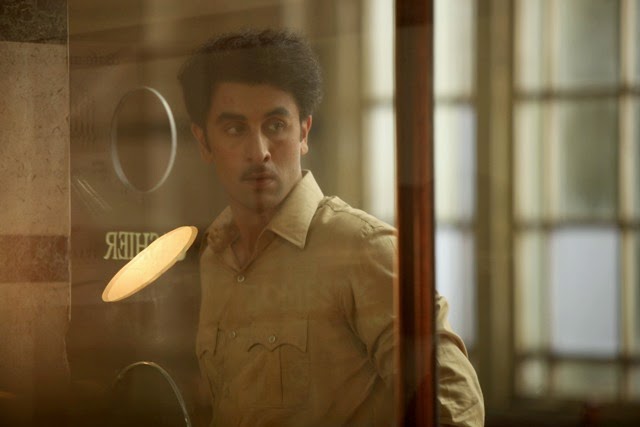 Did Bombay actually look like a Warner Bros gangster flick in the 1960s? Did police inspectors wear fedoras then? Did movies like The Roaring Twenties, released in 1939, play in theatres? Did young toughs dream of dying like James Cagney, in the arms of a girl calling them a big shot?

They probably didn’t, but it doesn’t matter. This is what the Bombay of Bombay Velvet looks like. It’s the fond dream of someone who wishes the city was, at some time, this cool, this dangerous, and this much like a movie. To fault Anurag Kashyap for historical inaccuracy would be pointless. This is moviemaking as wish fulfilment. To those who argue that Tommy Guns were never fired in these streets, the film says, “Yes, but wouldn’t it be fun if they had been?” This is ostensibly the story of Johnny Balraj, but the only narrative that’s relevant after a while is Anurag Kashyap’s quest to make the ultimate gangster movie.

Bombay Velvet hits the ground running, setting about half-a-dozen subplots in motion in the first 30 minutes. At halftime I was still untangling them, but the gist is this: Johnny Balraj (Ranbir Kapoor), a bare knuckle boxer with little refinement and loads of hotheadedness, wants to be a big shot. He falls in with a crooked businessman called Kaizad Khambata (Karan Johar) and becomes his muscle. Soon, he’s helping him with his problems with the mill unions and the newspaper editor behind them, Jimmy Mistry (Manish Choudhary), as well as running an uptown club called Bombay Velvet. His life is further complicated by the arrival of jazz singer Rosie Noronha (Anushka Sharma), sent to him by Jimmy, whose mistress she is, to retrieve damaging photo negatives.

There’s a lot more by way of plot—I haven’t even gotten to Kay Kay Menon’s police inspector or Satyadeep Misra as Chimman, Johnny’s childhood friend—but Kashyap keeps things rattling along at a very lively pace (the editing is by Prerna Saigal and Scorsese’s long-time collaborator Thelma Schoonmaker). You almost wish he’d slow down a bit and let you take in the scenery. One of the few times this happens is when Khambata excuses himself during a meeting with Johnny, goes outside and laughs uncontrollably. It’s a throwaway moment, beautifully played by Johar, and such a welcome change of pace that the movie seems to come alive after it. If only Kashyap had developed this character more: a gay, upper-class Parsi with mafia connections and a possible crush on a fair-skinned street brawler. Instead, we’re stuck with Johnny.

Johnny Balraj isn’t nearly as charismatic as the film makes him out to be. He’s scrappy and ambitious but not particularly bright—anyone who comes up with the sort of twin sister ruse he does has no future as a gang boss. He’s prone to sudden bursts of rage but Kapoor—an uncharacteristic bit of matinee idol casting by Kashyap—isn’t convincingly intimidating. Why he speaks tapori-style, like Aamir Khan in Rangeela, when his friend doesn’t, is never explained. Johnny is far less interesting than the characters he is supposed to remind us of: Cagney in The Roaring Twenties and The Public Enemy and White Heat; Johnny Boy in Mean Streets, a force of nature who doesn’t know when to quit; Vijay Verma in Deewar, consumed by the idea of being rich and powerful.

Bombay Velvet could also have done with sharper writing (Vasan Bala, Thani, Kashyap and Gyan Prakash share credit). The plotting is dense but owes a large debt (acknowledged by Kashyap) to James Ellroy and his LA Quartet of novels. The agitations by mill unions in the 1970s are alluded to but not explored in depth, almost as if the writers were afraid that too many historical details might puncture the film’s dream bubble. The ending is a disaster. The dialogue is serviceable, but pales in comparison to Gangs of Wasseypur, one of the most quotable Hindi films of the last decade. “Abhi toh apan small se large hua hai... abhi Patiala hona baki hai” is the kind of line you expect in a Rohit Shetty film, not an Anurag Kashyap one.

Even with all its flaws, Bombay Velvet has style to spare. It has been been shot, like most of Kashyap’s films, by Rajeev Ravi, just the person you want photographing gangsters and shadows. The period design is painstaking, with old Bombay recreated in Sri Lanka. Amit Trivedi’s music pays intelligent tribute to the big band singers and jazz musicians who played in Bombay clubs at the time. And there are some nice little touches, like the use of a stand-up comic as a one-man Greek chorus, or the elevation of Geeta Dutt over Asha and Lata, always the mark of a connoisseur.

Bombay Velvet is frustrating and exhilarating in equal measure. Though his ambition is plain to see, I prefer the Kashyap who delivers the shock of the new rather than the glamour of old.

This review appeared in Mint.
Posted by a fan apart at 11:18 PM