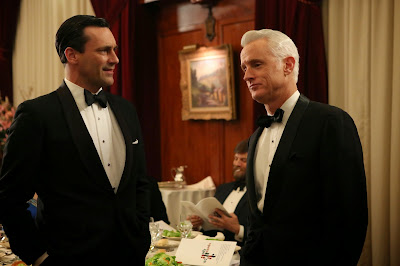 After eight years and seven seasons, the last Mad Men episode goes on air this Sunday. If the thought of the series ending sends you into an inconsolable tailspin, know that you’re not alone. Even with AMC cutting the final season in half, the end is finally here, and millions of people will probably be wiping their eyes (or, if it’s like The Sopranos finale, scratching their heads) come Sunday night. And though it’ll leave a hole that no amount of binge watching or martini drinking will likely fill, it’s heartening that this show about a New York ad firm and its mercurial creative head, Don Draper, is going out as strong as it is. We offer our own tribute with this list of defining pitches from the show’s incredible run.

Lucky Strike: First Time Around
In the first episode, pitching to a Lucky Strike team rattled by a Federal Trade Commission ruling that forbids tobacco companies from advertising that cigarettes are safe, Don Draper seems to lose his train of thought. Pete Campbell jumps in but makes little headway, and the clients are almost out of the door when, for the first time, we see Don pull an idea out of mid-air. He asks the owner how his cigarettes are made and stops him when he hears the magic word: toasted. One of the clients protests that their competitors make cigarettes the same way. “No,” Don says, “everybody else’s tobacco is poisonous. Lucky Strike’s is toasted.”

Kodak: The Benchmark
While it was clear that Don Draper was an uncommonly good pitchman, clinching evidence arrived in the first season’s last episode, “The Wheel”. The pitch is for the Kodak slide projector, which the company is calling ‘the wheel’. Don has a more evocative moniker in mind – the carousel. “It lets us travel the way a child travels,” he says, a transported look on his face. “Around and around and back home again to a place where we know we are loved.” The slides in the projector are of Don and his family; it’s the first of many times the series will link a pitch to a character’s personal life. The pitch is so powerful that Weiner doesn’t bother to show us the executives’ decision: Duck Phillips simply wraps things up with “Good luck at your next meeting.” The scene set the standard for future pitches and marked Mad Men out as a show that had it in it to be an all-time great.

Belle Jolie: A Foot in the Door
Belle Jolie is a significant campaign because this is the first time the series introduces the idea of Peggy as a potential copywriter. Along with the other secretaries, she is included in an informal trail session for the lipstick brand. Afterwards, she remarks that the wastepaper bin full of smeared tissues looks like a “basket of kisses” and floats the idea that every woman wants a particular shade of lipstick she can call her own. These remarks make their way back to Don, who recognises their potential and asks Peggy to write some copy. Although Peggy is nowhere near the final presentation, it’s her ideas that Don sells. The meeting also shows how Don’s talent and arrogance allows him to bludgeon his way past reluctant clients. When the Belle Jolie execs demonstrate resistance to the idea, Don suggests that they end the meeting. “You’re a non-believer,” he tells him. In his mind, his clients are supplicants and he’s there to show them the light. It’s one of the many complexes the show will shatter in due course of time.

London Fog: Raincoats in the Closet
In the season 3 premiere, “Out of Town”, Don and Sterling Cooper’s art director Sal travel to Baltimore to meet raincoat manufacturers London Fog. There, Don discovers by accident what viewers of the show have long known: that Sal is gay. Next day, at the client’s, Don gives no indication that this is playing on his mind. On the flight back, however, he turns to Sal and asks him to answer something truthfully. Yet, instead of quizzing Sal about his double life (Don leads one himself), he pitches him a risqué idea for London Fog that ends with the words “Limit your exposure.” Sal nods, understanding the import of Don’s warning. Unfortunately, this will not be enough to save his job at the firm.

Hilton: What about the Moon?
Hilton might be the first time Don turns on his persuasive powers full blast and still can’t impress the client. Conrad Hilton and Don have been building up a personal rapport for a while; Don sees the hotelier as a sort of father figure and vice versa (Conrad actually tells him “You’re like a son”). The eventual campaign, which promises the thrill of exotic destinations with the comforts of home, seems to be a winner, but Conrad wants “Hilton on the moon”, something he’d mentioned in passing over the phone. Don hates losing, but his reception of Conrad’s criticism indicates a deeper, personal hurt. The older man’s statements – “I’m deeply disappointed”; “What do you want from me, love?” – too seem like they’re coming from a difficult-to-please father.

Hershey’s: Out of the Past
By the end of season 6, Don’s self-loathing and multiple inner demons have left him a shell of his former self. Presenting to Hershey’s, he seems to have pulled himself together, spinning a story about family, memory and chocolate as the “currency of affection”. It’s “carousel” all over again – until it isn’t. Having seemingly sealed the deal, Don decides, to his colleagues’ horror, to tell the Hershey execs about his childhood in a brothel and how one of the girls there gave him Hershey bars in exchange for picking pockets while her customers were occupied. This revelation not only loses the firm the account, it also costs Don his job and completes his fall from grace.

Burger Chef: Full Circle
With Don gone, Peggy is made creative head. He’s hired back eventually but has to work under his former protégé, leading to some understandable friction. But they soon patch up and when Don realises that it would mean a lot for Peggy’s career, he hands the Burger Chef pitch which he was supposed to close over to her. This is fitting, as this was Peggy’s campaign from the start. She nails it the same way Don would – taking her time, telling a story, using something in the public sphere (the moon landing) for added resonance. It’s the fitting culmination to her journey from secretary to consummate adwoman.

SC&P West: Old Dogs, Old Tricks
Arriving in episode 11 of the last season, Don’s last pitch (unless the final episode allows him another) is an act of desperation. Instead of a product, he’s pitching himself and his colleagues to McCann, who are planning to absorb Sterling Cooper & Partners. They ask for time with Jim Hobart, head of McCann, and Don tries to pitch ‘SC&P West’ as a division of the advertising giant, yet servicing its own clients out in California. Jim isn’t having any of it. Stopping Don in mid-flow, he tells his audience, “I don’t think you understand what’s happened. It’s done. You’ve passed the test.” And like that, SC&P is no more.
Posted by a fan apart at 1:11 AM