Once Upon A Time In Hollywood: Review 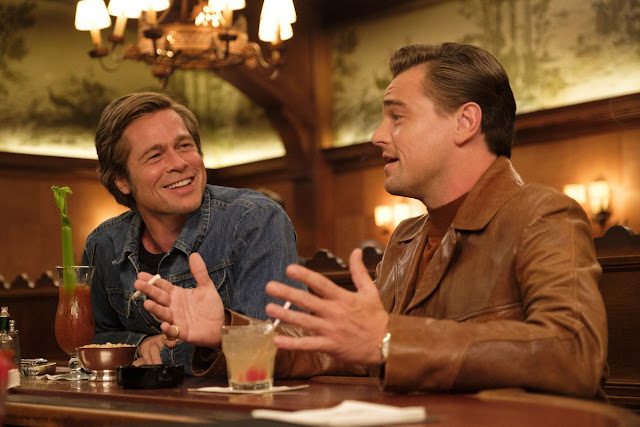 In an alternate Hollywood, in 1969, Bruce Lee gets his ass handed to him by a washed-up stunt double named Cliff Booth. Before you say that this would never have happened, consider that the last person this needs to be pointed out to is Quentin Tarantino, and that this is probably his nod to old TV Westerns where the good-looking lead had to win the fight against the trash-talking heavy, no matter how mismatched they seemed. This unlikely outcome is also Tarantino's film in microcosm, with Cliff’s friend, actor Rick Dalton, transitioning unhappily from the one handing out beatings to the one receiving them.

When he was the lead on a show called “Bounty Law", Rick was close to being a movie star: popular enough to be screen-tested for Steve McQueen’s part in The Great Escape, not adept enough to win it. He’s less in demand now, guesting on cop shows and fending off makers of spaghetti westerns trying to lure him to Italy – ‘60s Hollywood shorthand for a career on the rocks.

Rick is played by Leonardo DiCaprio, and it’s touching to see this supremely capable actor playing a largely incapable one. One long sequence is built around his guest turn as a cartoonish bandit on a TV Western. We’ve already seen him rehearse the tinny dialogue, and he nearly gets through all of it when a line trips him up. He tries to move on but gets it wrong again, and again. They start the scene over but now the machinery’s jammed. The panic attack that ensues when he’s alone in his trailer is both funny and scary, Rick’s self-hatred and naked fear at becoming obsolescent standing in for the imminent collapse of the studio system and the establishment’s mistrust of the crazy long-haired kids who’d shape the Hollywood of the ‘70s.

Cliff (Brad Pitt) isn’t worried about his career, probably because he never had much of one to begin with. He’s Rick’s stuntman, as well as his gofer, chauffeur and one-man entourage. He’s depended on Rick for so long that it’s become second nature, and instead of recognising that his meal ticket is nearly expired and doing something about it, he allows himself to be distracted by the frighteningly available Pussycat (Margaret Qualley) and her more straightforwardly frightening hippie friends. Rick, meanwhile, is excited by the arrival of Sharon Tate (Margot Robbie) and Roman Polanski next door; he might be one party away from working with the director of Rosemary’s Baby.

History tells us these two worlds will collide: the hippies on Spahn’s Ranch are the brainwashed children of Charles Manson, who’ll brutally murder Sharon and her friends on an August night in 1969. We also know Tarantino has denied history before, in Inglourious Basterds, where Hitler meets a fiery end at the hands of a Jewish projectionist. I won’t go into what he does here, but will just say that he finds a way to honour both Sharon Tate’s sunny spirit and the schism caused by Manson’s rampage.

Once Upon A Time In Hollywood treats late-‘60s Los Angeles like a giant movie set. Everyone and everything is deployed: Dean Martin, Joe Namath, Candy, the Georges – Peppard, Maharis and Chakiris, Sergio Corbucci, Joanna (“She’s top banana"). As with any Tarantino film, you don’t have to get the references, but they do make the experience richer. When Manson is introduced to Sharon as a friend of Dennis and Terry’s, you’re supposed to know that this refers to Dennis Wilson of The Beach Boys and producer Terry Melcher, and that this would have been enough to get Charlie into Hollywood circles.

The detailing extends beyond pop culture ephemera. Tarantino has always had an ability to create tactile worlds by highlighting the crackle of a cigarette, the hiss of a record player, the texture of a pastry. There’s an endless stream of such minute details in Once Upon A Time In Hollywood, making it both the most immersive and least streamlined thing he’s made. The space that’s usually occupied by plot or set-piece is replaced here by rambling conversations, trailers for movies that don’t exist, car rides scored to Neil Diamond and The Box Tops, flashbacks within flashbacks within flashbacks. It shares a lightly melancholic mood with PT Anderson’s Inherent Vice – another LA story – and with Tarantino’s own Jackie Brown.

There’s a brief, horrific spurt of violence – indicative, perhaps, of the way the Manson violence invaded Hollywood’s psyche. Yet, it’s not in step with the rest of this easygoing film. It feels like Tarantino showboating for his fans, giving them a chance to shake their heads and say “He’s still got it". You can tell it’s a stunt, because immediately after the film settles back into the wistful, warm tone it’s maintained throughout.

There’s an exceptional final shot, dread and mercy and hope brought together in a sweeping camera movement. But the most loving passage comes earlier, with Sharon Tate in a movie theatre, feet up on the seat in front, watching herself onscreen, waiting with each line for the reactions of the audience and delighting in them when they arrive. She’s as limited an actor as Rick, but in that moment it doesn’t matter. She’s a movie star. She’ll live forever.

This review appeared in Mint.
Posted by a fan apart at 3:40 AM