'I remember all the mistakes I’ve made. They’re like scars': Simon Taufel 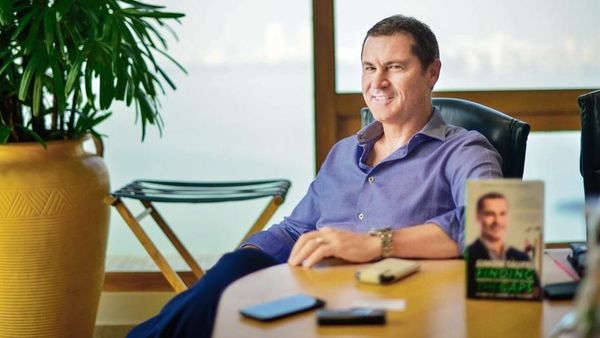 As a dispassionate deliverer of decisions on the cricket field, Simon Taufel was a familiar face on television screens in the 2000s. The Australian stood in his first One-Day International in 1999, and his first Test in 2000. He quickly developed a reputation for calm, accurate decision-making. He was named ICC Umpire of the Year five times in a row, between 2004 and 2008.

Since retiring from international cricket in 2012, Taufel has expanded his ambit to leadership training and development, using his experiences on the field to help businesses and institutions. He’s now written a book on the subject—part memoir, part self-help manual—called Finding The Gaps. In Mumbai to participate in the Tata Literature Live festival, Taufel spoke to Mint about the infamous 2019 World Cup final overthrow, how umpires practice, and why he doesn’t like to officiate when his children are playing.

In your book, you write about how you would feel the nerves on the morning of a Test, just like players.
Feeling nervous is actually a good thing, provided you’re able to control your nerves. I was always anxious about my performance. If you get over-anxious you tend to worry too much. But if you manage that well, those nerves help you to be on top of your game.

Was there a point you realized you were operating out of fear of making a mistake?
I’ll tell you how that manifests itself in the extreme, which produced my worst game of cricket (June 2004 at Trent Bridge, England playing New Zealand). When I started to make one or two mistakes early on, I started to beat myself up mentally, and then I was making more mistakes. I think I made six or seven.

I learnt a lot through that experience—that I need to keep things in perspective, focus more on the process, and be kinder to myself. If you can do that you’re likely not to make a second or third mistake. In my experience, players will forgive the odd mistake. But they won’t forgive two. And in the third umpire’s box—no mistakes.

Do players have a good memory for decisions that go against them?
Some do. It’s surprising how quickly players move on. My mistakes, I remember all of them. They’re like scars, all memories attached to emotion.

You said in an interview once that on the subcontinent, umpiring is seen in terms of decisions and mistakes, whereas in other countries it’s more about people-management.
There’s a very strong view on the subcontinent that decision-making is the be-all and end-all of officiating. In the West, there’s a slightly different take, which is that, to go from good to great, you need the soft skills.

One thing I learnt from (former umpire) David Shepherd is that you need good people skills and to be a good person. Because when your decision-making lets you down from time to time and you have none of the other skills, you’re gone. Preparation, attitude, coachability, resilience, leadership, humility and honesty, managing conflict—they’re the things that’ll give you sustainable success.

Did the crowd ever give you a hard time?
There are times when you walk off the field—at the SCG (Sydney Cricket Ground) or at Lord’s you have to walk through public areas—and there are uncomplimentary comments questioning your decisions. Sometimes they’re right, sometimes they’re not. You try not to engage. Just once at the SCG and maybe at the Wanderers, I just stopped and looked at the person as if to say, that’s out of line.

You write about training off the field and maintaining a performance diary. Did you know of other umpires who did something similar?
Not at all. I really enjoyed trying to go places where people in my side of the sport hadn’t been before. The performance diary was around sleeping patterns, food and what sort of routines you get into on the umpiring circuit. I’d keep a diary of when I’d wake up, when I’d go to bed. I’d combine that with a food diary. In the morning I’d take my heart rate and give myself a happiness score out of 10. Then I’d try to track those results to my better days of umpiring.

Did you have ways to visualize yourself officiating in a match situation?
Cricket’s funny, where we don’t actually practice like we play, even the players. Very rarely can we simulate how we play in a practice scenario. On a match day, I’d do a couple of laps of the ground and start to feel the atmosphere and visualize what happens from when you walk out there to getting that first ball right.

We’re lucky in the subcontinent that most of the practice sessions occur right on the ground. In other countries, the practice nets are outside the stadium. In the 2011 World Cup, I used those net sessions to really soak up and visualize the atmosphere of the crowd, the bounce, carry, pace...

When you talk about third umpires, practice looks like a Skype session. We use video examples, most of which are put on a drive which other umpires can use as a third umpire net session. There are a couple of boards that are using virtual reality as a way of helping on-field umpires.

You’ve spoken about the importance of umpiring partnerships.
There are some umpires who you’ll naturally work better with because you’re similar or you’ve had that off-field relationship. If you need to be a team in the match, it’s really important to be a team away from the match, doing some sightseeing, starting to know each other. When the match comes and you have to make some tough decisions, you want to be side by side.

After retirement, did you find yourselves umpiring in your head?
I’m certainly watching the umpires. I’m not a good cricket-watcher, I’m looking at why the umpires are doing the things that they are. It’s like going to work.

Your comments on the umpire’s decision to award six runs, as opposed to five, for the overthrow off the fourth delivery in the 2019 World Cup final were widely discussed.
Hopefully people from that example will appreciate how difficult officiating can be. My comments were purely designed to educate and provide clarity. People were unfortunately putting too much focus on one delivery as being the determinant of who won and lost.

I spoke to (on-field umpire) Marais (Erasmus) later. He said he thought the comments were fair and objective. My motive is never to criticize match officials because I know how hard it is.

Do you have a favourite decision that you made?
We tend not to remember the fantastic decisions; we tend to remember the bad ones. I don’t think there’s a favourite but it’s always nice when you see the ball so well—like a caught behind, you know it’s past the bat and it’s hit the bat pad.


Was it satisfying to be vindicated upon review?
Absolutely. Let me give you an example. 2011 World Cup. Johan Botha is bowling against the West Indies. Big appeal on Chris Gayle, LBW. I give it not out. South Africa review. I went upstairs. There’s a delay on ball tracking. It’s the longest two minutes of your life when your decision’s being dissected.

I start to think, if I get this wrong, in my first over of my first match of the World Cup, what does that look like? Then it comes back: umpire’s call. And I’m going, yes! You celebrate that internally but you can’t show any emotion.

Do umpires enjoy the game while on the field?
Some do, some of the more natural umpires. Me, I disengaged from the players or the emotion of the contest because that helped me focus on what I had to do. I tended not to watch the scoreboard or notice who was batting or bowling.

You also write about the discomfort of officiating your children’s cricket games.
That’s happened far too many times. My oldest son has always given me a hard time when he doesn’t like my decisions. He probably gives me more grief about my decision-making than most of the international players.

I remember once, when he was little, I was umpiring at the bowler’s end, and there was a close run out appeal. His side was in the field. This poor little kid was trying to make his ground and was probably a fraction short. But he tried so hard and I thought, this guy deserves a break, and I gave him not out. Harry just went to town on me. Another time, he asked for DRS, and then said to his mum: “I don’t want dad to umpire at any of my games."

This interview appeared in Mint.
Posted by a fan apart at 5:50 AM