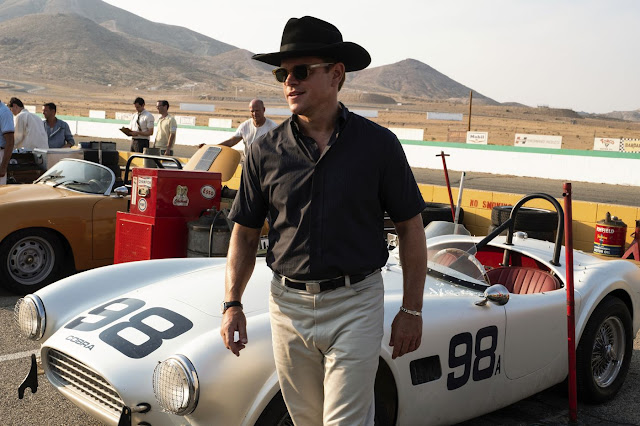 He may not churn them out like Michael Curtiz, but James Mangold has range to match the Casablanca director. He’s bounced from shadowy crime film (Copland) to nervy indie (Girl, Interrupted), romantic comedy (Kate & Leopold) to big-budget nonsense (Knight and Day). The general consensus was that his last feature, the dour X-Men standalone Logan, was excellent (it was – for a comic book franchise film). His latest, Ford v Ferrari, finds him in a much happier mood.

In the early 1960s, Ford was in a slump and Lee Iacocca, then an up-and-comer in the marketing division, had a radical solution. To get the kids buying your cars again, he told Henry Ford II, you need to make one that can win a race: not dusty NASCAR, but shiny Le Mans in France. Ford agreed, and Iacocca drafted in designer Carroll Shelby to come up with a machine that could compete with reigning champion Ferrari. Shelby, in turn, brought in English race car driver Ken Miles, known for his brilliance inside the car and his short fuse outside it.

This much is fact, but it’s the shading within the lines that makes this an unexpectedly light-footed and pleasurable experience. Mangold dresses everything up in Jacques Demy colors. Phedon Papamichael’s cinematography has a sun-kissed glint. And there’s a fantastic ‘60s pop soundtrack: the Kingsmen's version of "Money (That's What I Want)", the lesser-known Byrds instrumental “Stranger in a Strange Land", James Burton’s supercharged “Polk Salad Annie".

Casting Matt Damon as Shelby and Christian Bale as Miles is a canny decision for the contrast it offers up. Damon is one of the least demonstrative performers out there; it’s not often you catch him 'acting'. And you’ll rarely catch Bale not acting—he does everything he can to make sure you’re not looking at anyone else when he’s onscreen (Mangold had used him similarly in 3:10 To Yuma, opposite the introverted Russell Crowe). He seems to relish being able to speak in his native accent here and generally play the fool. Damon holds the film steady, Bale does everything but address the camera.

There’s another matchup, not as apparent but just as effective. In a wonderful, almost silent cameo, Remo Girone plays Enzo Ferrari, racing car designer supreme. Iacocca (Jon Bernthal) goes to him with Ford’s offer to partner up on a car; the master’s response, delivered in halting English, is devastating: “Tell him he’s not Henry Ford." The reserved, European artistry of Girone’s Ferrari is contrasted with the all-American force of Tracy Letts’ Henry Ford II. Letts is so blustery and god-like that the scene where he breaks down after enduring a high-speed lap in his own racecar lands perfectly. “I had no idea," he tells Shelby repeatedly.

In 2013's Rush, Ron Howard – like Mangold, another metteur en scène – made a racing movie that people who don’t care for the sport could watch. Ford v Ferrari has a similar quality, though it delves deeper into the mechanics of the sport. The valves-and-engines talk flew past me, but when Miles is strapped in and driving, it doesn’t matter. As an F1 non-watcher, I’ve never had occasion to appreciate the high-risk game of chicken that is two drivers, neck and neck, accelerating as they approach a turn. Mangold achieves this through sound design and rapid cutting – a concise example of action cinema problem-solving.

Ford v Ferrari isn’t the wittiest film, or inventive in its narrative strategies. It is, instead, what used to pass for a Hollywood tentpole offering before franchises took over everything: just clever enough, and satisfying in its bigness. It’s the sort of film you can enter at any point when it comes on TV and would probably see through to the end.

This review appeared in Mint.
Posted by a fan apart at 5:20 AM