New Kings Of The World: Review 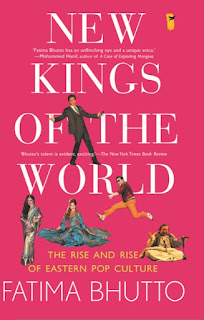 The central argument of New Kings Of The World is encapsulated in two sentences separated by a paragraph. “This run of American pop culture was uninterrupted for decades, unhindered by any serious global competition," and, a little later, “But new cultural industries have flattened the playing field." Pakistani writer Fatima Bhutto’s new book is a consideration of recent cultural phenomena out of Asia—Bollywood; Turkish TV dramas known as dizi; K-pop. These genres, she argues, speak to a world transformed by urbanization and mass migration better than Western cultural offerings can.

Indian readers may find themselves skimming through the early Bollywood chapters: crisp but familiar snapshots of Hindi cinema history. Bhutto does posit one intriguing theory—that the patriotic romances targeted at non-resident Indians in the 1990s and early 2000s (and treated with a kind of benign nostalgia by critics here) may have led to the aggressively nationalistic films of today—but the decision to keep Shah Rukh Khan as a focal point is a conservative choice. Khan always makes for good copy, but is no longer a culture-defining force; I would have loved to see Bhutto train her dry wit on someone like Akshay Kumar or Priyanka Chopra Jonas.

Bhutto knows that Khan isn’t all he used to be. “With his rivals snapping at his heels, today Khan seems marginalized, or at least viewed with suspicion by India’s increasingly muscular right wing," she writes. Outside India, though, he is still supreme, and Bhutto illustrates this by setting one chapter in Dubai and Abu Dhabi, where he’s shooting an episode of a TV prank show, and another in Lima, where Bollywood fan club members swear by him.

New Kings Of The World is a rare book one wishes were twice its length. Just look how far and wide Bhutto ranges in her discussion of dizi, starting with the Pakistani TV dramas of the 1980s and weaving in Turkey’s insecurities about its place in the world; the tropes of dizi; the reasons for its pan-Arab popularity; the nuances of dubbing in fusha (formal Arabic); and the view from a refugee camp in Lebanon. It is, pun not intended, dizzying and impressive, but there is a longer book hovering over the slim frame of this one. This might have allowed more parallels to be drawn between the genres—for instance, if the national sentiment that led Turkey to create TV set in a fabled past bears comparison to Bollywood’s attempts at overtly patriotic historical drama.

K-pop is relegated to the epilogue, for some reason, but it’s a sparkling chapter, right from Bhutto’s description of the form (“the kind of music you might play in an interrogation cell to induce talking except for the irritating fact that it’s genuinely catchy"). You can sense the author enjoying herself, dropping arcane trivia into footnotes and transcribing the bizarre lyrics of BTS’ 'War Of Hormone'. Again, there is so much of interest here that it’s frustrating the chapter runs a mere 16 pages—just a discussion of how the Asian financial crisis might have led to K-pop could have filled that space.

For a work of cultural criticism—not always a guarantor of big laughs—New Kings is frequently, slyly funny. Here’s Bhutto on the Turkish series Ask-i Memnu: “It was fifteen episodes in before I could actually tell whose ask (love) was memnu (forbidden) because of all the ask floating around." And, in two successive footnotes: “This was (Shah Rukh) Khan’s fifth Rahul"; “His seventh Rahul". At 165 pages, this is a bite-sized book, easily consumed in a sitting or two. A follow-up (“Fresh New Kings Of The World" has the added benefit of sounding like a K-pop song title) would be welcome.

This review appeared in Mint Lounge.
Posted by a fan apart at 5:39 AM