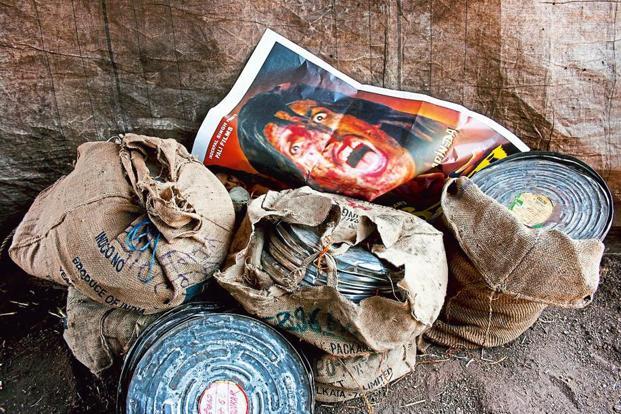 In 2015, the Cannes Film Festival instituted L’Œil d’or (The Golden Eye), an award for the best documentary in any section. This year, Shirley Abraham and Amit Madheshiya’s The Cinema Travelers will compete for this award, as well as for the Caméra d’Or (Best First Feature). When I met the duo at a Yari Road coffee shop in Mumbai, a day before they left for France, they appeared pleasantly freaked out by the heady company they found themselves in. “We’re in competition,” Madheshiya said disbelievingly, “with the great Laura Poitras.”

The project was conceived in 2008. For a couple of years, single-screen theatres had been shutting down across metros, and this led Madheshiya and Abraham to wonder how this experience was reflected in villages. They began visiting tent cinemas in Uttar Pradesh, West Bengal and Maharashtra. “It was a sight you’ve never seen before,” Abraham said of the first screenings they witnessed in Maharashtra. “So many travelling cinemas, so many tents hitched to the back of trucks, with screens erected inside and people watching. We were so curious: How does this still exist?”

Though it was their intention from the start to make a documentary, Madheshiya and Abraham wouldn’t start the actual business of filming for another three years. Instead, they dove into research, visiting archives and compiling oral histories. Information wasn’t easy to come by; it’s as if travelling cinemas barely existed as far as the larger narrative of Indian film was concerned. Eventually, they traced the first mentions of tent cinemas back to the mid-1940s, though they are fairly certain that the tradition dates back to the preceding decade. It began when people from villages came to Bombay, as it was then called, saw the cinema, and were so enamoured of it that they took back the technology. An early source of equipment, according to a recurring but unverifiable legend, was a Parsi businessman who sold projectors outside the Roxy theatre in Bombay.

By 2011, things were looking up. That year, Madheshiya won the prestigious World Press Photo award for his still photographs of night-time viewers at a tent cinema. Their research was nearing completion, with the help of funds from the India Foundation for the Arts and a fellowship from the Heidelberg University in Germany. They had also arrived at a theme that lent some artistic urgency to their project: the adverse impact of digital technology on travelling cinemas, in terms of changes in equipment and the erosion of the community experience of watching films. “We had travelled enough with our people to know that their association with a certain form of cinema—with film, with film projectors—is alive and deep and profound,” Abraham said. “We knew that this could be a lens to look at their lives, using that moment of change to explore something.”

From 2011-15, they shot the film, Madheshiya handling the cinematography and Abraham the sound recording. As with the photographs he had taken earlier, he decided to use only natural light while shooting. “I think the aesthetic really emerged from that limitation,” he said. Abraham added: “Our film isn’t ‘constructed’ the way films like, say, The Look Of Silence are; it’s more about instinctively following people. So in terms of not having a light, it’s about keeping close to what you see.” Not that they’re averse to constructed documentaries. Errol Morris, who used radical crime scene recreations in The Thin Blue Line, is a favourite. So is maverick German film-maker Werner Herzog.

Though they hadn’t edited a film before, Abraham and Madheshiya took the advice of Jonathan Oppenheim (editor, Paris Is Burning) and decided to do it themselves—it was edited, with “plenty of false starts”, from 2014-16. They qualified for and participated in Sundance Labs—residential workshops run by the US-based Sundance Institute in which directors can work out kinks in their work-in-progress films in collaboration with experts in a specific field. For the Sound Design Lab held at the Skywalker Ranch in California, they were paired with Pete Horner, a former collaborator of Francis Ford Coppola and Walter Murch (another of Madheshiya’s heroes) and boasting of an impressive filmography himself, from Upstream Color to Best Of Enemies and Jurassic World. After the workshop, Abraham and Madheshiya asked Horner if he would like to do the sound design for the entire film. He agreed.

After about two years of editing, the film was finally complete. Now, its makers are headed to France, the land of the Lumière brothers, the first directors ever. This dovetails neatly with something Madheshiya said after winning the World Press Photo award in 2011 for his images of patrons of the travelling cinemas. “What is most romantic about these cinemas is that they still preserve the primitive experience of watching cinema,” he said. “When cinema was first introduced to the world in 1895—and 1896 in Bombay—this is how the first contact must have been. This bond is something that still exists in these cinemas.”
Posted by a fan apart at 3:58 AM