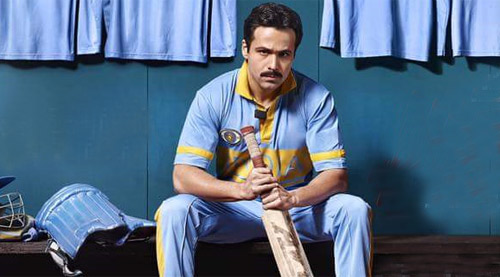 Mohammad Azharuddin may or may not have sold out his team and country, but at least he was never boring. One cannot say the same for Azhar, Tony D’Souza’s inert biopic on the former Indian captain. The film focuses on everything that made Azhar controversial—the match-fixing allegations that got him banned from the sport, his leaving his first wife for actress Sangeeta Bijlani—and pays little attention to what made him memorable : the elegance of his batting, his cat-like fielding, the lazy nonchalance, the popped collar.

Considering Azharuddin reportedly allowed the film to be made only after he’d approved the script, it shouldn’t surprise anyone to learn that Azhar is completely convinced of its subject’s innocence. Rajat Arora’s screenplay jumps back and forth in time, showing Azhar (Emraan Hashmi) at various stages of his career, from his troika of centuries on debut to his first meeting with bookie MK Sharma (D’Souza is so enamored of this scene that he uses it twice). We also check in at regular intervals on the court case that eventually saw him cleared of fixing charges in 2012. The proceedings are comical, not because the defense attorney (Kunal Roy Kapur) is buffoonish, but because the arguments offered by the prosecuting lawyer (Lara Dutta) are so ridiculous they wouldn’t stand up in a food court, let alone a court of law.

Almost in spite of itself, the film does manage a moment or two of insight. Anyone who remembers Azhar’s cliché-ridden post-match interviews with fondness should at least crack a smile during the courtship scene between him and his first wife, Naureen (Prachi Desai), in which he’s shown as incapable of carrying on a conversation without slipping into cricket-ese. There’s also the scene in which the president of the cricket board offers the soft-spoken cricketer the Indian team captaincy and simultaneously hazes him, making him shout over a recording of a noisy crowd just to prove he can raise his voice when needed.

Scenes like these work because they riff on the Azhar we once knew. But the film isn’t interested in bringing him down to our level—it wants to raise him back to where he used to be. Even if Azhar wasn’t so sketchily written and the cricket scenes weren’t so tacky, this would be a tall order. The makers might have been better off trying to explain how he pulled off those impossible leg glances rather than how he took (but didn’t actually take) money to throw matches.

This review appeared in Mint.
Posted by a fan apart at 3:52 AM