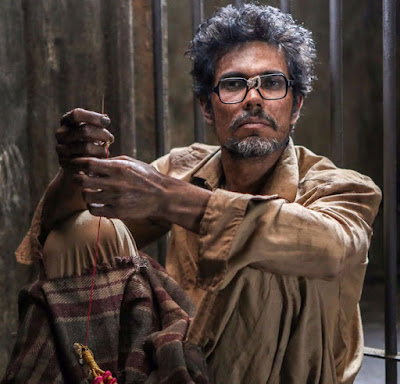 That Sarbjit favours emotional manipulation over restraint or logic is evident at several points, but one moment in particular stands out. After years of incarceration in a Pakistani jail, Sarbjit Singh (Randeep Hooda) will finally be set free. We see him emerge smiling from behind the guards at the border and cross over to the Indian side. As his sister, Dalbir (Aishwarya Rai Bachchan), wife Sukhpreet (Richa Chadha) and daughters rejoice, he kisses the ground. Then, without any noticeable change of perspective, we see a different person standing where he was. The Pakistanis have released another prisoner in his place, Sarbjit’s still in prison and the scene we’ve witnessed is a lie.

Imagine if director Omung Kumar had played this moment straight. It would have been a kick in the gut, to see hope fade from the faces of the family members once they realize their 22-year wait for Sarbjit isn’t over. But by going too far—by trying to wrench that extra tear from the viewer—Kumar and screenwriters Utkarshini Vashishtha and Rajesh Beri squander the emotional possibilities of the moment, initially confusing and then irritating the viewer. Which is also the story of the film at large.

In 1990, Sarabjit Singh, a farmer from Bhikhiwind, Punjab, crossed the India-Pakistan border and was arrested by authorities there. He was jailed and accused of spying for India and setting off blasts that killed 14 people in Lahore and Faisalabad. Though Singh denied these charges, he was found guilty and sentenced to death. The death sentence was stayed indefinitely in 2008, but he remained in jail there till 2013, when he was murdered, allegedly by other inmates.

In telling Sarabjit’s story, Kumar removes everything that might obstruct the viewer’s sympathy. The possibility that Sarabjit might have been a spy—as an unnamed source told the Hindustan Times in 2013—isn’t entertained; neither is the rumour that he converted to Islam while in prison. These stories might not be true, and even if they are, Kumar has every right to exclude them if they run counter to the spirit of the film. The problem with Sarbjit isn’t so much the material as the constant emotional hectoring. Dalbir, working desperately to free her brother, spends most of the film shrieking over the bullying background score. As the story winds on, her speeches become more grandiose and simplistic; at one point, she challenges the Taliban, declaring “Hum Hindustaniyon ne kabhi peeth dikhana seekha hi nahi hai”.

There’s little doubt that Rai is moved by the character she’s playing. You can see her get lost in the emotion—voice hoarse, eyes red, body quivering with rage. The result is a lot of visible hard work, but not quite a great performance. Chadha, catatonic for the most part, still manages to inject a few shades of doubt and jealousy into her under-written character. Rai shows us Dalbir’s determination and little else. She attacks every scene with such hoarse fervour that she turns Dalbir into something less than a character and more of an ideal.

Even as Rai becomes more strident as Dalbir ages, Hooda’s performance as the older Sarbjit attains a kind of broken poetry. The wheezing voice he adopts is as shocking as the man’s emaciated, ravaged body; to use a Bob Dylan phrase, the ghost of electricity howls in the bones of his face. It’s difficult not to get swept up at certain points in the film, like when Sarbjit is visited for the first time in jail by his sister, wife and daughters. But this moving, brief reunion is immediately followed by a crude protest scene outside the jail and another croaky lecture by Dalbir. In its efforts to maintain a stranglehold on the audience’s emotions, Sarbjit forgets to leave well enough alone.
Posted by a fan apart at 4:04 AM