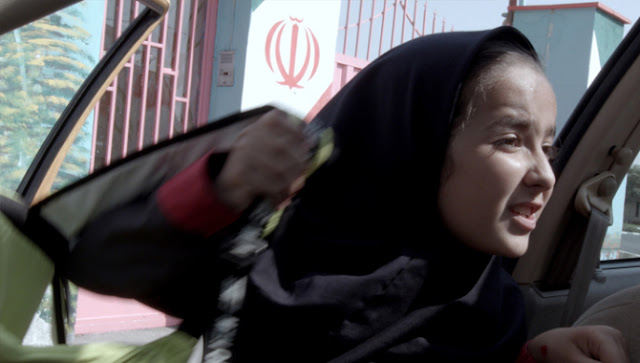 One of the ironies of the Iranian government’s 2010 decision to ban Jafar Panahi from directing films for 20 years is that this seems to have spurred him on creatively and furthered his influence. Had he stopped working after the ban, he would still have had a place in Iranian cinema history, having made films like The Circle, Crimson Gold and the remarkable Offside. But he didn't, choosing instead to subvert the diktat with a run of films that is as strong a statement of artistic freedom as anything in the recent arts.

His first project after the ban, 2011’s This Is Not A Film, appeared to be a little home movie about Panahi coming to terms with the ban. It’s actually a high-wire act. Panahi can’t seem like he’s directing, yet he can’t stop directing either—it’s his natural state. The film was smuggled out of the country on a flash drive hidden in a birthday cake, and premiered at the Cannes Film Festival. Panahi’s next film, Closed Curtain (2013)—about an artist who’s afraid he’s being watched, as Panahi most certainly was—was a more cerebral piece, and closer to an actual “filmed” film.

Taxi returns Panahi to the documentary style of This Is Not A Film, but the ruefulness has been replaced by a wry humour and a surprising ebullience. The film takes place almost entirely inside a taxi, with the director as driver, carrying forward the conceit of Panahi not officially “directing” the action. There’s a camera in front that the passengers acknowledge, but it’s obviously not the only one being used. It’s all an elaborate joke, one that most of the “passengers” are in on. “Mr Panahi, that man and woman... they were actors, right?”, a seller of pirated DVDs asks about the previous fares. Panahi just smiles.

Taxi is funny and revealing enough to be enjoyed without any knowledge of its subtext. The passengers include a street tough who argues for capital punishment, two pushy old ladies with a goldfish, an injured man and his frantic wife (whose story reaches a deliciously dry conclusion off-screen). There’s Panahi’s schoolgoing niece, whose movie project for class allows the film to send up the Iranian censors: One of the rules is that she avoid “sordid realism’”, another stipulates that the good guys have beards. And there’s Panahi’s friend, a lawyer, who, in a heart-warming moment, offers a rose to the audience, the “people of cinema”, who “can be relied upon”.

This isn’t the first time an Iranian director has done the whole drive-around-Tehran-in-a-car thing. Abbas Kiarostami’s Ten, for instance, was modelled along similar lines. But Taxi is hardly a retread: the two films are very different in tone, treatment and subject matter. Kiarostami’s film, less playful than Panahi’s, was mainly about the position of women in modern Iranian society. Taxi, on the other hand, revolves around broader themes of freedom, censorship and subversion. Both were widely acclaimed: Ten was included in film journal Cahiers du Cinéma’s “Best Films of the 2000s” list, while Taxi won the Golden Bear at the Berlinale earlier this year. Both are films for the ages.

This review appeared in Mint.
Posted by a fan apart at 2:12 AM