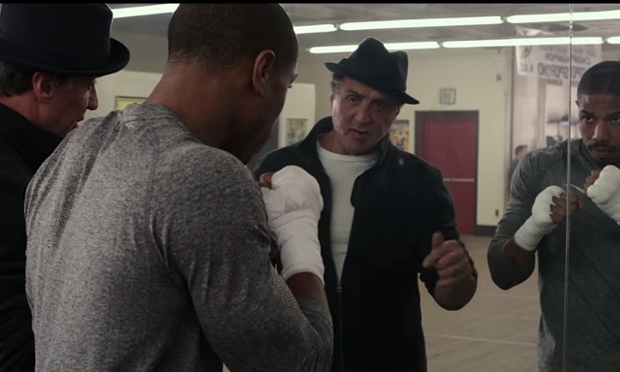 In Rocky and Rocky II, Sylvester Stallone’s perennial underdog was pitted against Apollo Creed, heavyweight champion of the world. He lost to him in the first film, and beat him the second time around. In Rocky III, Creed took over as Rocky’s trainer after the death of his friend and coach Mickey. And in Rocky IV, Creed died after a brutal pummelling by a Russian fighter, leaving Rocky—who was in his corner—to agonize over whether he could have saved his life by throwing in the towel earlier.

When we first encounter Adonis Johnson, he’s a suit-and-tie-wearing executive moonlighting as a boxer at an underground ring in Tijuana, Mexico. He wins his 15th straight fight, quits his job, and suddenly we’re in a flashback, with a young Adonis, fatherless and disturbed, in a correctional facility. A woman seeks him out there; she reveals that she’s his father’s wife and wants him to live with her. What was his name, he asks? Instead of her answer, the film’s title appears emblazoned across the screen: Creed.

Now, this is undoubtedly mainstream corn. But it’s done with such economy and feeling that you not only accept the emotional blast but are grateful for it. The heartfelt franchise film has become a rarity nowadays—and it makes sense that a spin-off of Rocky, the very model of a heart-on-sleeve sports movie, would be the one to fill the breach. But Creed is also fleet-footed and taut, rather like the aptly named Adonis, who seeks out Rocky Balboa and asks him to be his trainer. Rocky’s not interested initially—he’s still feeling guilty over Apollo—but Adonis wears him down. They start training and, in the spirit of the series, Adonis finds himself up against the heavyweight champion of the world, “Pretty” Ricky Conlan (Tony Bellew).

Creed is directed by Ryan Coogler, whose first feature was the well-received 2013 indie Fruitvale Station (Michael B. Jordan, who starred in that film, plays Adonis). It’s a surprisingly smooth shift to the mainstream for Coogler. Creed hasn’t an ounce of fat of it, burning through its pleasingly predictable plot with good humour and tremendous energy. Nothing impedes the film’s onward drive: not Adonis’ daddy issues, or his taking a liking to a singer called Bianca (Tessa Thompson), or the revelation that Rocky has cancer.

With its tearful mothers and musical interludes and unfettered emotions, Creed comes close to the spirit of films made in India. What could not have been achieved here is the kind of immediacy to the fighters it allows. Coogler keeps the fights free of distracting camera effects, and the results are as close to the real thing as possible. You can feel the weight of the punches as they land, hear the whistle of the rope as Adonis skips during training.

And then there’s Stallone, 69 years old, the stallion put out to pasture. You can sense the film’s affection for him in the way it allows him to ramble on, to say old-man things in that familiar semi-indecipherable gurgle of his. Stallone may not have become a great actor, but he’s found a way to be an affecting presence. For the first time in a long while, it’s a pleasure to be in his corner.

This review appeared in Mint.
Posted by a fan apart at 2:31 AM