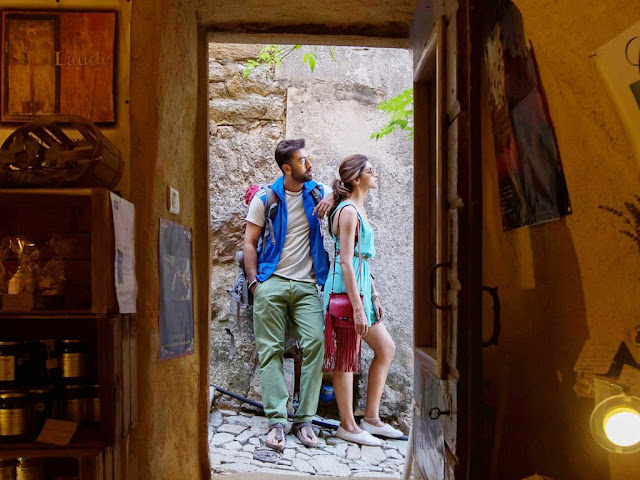 By now, it’s pretty much accepted that Imtiaz Ali is Indian cinema’s last great romantic. While it’s true that his films are all founded on love—invariably lost, sometimes found—there’s another theme that runs through them: the search for the self. Ali’s characters are often found adopting new identities (Rockstar), being challenged to reevaluate existing ones (Jab We Met), rejecting ones mandated by society (Highway). Tamasha, his sixth film as writer-director, is his most explicit examination of these issues.

Two Indians meet on the island of Corsica. She’s about to reveal her name when he stops her. Let’s not tell each other anything, he says, or it’ll be the same old story. He tells her his name is Don; she plays along, calls herself Mona Darling. Other rules are set: no staying in touch afterwards, and no sex. Neither of which makes much sense—it seems like the ideal scenario for a torrid, commitment-free affair—but if characters were making sound emotional decisions, this wouldn’t be an Imtiaz Ali film. The two of them spend a blissful couple of days together, share one kiss, and then she leaves.

Four years pass. The girl (Deepika Padukone) hasn’t been able to forget the brazen, charming guy (Ranbir Kapoor) she met. She haunts a bar she has reason to believe he’ll be at. Incredibly, she finds him there. In a beautifully awkward scene, they introduce themselves as Ved and Tara. He hasn’t gotten over her either, and asks her out on a date. It’s obvious that something’s wrong, but they persist. It’s only when he asks her to marry him that she refuses. She was expecting the rake she met in Corsica, but Ved is just a tie-wearing, corporate lingo-spouting Everyman.

As Ved disintegrates, so does the film. Considering it teases the idea that all stories are essentially the same—a generalization I have trouble getting on board with—there seemed a very real possibility that Tamasha would turn into Ali’s 2011 film Rockstar, the longest sustained hissy fit in Indian cinema after Devdas hit the bottle. Luckily, it doesn’t go that far: Ved is too meek to be truly self-destructive. Returning to his childhood home, he visits an old man who used to tell him folk tales, and demands to hear his own story’s ending. When he’s thrown out, the message is clear: write your own destiny.

While no one could accuse it of being subtle, Tamasha is affecting in parts, thanks in large measure to its lead players. Kapoor, with his gift for light comedy and mimicry, outpaces Padukone in the Corsica leg, but when they return to India and things become complicated, her pain is as palpable as his (this in spite of Tara being an underwritten character). Ali’s direction has also acquired a lightness of touch; when we first see Ved as a child, the legend reads “Shimla, flashback”, a little joke but also perhaps a reference to how memories are edited into home movies in our imagination. What he might need, though, is a writing partner, someone who can supply him stories and characters that aren’t composites of what he’s written earlier.

This review appeared in Mint.
Posted by a fan apart at 2:27 AM

You really write well and very much to the points need attention. Impressed and Learning from your writing skills. Thanks Uday :)