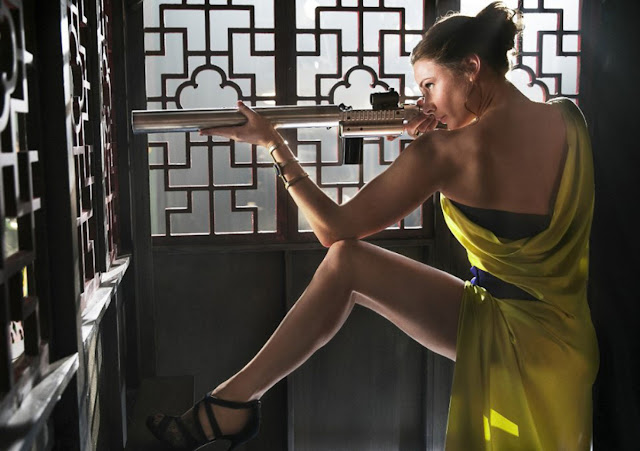 The real star of Mission: Impossible – Rogue Nation isn’t Tom Cruise, playing Ethan Hunt here for the fifth time. It isn’t Rebecca Ferguson, as the lethal Ilsa Faust, though she comes very close. It isn’t writer and director Christopher McQuarrie (Jack Reacher). To my mind, the standout in Rogue Nation is Robert Elswit. The cinematographer, who also did the last M:I film, but is better known for his work in There Will Be Blood and Nightcrawler, gives the film a dark, burnished look that’s a treat for the eyes. He does what Roger Deakins did for the last Bond film, Skyfall: classing up the whole affair without sacrificing any of the thrills.

Skyfall is a reasonable comparison in other ways. That film had a Bond who was feeling the effects of age, questioning his own judgement. Rogue Nation has similar intimations of mortality as far as Hunt is concerned. Throughout the film, he finds himself a step behind the shadowy Solomon Lane (Sean Harris), who’s running an organisation of ex-spies called the Syndicate, an “anti-IMF” bent on world domination through surgical terrorist strikes. There are repeated suggestions that Hunt has met his match, and that this might be the last mission for the Impossible Missions Force gang: Hunt, Luther (Ving Rhames), Benji (Simon Pegg) and Brandt (Jeremy Renner).

In Rogue Nation, Hunt becomes the hunted, pursued not only by the Syndicate but also by the CIA, which has ordered the closure of the IMF. McQuarrie keeps things pacy and slightly tongue-in-cheek: it’s possible to see this as the work of someone who, in another era, wrote The Usual Suspects. Nothing demonstrates this better than the long opera house sequence in Vienna, where Cruise, Ilsa and two hired guns battle it out while Puccini’s Turandot unfolds and Elswit makes sublime use of shadows and the lush setting. Then, perhaps because she’s called Ilsa and she’s caught between two men, the action heads to Casablanca, where there’s a spectacular but exhausting car chase. Finally, everyone heads to London to execute a plan in which the British prime minister is just a pawn in the game.

None of this is particularly plausible, but it’s more or less pleasurable throughout. Ferguson, whether in a slinky evening dress or a jumpsuit, is both dangerous and sympathetic (her character’s surname is a clue to the kind of deals she’s made) in a way that Hunt—competent to the point of being superhuman—isn’t. Pegg has no problem milking Hollywood’s continued casting of him as a bumbling Britisher; Rhames gets the worst lines (though he says them as if they’re the best lines); and the talented Renner is, not for the first time in a major franchise, superfluous. Which leaves us with Cruise. As long as he’s jumping, leaping, diving, climbing or killing, he’s without peer. It’s only when the camera settles on him are we reminded that this is a 53-year-old man. Cruise looks exhausted when he’s standing still and talking. But then he starts to run, and all’s right with the world.

This review appeared in Mint.
Posted by a fan apart at 2:27 AM