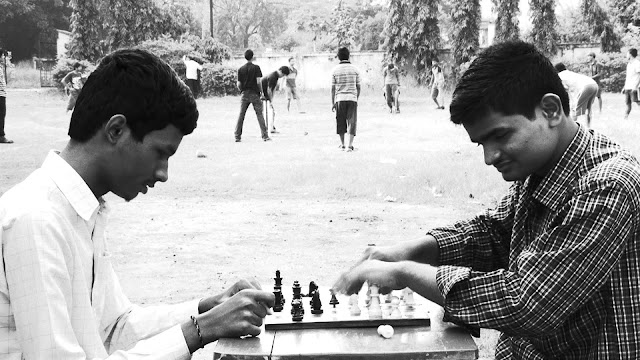 In the wrong hands, a documentary about blind chess players could have been unbearable. It isn’t tough to imagine how an overly righteous treatment of the subject would look—weepy strings on the soundtrack, parents with hard-luck stories, slo-mo shots of players raising their hands in triumph. Luckily, Algorithms isn’t concerned with being “inspiring” or “heartwarming” or Satyamev Jayate-like. It sticks close to its subjects, respecting their skill, refusing to sentimentalize them.

The film, made in 2012 but getting a theatrical release in India now, follows three junior players: 12-year-old Sai Krishna from Chennai, 16-year-old Anant from Bhubaneswar and 15-year-old Darpan from Vadodara. We follow their progress over three years as they compete in tournaments within and outside India. We see their personalities take shape: Darpan, charmingly garrulous; Sai Krishna, serious, confidently cool during matches and emotional afterwards; Anant, trying to balance chess, his studies and his diminished economic circumstances. Tying it all together is Charudatta Jadhav, a champion blind chess player who has dedicated his life to developing the game in India.

Algorithms eschews voice-over narration, which helps it avoid portentousness and gives viewers a chance to ease their way into the film. There’s no great effort made to explain how chess for the visually impaired works—one eventually finds out that the black pieces have an identifying peg on them. There’s a great scene early on in which Anant asks a sighted player he has just lost to, about the “end game position”; when his opponent says he can’t remember it, Anant says that he does and starts rearranging the board. Later in the film, Sai Krishna rattles off a game from memory. All chess players have a picture of the board in their mind, but this scene shows how this is literally true for blind players.

The film thrusts the viewer into the midst of games, amongst clutched foreheads and impatient taps, like any good sports film ought to. It has been shot—very fetchingly, by the director, Ian McDonald—in black and white. Symbolically, this makes sense: a minor sensory deprivation (colour) standing in for a major one—sight. It’s also fair—if a little too on the nose—for a film about chess to mimic the visual pattern of a chessboard. Though he’s made a number of smaller documentaries before, this is McDonald’s first feature-length film, and he displays a sure hand, ratcheting up the pace during matches ('Guitar' Prasanna’s score is a huge help in this) before calming things down and checking in with his charges and their very supportive families.

Algorithms could easily just have been a film about Jadhav, who went blind in his teens but nevertheless became a champion player, and then stopped competing so that he could coach others. There’s a real poignancy to the scene where he shows two children his pieces from his playing days, or when he urges Sai Krishna to develop his game and not become “stagnant” like he did. Jadhav’s dream, stated early on and reiterated throughout, is to mentor a blind Indian grandmaster. One hopes that this spare, thoughtful film will rally some support around those working towards this very worthy goal.

This review appeared in Mint.
Posted by a fan apart at 1:20 AM

Email ThisBlogThis!Share to TwitterShare to FacebookShare to Pinterest
Labels: Documentary