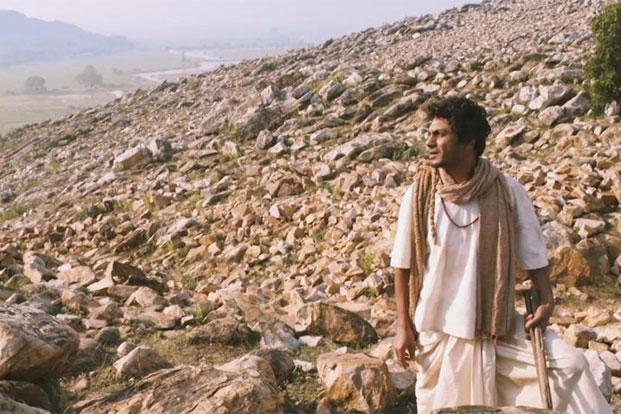 For 22 years, Dashrath Manjhi had a running battle with a mountain. Working mostly by himself, he tried to clear a path from his village in Bihar, Gehlour, through to the other side, so that the very long journey around the mountain could be reduced to a much shorter one. His fellow villagers, understandably, thought he was crazy. But Manjhi was eventually successful—the 360ft-long, 30ft-wide path was cleared in 1982; some 30 years later, a proper road was made there.

Ketan Mehta’s biopic grounds Manjhi’s (Nawazuddin Siddiqui’s) struggle in his love for his wife, Phaguniya (Radhika Apte), and his grief over her death (she lost her footing on the mountain and injured herself; the delay in getting her to hospital is the reason for her death in the film). Basing Manjhi’s almost superhuman determination on his personal tragedy allows the audience to become emotionally invested in a task that’s more Sisyphean than Herculean. Yet the problem isn’t so much the aspects of Manjhi’s life that Mehta chooses to dramatize, but the way he goes about doing so.

Anyone who has seen Mehta’s last film, Rang Rasiya, will know that the veteran director’s penchant for melodrama has strengthened, rather than tempered, with age. It’s been a while since someone working on the fringes of mainstream cinema has made a film so full of evil thakurs and virtuous villagers and so free of irony and complexity. The melodrama comes at you in never-ending waves, and it’s exhausting. By the time we get to what should have been a dramatic high point in the film—Phaguniya’s fall and subsequent death—we’ve already seen a whipping, several beatings, a man falling into a kiln, a murder, an axe-wielding Manjhi rescuing Phaguniya from a forced marriage, and a needlessly tense water-birth. And this is before a man starts hacking away at a mountain with a hammer and chisel.

The way the on-screen action is conveyed increases the hysteria. Some of the cinematography by Rajiv Jain isn’t bad, especially the scenes where man comes right up against nature—Manjhi and his wife hiding by submerging themselves in the mud; him licking the plants in a well, trying to extract some moisture. But it’s a rare moment when the camera isn’t either peering down at people or looking up at them, or finding some strange sideways, off-kilter angle to investigate the action from. The background score is insistent and old-fashioned. So is the writing, with Mehta and his co-writer Jakhar Mahendar lobbing half-volleys at red tapeism, the caste system and systemic corruption.

The film tries to turn Manjhi into a Forrest Gump figure, but placing him in the context of events like the Emergency doesn’t serve to illuminate them. He has no opinion on them—much as the film would like to connect him with the outside world, he remains a solitary man with a solitary aim. Perhaps that was the point, but the weaving in of current events pales in comparison with films like Gangs Of Wasseypur, which found smarter ways to incorporate the changing politics of the times into their narratives.

These blind spots are unfortunate, because Siddiqui is as good as can possibly be. It’s a difficult role, not just physically but also because Dashrath Manjhi is both inward-looking and outgoing, clamming up when he’s with other people but holding a running dialogue with a mountain. Apte tries her best, but her accent is way off, and she’s asked to smile indulgently at Siddiqui’s antics too often. Tigmanshu Dhulia and Pankaj Tripathi make for entertaining upper-caste villains, while Deepa Sahi (also the producer) turns up for a brief scene as Indira Gandhi.

Manjhi is rousing, simplistic cinema, just about saved by a fantastic lead turn. It’ll do if all you want is a folk tale, but I wish the film had chipped away at Manjhi the way he chipped away at that mountain.

This review appeared in Mint.
Posted by a fan apart at 1:16 AM