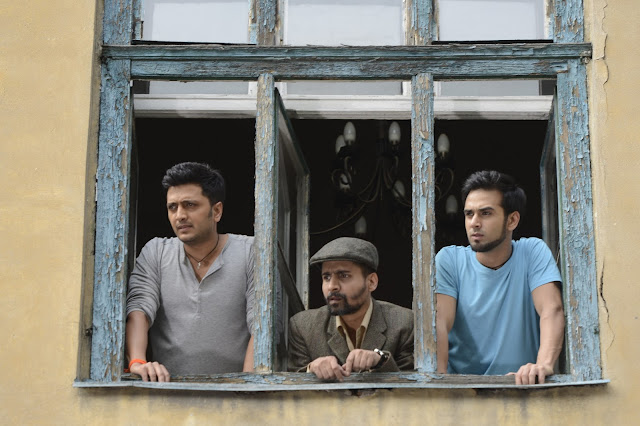 Around halfway through Bangistan, there’s a home shopping-style commercial for a bomb. It’s deliriously absurd, with a bald Russian arms dealer listing the advantages of a bomb strapped to a bikini-clad woman, and a testimonial of sorts from a one-armed jihadi. I mention this scene because it might be the one time this film has a funny idea and manages to see it through. I went in to Bangistan semi-hopeful—I have a soft spot for Riteish Deshmukh’s comic turns, and the idea of pairing him with the cocksure Pulkit Samrat sounded promising. I came out wondering how anyone could come up with a film that makes PK’s take of religious strife look subtle.

In the land of Bangistan, the Muslims live in the north (which looks like Kandahar), the Hindus in the south (which looks like Banaras), and no one wants to get along. Like everything else in the film, the conceit of a fictional country is half-baked: it exists mainly as a hook on which the writers can hang tired gags (there are fake chains like FcDonald’s and Star*ucks), but they’re obviously talking about India and its apparently warring religious factions (that’s satire, folks!). Having done precious little with the idea, the film leaves Bangistan behind altogether after the first half hour. Extremist leaders of both sides send a suicide bomber each to the World Religions’ Conference in Krakow, Poland, and this is where the rest of the film unfolds.

What I found even more inexplicable than the screenwriters creating a fictional nation without having the satire to back up this conceit, is the sheer unnecessariness of Hafeez Ali (Deshmukh) and Praveen Chaturvedi (Samrat) posing as followers of each other’s faith when they go to Krakow. There’s no reason why they couldn’t go as they were and still blow up the conference. On the other hand, if they didn’t try each other’s faith on for size, how will we know that all religions are one, and that what regular folks really want is to love each other? Reel them in with comedy, then hit them with life lessons, seems to have been the game plan here.

If the first half is a series of jokes that never take off (and a couple that take off and go sideways, like errant firecrackers), the second nosedives into a pool of preachiness, broad acting and plain old confusion. So many of the gags here should never have made it past first draft: the cop called Wai Kar Wong; the mercifully brief scene where Samrat does De Niro in Taxi Driver in front of a mirror (there’s a reference to The Untouchables as well). The film culminates in a long scene at the religious summit (which looks more like comic con), where Samrat has an embarrassing breakdown in the bathroom, followed by an equally emotional outburst by Deshmukh in which he essentially tells a gathering of religious leaders that religious leaders are bad news—and is applauded.

Bangistan’s director and co-writer is Karan Anshuman, a former critic. This is his first film; hopefully, he’ll have other, better ones in the future. Still, I’ll be grateful if I can go a year without being subjected to anything as painfully trite as this line from one of Bangistan’s songs: “Mera koi dharm nahin tha / Jab main chhota baccha tha” (I had no religion / When I was a little child”).

This review appeared in Mint.
Posted by a fan apart at 2:14 AM