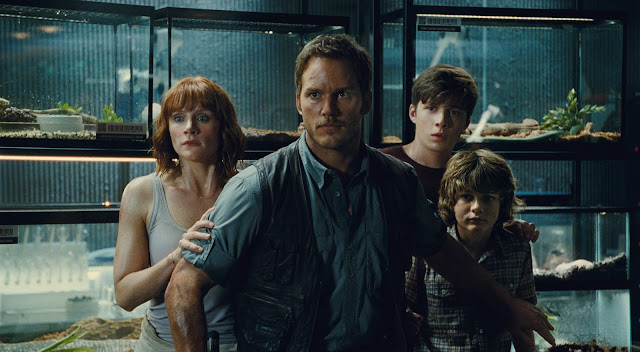 There’s a legendary argument that took place between Steven Spielberg and Paul Schrader during the writing of Close Encounters Of The Third Kind. Spielberg wanted the hero of his film to be a regular guy. Schrader, the original screenwriter had imagined the protagonist as an air force officer and told Spielberg that he wasn’t interested in sending, as Earth’s representative to another world, someone who would go and open a McDonald’s franchise there. “That’s exactly the kind of guy I want to send,” Spielberg replied.

Spielberg is only the executive producer on Jurassic World, but the film, directed by Colin Trevorrow, is the logical extension of the position he’d taken all those years ago. If his Jurassic Park represented an exciting new world, this film shows how that world has been commoditized, packaged and served up as a McDino. Nothing says this more than the first big reveal. Two children run into a room as John Williams’ heart-stirring score from the original movie begins to swell. One of them pulls the curtains aside to reveal…a dinosaur? No, we’re gazing out at something that looks like a very green Disneyland. The sight is so unappetizing that the child turns away from the window before the soundtrack settles down.

Jurassic World takes place 22 years after the events of Jurassic Park, which is the actual amount of time that’s elapsed since the movie released. The park, which has passed into the hands of one Simon Masrani (Irrfan Khan), has become a lot more interactive—a sort of prehistoric petting zoo. The film’s conceit is that dinos have become commonplace in the intervening years, and that newer, scarier hybrids are now being genetically engineered to boost sales. There’s a scene early on when Masrani sees the new hybrid T-Rex for the first time, along with his second-in-command, Claire Dearing (Bryce Dallas Howard). Will it scare the children, she wonders? It will give the parents nightmares, he replies.

That focus on nightmares, perhaps, is what limits Jurassic World. The original film was appropriately frightening—I remember having raptor-filled nightmares afterwards—but it was also suffused with a sense of wonder. This time around, there are plenty of shocks, but the awe is missing. What do you expect, really, when the dinos are so accessible they’re practically tame? One amphibious dino is made to leap for his supper, like a whale in SeaWorld. And though Gray (Ty Simpkins) watches this trick with delight, his elder brother Zach (Nick Robinson) couldn’t care less—he’s busy checking his phone.

Zach and Gray are supposed to be with their aunt Claire, but she’s fobbed them off on to an assistant. Just as you’re wondering whether the soulless career woman cliché might be a big broad, along comes a rugged alpha male. Owen Grady (Chris Pratt) dresses like Indiana Jones, struts around like John Wayne, and communicates with raptors: a hybrid hero to match the film’s giant hybrid villain, which inevitably gets free of its compound and goes on a killing spree. There’s a human villain too, played by Vincent D’Onofrio, the park’s head of security as well as some kind of weapon’s manufacturer. He talks about sending trained dinosaurs to the Middle-East, which is both the stupidest thing I’ve ever heard and the best movie pitch ever.

Trevorrow does well enough with the action scenes, which are brutal, fast and satisfying. But everything between these scenes is marred by stock characters, woeful writing and sentimentality of the worst kind (Spielberg, I’m willing to bet, would never go so far as to include an extended scene with Owen comforting a dying Brontosaurus). At one point, the boys stumble upon a room from the original Jurassic Park, long abandoned and covered in weeds. They shine a light on the wall, which has a crude drawing of a dinosaur on it. It’s like a cave painting. In a film that’s sorely missing a little magic, that’s the one image I’d like to retain.

This review appeared in Mint.
Posted by a fan apart at 3:07 AM