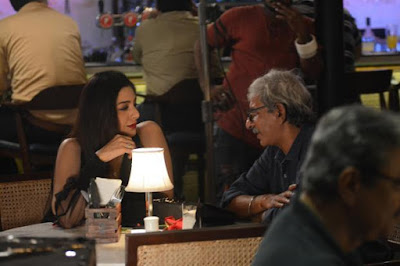 In Indian cinema and abroad, the smartly designed trailer is an endangered species, replaced by mini-movies with most of the plot and all the best lines. This might explain the ecstatic reactions that greeted the Andhadhun trailer when it released earlier this month. To use a term that now means something else entirely, it’s a teaser, an enticement to discover a story in cinemas rather than have it all laid out beforehand.

Sriram Raghavan’s film is about a blind pianist (Ayushmann Khurrana) who is involved in the aftermath of a violent crime by a mysterious woman (Tabu). The twist hinted at in the trailer is that he’s surprisingly aware of his surroundings for a visually impaired person. Andhadun appears to be a darkly humorous noir film—territory that Raghavan has made his own with films like Ek Hasina Thi, Johnny Gaddaar and Badlapur (the outlier is the spy thriller Agent Vinod). He spoke to Lounge about writing as a team and how a 44-day shoot took a whole year. Edited excerpts:

A blind pianist turns up in another of your films, during the ‘Raabta’ musical number/shootout in ‘Agent Vinod’.
She was one of the minor inspirations of this kind of character. Lots of people asked me then, how does she not know what’s going on, is she deaf also? I said, maybe, maybe not. But yes, another character who either can see, or not...

The trailer has echoes of Francois Truffaut’s ‘Shoot The Piano Player’: a pianist involved with two women and dragged into a crime, the melding of noir and comedy and gangster genres. Was it an influence?
Shoot The Piano Player is one of my favourite films, though apparently it failed very badly when it released. I discovered Truffaut once I joined the Film and Television Institute of India (FTII). But Shoot The Piano Player wasn’t available in the archives, so I saw it much later, once the DVD had come out.

There was one thing Truffaut had said after making The 400 Blows—something like, “This is an explosion of genres". Like what you said, comedy and drama and tragedy. I used to think, all Hindi movies are explosions of genres in that sense.

I think we’ve gotten overexplicit. For thrillers, it’s especially difficult to carve out a good trailer. When we were trying to do this one, I was watching a lot of trailers for movies like The Sixth Sense, to see what they were giving away. There was one that I saw—I used to show it to the team and say, watch and learn. It was a trailer of Psycho, just (Alfred) Hitchcock talking to the camera in that house and one shot of the movie. It’s almost a 6-minute trailer but it’s effective.

What gave you the initial idea for ‘Andhadhun’?
There’s a short film I’d seen in 2013 or 2014— a friend of mine sent it to me. This was before Badlapur even came into process. What I’ve done is nothing to do with that film, but it was my basic germ.

Me and this guy called Hemant Rao started spitballing on it. Then at some point I got into Badlapur, so our interactions became a little infrequent. Then he started his own movie. Once Badlapur got over, I had the gist of the story, but we hadn’t scripted it entirely. I was about to start this but then I read about Kaabil (a 2017 film in which Hrithik Roshan plays a blind man). It would be a bit crazy to have two movies about visually impaired people, so I stopped.

You had a number of writers on this project.
It was me and Arijit (Biswas) and Pooja (Ladha Surti) and a fresh boy, Yogesh Chandekar. It’s very organic. I figure out the basic story. Then Arijit and me will chat about it, he’ll have some ideas. Pooja is great as a sounding board. We just sit and discuss the possible movie. It’s over a few afternoons and evenings spread over three or four months—we’ve never tried sitting for 10 days and doing it in a go.

Do you all write dialogue?
Yeah. Arijit writes in English. I also think in English. But then you keep getting disappointed when you’re translating from English to Hindi. For the dramatic scenes, I told Arijit to write in Bengali, which is at least the Indian idiom. Most languages in India, you can get a sense of what’s being said from the way we speak it.

Pooja’s Hindi is much better than ours, so we make her write a version. Then the actors pitch in. What you see in my script may not be what’s in the film. Sometimes it’s a very scary thing, when I have to shoot in the morning and the scene’s not good enough, and it’s only me there, and there’s no signal to even call the others and say, think of a better line.

How long did the shoot take?
It was a 44-day shoot, but these 44 days happened over almost a year. My director of photography (K.U. Mohanan) is a busy guy, Tabu was doing Golmaal and suddenly Radhika (Apte) got a whole lot of international projects and Sacred Games. I had to see, can I get them for two days, for five days? And Ayushmann was doing Badhaai Ho, in which he didn’t have a beard. It was crazy. I began in June last year, and 17 July this year was my last day.

Were there any particular tonal inspirations?
One of the big conscious or subconscious inspirations is Fargo, both the series and the Coen brothers’ movie. It’s realistic and yet it’s bizarre.

Having Anil Dhawan, an actor from the 1970s, play Tabu’s husband is an unusual casting choice.
Until the final casting was done, we were tossing up names. One option was taking a character actor and modelling him as an old-style star, like Naseer (Naseeruddin Shah) in Dirty Picture. But the only thing was, if I did that and then wanted to have some fun with an old clip, it’ll look quite grotesque. Then this thought of let’s take an actual person arose. I knew (actor) Varun and (director) David Dhawan, and Anil is David’s older brother. I met him, and he loved the idea.
Posted by a fan apart at 11:20 PM