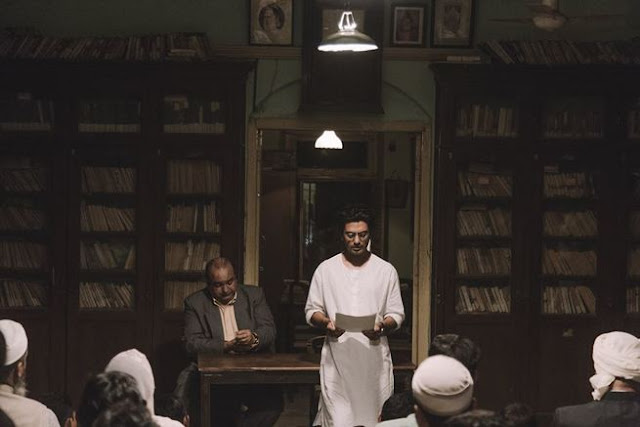 Like Rabindranath Tagore and Satyajit Ray, those other two giants of 20th century arts, Saadat Hasan Manto has become a 21st century cottage industry. Not a year goes by without a new Manto translation, story collection, film adaptation or stage production. And like Subhas Chandra Bose, like Bhagat Singh, Manto has come to assume an even greater significance in death than he did in life. He’s become a signifier of a certain type of worldview. To be a Manto adherent is to tacitly declare oneself the possessor of a sensibility both broadminded and unsparing.

The promotions surrounding Nandita Das’ film have fed both the cottage industry and the legend of Manto as liberal icon. The first look we got of Nawazuddin Siddiqui in character as Manto was a short film made by Das last year, In Defence of Freedom, in which the writer holds forth on obscenity and censorship. More recently, Siddiqui has appeared as Manto in a rap video ("Mantoiyat") with Raftaar – part of the original soundtrack, though it doesn’t play in the film – and a spoken word video ("Mere Kavi Dost") with poet Ramneek Singh. Publishing house Speaking Tiger, no doubt looking to make the most of Manto season, released a lively set of remembrances, Manto-Saheb: Friends and Enemies on the Great Maverick, last month.

Much of the conversation leading up to the film’s release has revolved around how relevant Manto is to these times – something that might have been said with equal conviction anytime in the last 60 years. Though there’s enough here for anyone who might want to draw parallels with present-day intolerance, and though the film’s ultimately a heroic portrait, it does at least try and consider the contradictions and flaws of this complex figure. We begin inside a Manto story, about an underage sex worker who spends the day with two wealthy clients. As it concludes, we see that its last lines are being read by Safia (Rasika Dugal), whose reaction is being monitored by her husband, Manto.

Through the film, we’ll see famous Manto stories being acted out. However, in some of the later dramatizations, writer-director Das makes a crucial adjustment. In one scene, Manto is shown walking down a street in Lahore, having moved there in 1948 from Mumbai. It’s a ghost town, full of refugees and survivors of Partition in various states of disrepair. He sees a man asking if anyone’s seen his daughter Sakina. We follow the stranger as he reaches her bedside in a makeshift hospital. At some point, depending on your familiarity with Manto, you’ll realise you’re watching his haunting short story “Khol Do”.

By removing the distance between Manto’s life and his work in this fashion, Das hints at how hopelessly interdependent the two were. Earlier in the film, Manto’s close friend, actor Shyam Chadha (Tahir Raj Bhasin), takes him to see a relative, who relates a harrowing story of violence. On the way back in the train, Manto starts weaving what they’ve heard into a story. Shyam protests, arguing that these are real people, not fodder for some magazine story. It’s easy for you to take someone’s grief and turn it into fiction, he alleges. “It’s not easy,” Manto says quietly. In this moment, it’s suggested that what Manto lacked wasn’t empathy but the tact to hide his unceasing search for subjects in the everyday.

Manto’s post-Partition career in Pakistan is well-chronicled, which is perhaps why the Bombay-set portions of the film are the most intriguing. We see him suffer the mangling of his words by the film industry and argue with Ismat Chughtai, Krishan Chander and other writers and poets over cups of tea in an Irani cafe. In one scene, he’s travelling in a car with film star Ashok Kumar. Manto is tense; Partition has been announced and, despite Kumar’s amusement, he dons a skullcap. The vehicle is stopped by a group of Muslim men, who recognise the actor and are delighted. It’s a revealing (and true) incident – Manto, with one foot in reality and the other in the world of the arts, could sense the danger in situations like these, something his more famous friend just couldn’t fathom.

Unlike other recent period films, Manto is mounted with taste and care. Rita Ghosh’s production design goes a long way toward creating a convincing Lahore (shot in Vaso, Gujarat) and Bombay of the 1940s and ‘50s. Kartik Vijay works wonders with natural light and muted shades. Sneha Khanwalkar’s “Nagri Nagri”, in its initial moments, not only sounds like it could have been recorded in the 1940s, but also apes the melody of “Tu Mera Chand Main Teri Chandni”, a song from the 1949 film Dillagi. This was an actual film starring Shyam – he’s shown taking an unsuccessful crack at the tune in one scene before Naushad tells him to go home. Years later, in Lahore, as Manto seemingly hallucinates and insists he can hear Shyam singing, “Nagri Nagri” plays on the soundtrack.

The flipside of all this control is that Manto feels strangely programmatic, moving a little too cleanly from one historical event to the other. As Manto and Ismat banter in a bookstore, a religious riot suddenly breaks out; the next scene is Manto and Safia looking from their window as the city celebrates independence. A couple of scenes later, Partition is announced; soon after, Manto leaves by ship for Lahore. Then it’s 1948, and the first scene in Lahore is Manto being told that Gandhi is dead. None of this is unimportant material, but there’s the feeling of events being ticked off a long list.

Siddiqui is typically charismatic, and although no other character apart from Manto is developed to any meaningful extent, there are several witty cameos, especially Rajshri Deshpande as Ismat Chughtai and Bhanu Uday as Ashok Kumar. Dugal does a fine job too, but Safia is never allowed much of a personality beyond being an encourager of her husband and an absorber of his complaints. Despite the alcoholism and the vanity and the neglect, this is an admiring portrait of an artist who threw himself into battles that are still being fought today. The irony of someone like Manto, destroyer of sacred cows, being held up as some sort of ideal would not have been lost on the man himself.

This review appeared in Mint.
Posted by a fan apart at 1:33 AM