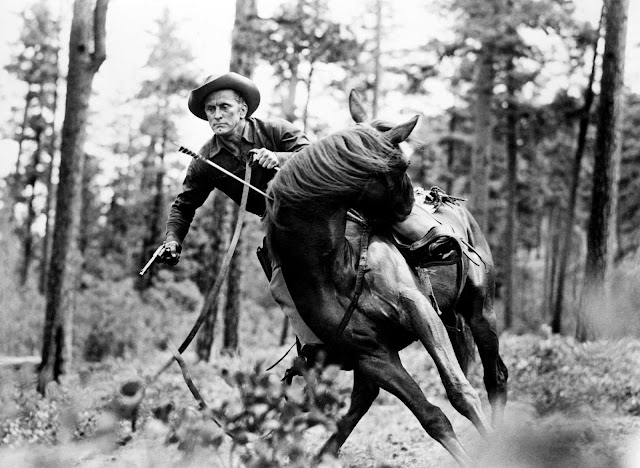 Two months ago, in an article for The Huffington Post, Kirk Douglas wrote, “My 100th birthday is exactly one month and one day after the next presidential election. I’d like to celebrate it by blowing out the candles on my cake, then whistling ‘Happy Days Are Here Again.’” One hopes that Douglas – a lifelong liberal – would have recovered from the US election result by the time 9 December comes around, and will allow himself a fond look back at what has been an extraordinary career.

He made his screen debut in 1946, opposite Barbara Stanwyck in The Strange Love of Martha Ivers, and never seemed to look back. Unlike established stars like Cary Grant and John Wayne, whose screen personae were fixed in the minds of the public, Douglas was tougher to slot: he was a boxer in Champion (1949); a cynical newspaperman in Ace in The Hole (1951); an archetypal Hollywood wheeler-dealer in The Bad and the Beautiful (1952); Vincent Van Gogh in Lust for Life (1956); an upright colonel in Paths of Glory (1957). Outspoken and wilful, he was instrumental in breaking the Hollywood blacklist: as co-producer of Spartacus (1960), he saw to it that Dalton Trumbo (who’d been writing for years under a pseudonym) got a screenwriting credit, which paved the way for other discarded Reds to return to the Hollywood mainstream.

Spartacus sealed his popular image as a rugged action star, but Douglas rarely gravitated towards un-ironic heroics in his films. As he noted in his autobiography, The Ragman’s Son, he portrayed more than his fair share of heavies, but his real talent lay in suggesting that even his protagonists were a few drinks and a bad breakup away from violent implosion or explosion. He could have easily built a career out of his singular glowers and sneers. Instead, he used his scenery-chewing like a smokescreen, the bluster barely able to hide the emotional nakedness.

As the man turns 100, we raise our glasses to Spartacus, to Chuck Tatum, and to these five scenes made indelible by Douglas’ presence: 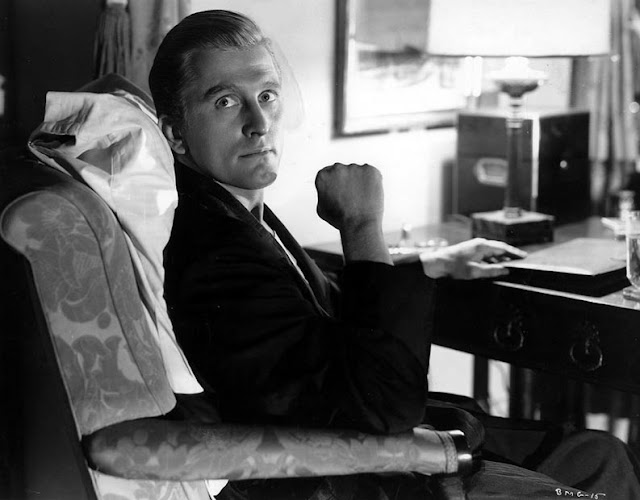 In Jacques Tourneur’s Out of the Past, Kirk Douglas was handed one of the most effective introductory scenes in the noir canon. By the time we lay eyes on Whit, 11 minutes in, he’s been established as a man not to be messed with – ‘a big op’, in the words of the Robert Mitchum’s doomy hero, former private detective Jeff. In flashback, we see the two of them meet for the first time. Whit hires Jeff to find his girlfriend, who shot him and made off with 400 thousand dollars.

Most actors – especially those acting in their second film, as Douglas was – would have played Whit as overtly menacing, and the scene would probably still have worked. Whether some instinct told Douglas to resist this, or whether it was Tourneur’s idea to have Whit be mild-voiced, even genial, is anyone’s guess. At any rate, from his first line – “Smoke a cigarette, Joe,” to a hyperventilating henchman – Douglas is a study in offhand cool, perhaps taking a cue from the Zen-like presence of Mitchum across the table. The only time he allows his face to darken is when he says “I won’t touch her” – a canny choice by the actor that tells us all we need to know about Whit. 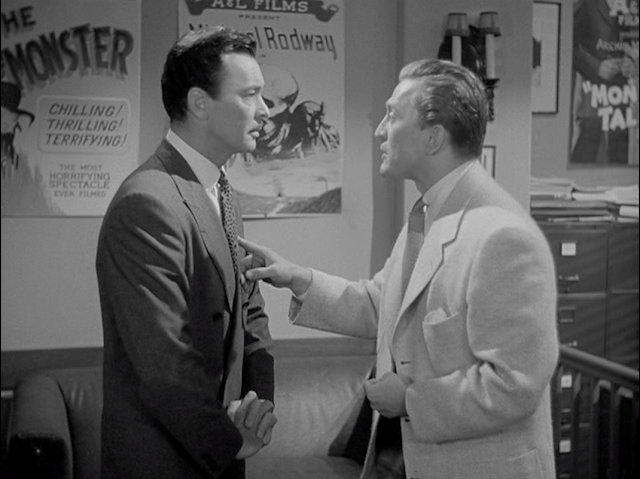 In the opening minutes of Vincente Minnelli’s The Bad and the Beautiful (1951), movie star Georgia Lorrison (Lana Turner), director Fred Amiel (Barry Sullivan) and screenwriter James Lee Bartlow (Dick Powell) all dodge calls from their once-collaborator, studio head Jonathan Shields (Kirk Douglas). When the three of them are brought together by a producer, we’re told, in a flashback that lasts most of the film, about their respective relationships with – and eventual break from – Shields.

A key scene in the film is the one in which the casually ruthlessness of Shields’ ambition is laid bare. Fred, his collaborator from the start, waits nervously outside a financier’s office while Shields applies for funding for their new movie. Suddenly, Shields bursts through the door, delighted – they have the million dollars they were looking for. He’s so excited, chattering about what they could do with the money, that he doesn’t notice his friend’s face darken when he lets it slip that Fred has been replaced by an established director.

As Fred protests, there’s an immediate change in Douglas’ demeanour; his face, animated a few seconds ago, becomes impassive. His voice, too, drops an octave as he says, “Fred, I’d rather hurt you now than kill you off forever.” In this moment, we feel both the burning ambition and cold calculation of Shields. It’s quite something to watch this scene and be reminded of Michael Douglas, Kirk’s son, deploying a similarly devastating poker-face years later in Wall Street.

One of the underappreciated aspects of Douglas’ screen-acting is how often he belied his rugged image and showed weakness – physical, emotional or spiritual – in his onscreen roles. He was drunk and intriguingly unsure in his debut, The Strange Loves of Martha Ivers, and equally drunk and emotionally turbulent four years later, in Michael Curtiz’s Young Man with a Horn. In the 1950 film, Douglas plays Rick Martin, a character based on real-life jazz cornetist Bix Beiderbecke. It’s an uneven film, beautifully photographed and scored but also shrill and puzzling if you can’t figure out that Rick’s wife, played by Lauren Bacall, is supposed to be gay (films at the time couldn’t explicitly say this, which makes Douglas and Bacall’s scenes together very strange).

At the end of the film, Rick is wandering the streets of New York. His wife has walked out on him, his mentor is dead, he’s flubbed a recording session and now he’s drunk and falling apart. In a black jacket and partially unbuttoned white shirt, Douglas walks around in a daze, bumping into passers-by, getting into a fight, buying a beat-up horn. It’s not what most would consider heavy-duty acting, but when I think of Douglas and the film, this is what I remember. It’s a reminder that, so often, what we think of as ‘performance’ is actually the sum total of lighting, camerawork, shot selection, music and a dozen other big and small decisions, almost none of which are in the hands of the actor.

As Jerry Goldsmith’s score sweetens into a wistful lilt, the woman hears the clip-clop of hooves, sets aside her cooking and hurriedly washes her hands. She turns around just as he enters. The look they share in that instant has their entire backstory: affection, compromise, regret, loneliness. “Hi,” he says, face creasing into a grin. “Hi,” she replies, with a hint of a smile. “Welcome home.”

The film is David Miller’s Lonely Are the Brave (1962), a modern-day Western in which Douglas plays an outlaw of sorts – not a criminal, just someone unsuited to the restrictions of modern life. The woman is his best friend’s wife; they were in love once, but it never worked out. It’s a simple scene – she makes him breakfast, he tells her that her husband is fine – but Douglas and Gena Rowlands play it with such feeling that you can feel the weight of the years. 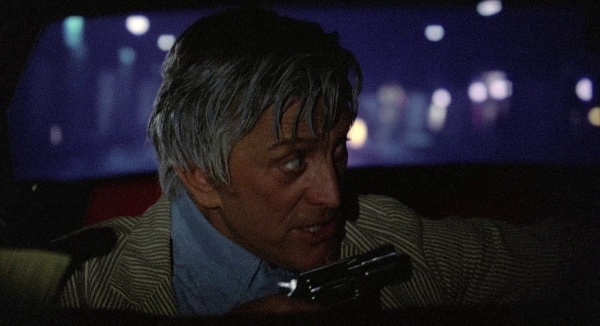 Along with George Miller’s The Man from Snowy River, The Fury represents the best of late-period Douglas. In this 1978 film by Brian De Palma, he plays Peter Sandza, an ex-CIA agent who survives an assassination attempt and resurfaces years later in search of his telekinetic son, who’s been kidnapped by a shadowy intelligence organisation. Pursued by his son’s captors, he takes two bumbling beat cops (one of whom is played, hilariously, by Dennis Franz, future NYPD Blue star) hostage and commandeers their vehicle. De Palma, master of the elaborate chase, wasn’t fond of cars, a possible reason why the sequence is played mostly for laughs.

De Palma gave impetus to several fledgling actors – John Travolta, Robert De Niro, Margot Kidder – in his early films, but this was the first time he worked with a huge star. And Douglas is very much the old-school pro in the film, and in this scene. He deadpans through most of it, which only serves to make the panic of his co-passengers more hilarious; his sideways glance when one of them says, belatedly, “Somebody’s after you, is that it?”, is a minor classic). Few actors over 60 would have consented to ending a big action sequence with their pants around their ankles. That Douglas does this without looking ridiculous is testament to his willingness to subvert his own virile image, and to his belief in his own star quality.

This piece appeared online in Mint On Sunday.
Posted by a fan apart at 7:47 AM

Email ThisBlogThis!Share to TwitterShare to FacebookShare to Pinterest
Labels: Kirk Douglas, Lonely Are the Brave, Out of the Past