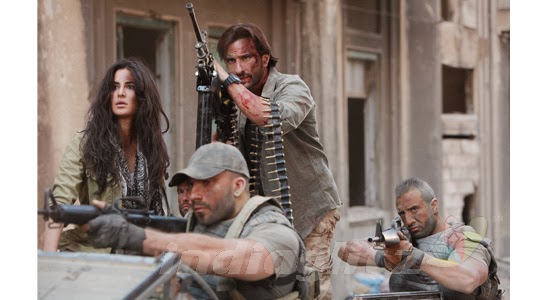 Whether you find yourself in a patriotic frenzy by the time Phantom ends will depend on where you stand on the idea of revenge—or, to be more specific, the idea of nations avenging themselves on each other. Whether you believe it was justified for the US government to send forces to Pakistan to kill Osama Bin Laden. Whether you think their doing so gives India the licence to do the same. If scenarios such as these sit well with you, you’ll find a lot to like in Kabir Khan’s latest film, an adaptation of S. Hussain Zaidi’s Mumbai Avengers.

Zaidi’s novel, published earlier this year, is about a team of five Indian agents assigned to hunt down and kill the perpetrators of the 26/11 attacks. The film boils that team down to one person—a shadowy ex-armyman named Daniyal Khan (Saif Ali Khan). Khan is tapped for this mission by Research and Analysis Wing, who have been expressly forbidden by the government to mount any covert operations, but go ahead with one anyway. Wary, but also eager for redemption—he was dismissed from the army on charges of desertion—Khan takes it on. Thus begin the assassinations, first in London, then Chicago, Syria and Pakistan. Along the way, Daniyal acquires a helper in Nawaz Mistry (Katrina Kaif), an ex-RAW agent who’s with a private security firm, but only until her latent patriotism kicks in.

The first murder—by way of a lighted stove—has a setup that’s reminiscent of Munich, which led me to wonder whether Phantom might also turn out to be a meditation on the double-edged sword that is state-sponsored vengeance, as Steven Spielberg’s film was. This was not to be: Daniyal doesn’t seem in the least affected by all the killing at close quarters that he’s doing, and the film does no introspecting either. This is Baby by way of Zero Dark Thirty, pushing in favour of vigilante solutions, presenting acts of revenge as both just and justified.

Still, when Phantom is on song, things fall into place very satisfyingly. Kabir Khan and his co-writers Kausar Munir and Parveez Sheikh build the assassinations carefully, from the ground up. The frequent cross-cutting between events is handled very well by editor Aarif Sheikh. The unhurried build-up to the parallel murders in Lahore is especially impressive for the number of the moving parts it brings into play and then deploys. But Khan can’t quite pull off the big action set-pieces: the tension built up in Lahore is squandered with a Rambo-like finish, while the gunfight in Syria is confusingly staged and, despite the best efforts of cinematographer Aseem Mishra, a dusty mess.

As Daniyal, Saif Ali Khan is lethal and dour—impressive as a killing machine but impossible to feel anything for. Kaif tries really, really hard, and it seems fair to leave it at that. (Why anyone thought she’d do justice to a scene in which she has to pretend to be pregnant is mystifying.) There are talented actors on the sidelines— Mohammed Zeeshan Ayubb as the RAW employee who comes up with the plan, Ashwath Bhatt and Denzil Smith as ISI agents—with little to do, though there’s an affecting cameo by the person playing the Pakistani café owner who helps Daniyal and Nawaz.

In an unusual turn of events, two Kabir Khan films have released in theatres in the last month and a half, each with contrasting visions of Pakistan and cross-border relations. Phantom would seem to be the one that hews closer to real life—after all, it has David Coleman Headley and Hafiz Saeed (changed to Harris Saeed) and dozens of references to actual events. But it’s important to recognise that they’re both fantasies: of good vibes and cooperation in Bajrangi Bhaijaan’s case, and of bad vibes and old-fashioned vengeance in Phantom’s. And it’s quite possible that a lot of the people who cheered for Indo-Pak goodwill in Bajrangi will end up applauding the chest-beating, flag-waving Phantom.

This review appeared in Mint.
Posted by a fan apart at 5:14 AM