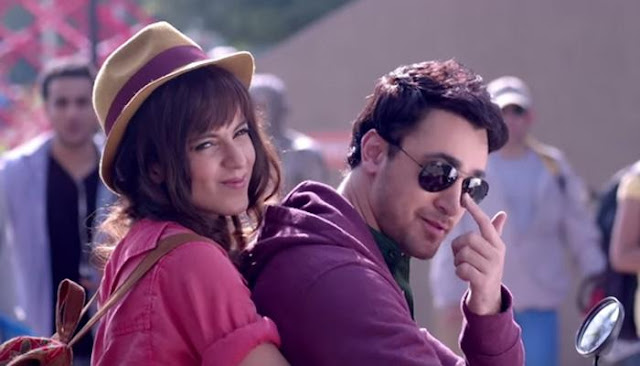 If Katti Batti didn’t go spectacularly off the rails, the worst thing one could say about it would be that it bears an unacknowledged debt to Marc Webb’s (500) Days Of Summer. The trailer had pretty much prepared people for this, but director Nikhil Advani has since stated in interviews that his film is not a version of the winsome 2009 romcom starring Zooey Deschanel and Joseph Gordon-Levitt. I suppose it’s possible that two people could independently come up with a film about a diffident guy who falls for a tempestuous girl, realizes she isn’t in it for the long haul, breaks up with her, goes into a deep depression and is counselled by a mouthy younger sister. It’s a little unlikely, though.

Even if you can’t shake off the memory of Webb’s film, the first 45 minutes or so are fluent and fun. Advani works up a blithe, brisk rhythm as he introduces Madhav (Imran Khan) and Payal (Kangana Ranaut)—both a little old now to pass off as college kids—and has them fall in love in a few quick scenes. There are little flourishes one might not expect—a song blending live action and stop motion, a subverted “hero” moment perfectly tailored to Khan’s apologetic star persona. We go back and forth in time, from Madhav’s recollections of their romantic history to his abject, lovelorn present.

For a while, the film seems all too willing to place the blame for the relationship’s demise on Payal, while ignoring Madhav’s whininess and lack of conviction (Devdas, patron saint of self-debasing Indian male lovers, is rightly referenced). Later, it does try to redress the balance, but this is still very much a male-perspective film. Payal remains a cipher, because we’re only seeing her through Madhav’s fervent eyes. That, of course, is the film-maker’s prerogative, but there are other signs that the film’s sexual politics may be skewed—the most flagrant of which is when Madhav’s friend sends pictures of him in bed with a girl to Payal’s new fiancé, to prove some point which eludes me.

Just when Madhav is in danger of wearing out audience sympathy with his weepy persistence, Advani pulls out what he probably thinks is an ace. The film suddenly changes tack, but none of it makes sense—tonally, logically. It’s almost like the director decided to graft one of his popular early films on to the indie film everyone knew he was adapting. I won’t spell it out, but considering where it ends up, the film could really be called “500 Days Of Bummer”.

Because there’s no effort made to develop any characters besides Madhav and (to a lesser extent) Payal, there aren’t any supporting performances to speak of. Khan is fine in the courting scenes—offhand charm comes easily to him—but isn’t a theatrical enough performer to make Madhav’s wallowing very interesting. Ranaut, lacking the sort of definition she’s had in her last few roles, is rarely as enigmatic as the film needs her to be, though she finds her poise in the closing minutes. After Queen, Revolver Rani and Tanu Weds Manu Returns, it’s the first film she’s done which isn’t really interested in her, and it shows.

This review appeared in Mint.
Posted by a fan apart at 12:26 AM