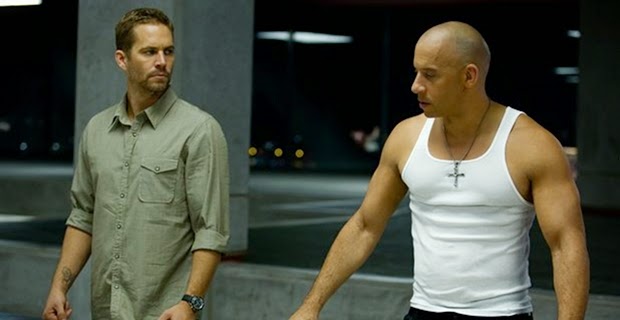 Paul Walker died during the filming of Furious 7. Along with Vin Diesel, he was the face of the franchise, appearing in six of the seven films. Walker was an unusual action star, not a bulldozer like Dwayne Johnson or grumpily lethal like Liam Neeson. Even in a series as turbo-charged as this, his screen persona was likeable and modest. His passing has a visible effect on this movie, which alternates outlandish action set-pieces with surprisingly emotional scenes that’ll likely confuse viewers who haven’t watched the previous films and felt a kinship to Walker’s character Brian O'Conner.

Just in case this sounds a little depressing, let me try and describe the protracted silliness that happens some 40 minutes into the film. For reasons that are entirely unimportant, the old gang – Brian (Paul Walker), Dominic (Vin Diesel), Letty (Michelle Rodriguez), Roman (Tyrese Gibson) and Tej (the rapper Ludacris) – have been tasked with retrieving cutting-edge surveillance technology from a terrorist. What they do next is so impossibly stupid that it might end up being hailed as a witty deconstruction of the action genre a couple of decades down the line. To put it plainly: they drive their cars off a plane, parachute down and land on a mountain road. The sequence that follows – in which they’re joined by Jason Statham, new to the franchise as bad guy Deckard Shaw – lasts about 20 minutes and serves as a vigorous riposte to outdated concepts like gravity and common sense. It’s all terribly stupid and terribly fun.

Does it really matter that Shaw wants revenge for his brother Owen, the villain of the last movie, and therefore kills Fast and Furious alumnus Han, puts DSS agent Hobbs (Dwayne Johnson) in hospital, and hunts the gang from Los Angeles to Abu Dhabi? Any fan of the series will tell you it doesn't. What’s important is Vin Diesel being able to growl “I’m a Corona man” when Kurt Russell’s government agent offers him a Belgian beer. It’s important that we get to see what a fistfight between Johnson and Statham looks like. It’s important that our imaginations are allowed to expand to the point that when an ambulance takes out a drone (a collision of Obama’s domestic and foreign policy, if you’re reading into things) it makes perfect sense.

At its most basic, a Fast and Furious movie is as weird and contagious as – and more large-hearted than – a Top Gear episode. It’s about driving fast and wrecking beautiful cars, but it’s also about comfort and familiarity. It’s nice to know that Vin Diesel can drive off a cliff, or jump from one skyscraper to another, without sustaining any lasting physical damage. And it’s nice to see that after giving Walker a moving send-off, the last scene teases the idea of a sequel. Walker made his name with this franchise, and it’s likely that he’d have wanted his fast-driving family to go on living their lives the way they’re used to.

This review appeared in Mint.
Posted by a fan apart at 4:52 AM