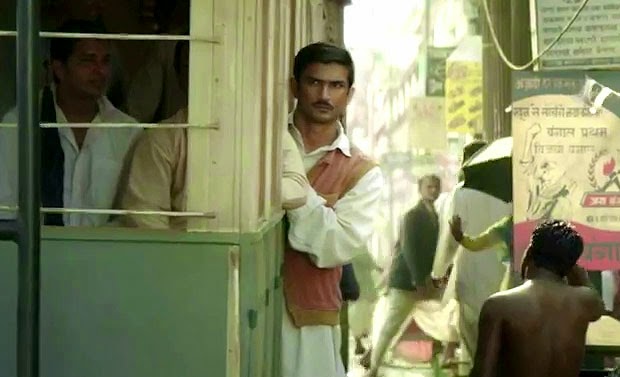 One of the neater tricks Dibakar Banerjee pulls off in his new film is in getting characters to repeatedly say his protagonist’s name out loud. It‘s true that both “Byomkesh” and “Bakshy” roll off the tongue easily and can be easily attached to “babu”, the natural Bengali appellation. But there’s more to it than that. I think the film tries to make us aware that Byomkesh Bakshy is someone to be reckoned with—a name that will mean something in future.

The idea that fame, while predestined, is still some way off is key, for Detective Byomkesh Bakshy! isn't concerned with the finished article. The film belongs to that most 21st century of genres: the origin story. When we first meet Byomkesh, he’s an embryo version of the sleuth we know from Sharadindu Bandyopadhyay’s books and the TV series with Rajit Kapur. Cannily played by Sushant Singh Rajput, he’s gifted but visibly overconfident, almost bubbling over with eagerness to demonstrate his skills, and suffering as a result. He makes mistakes, throws up when he sees a dead body, gets slapped, rejected, seduced, stumped. Yet he has this unerring instinct for the revealing lie, the promising yarn.

Banerjee might be said to possess the same instinct. No other Indian director of late has moved with such restlessness between genres and themes. Khosla Ka Ghosla! was a middle-of-the-road comedy; Oye Lucky! Lucky Oye!, an acid dissection of social climbing in class-conscious Delhi; Love, Sex Aur Dhokha, a defiantly un-pretty film about a society that is increasingly under surveillance; Shanghai, a political thriller in the vein of Z. It’s pointless to say that something looks or sounds like a Banerjee film because he’s constantly altering our perceptions of what this might be. There are scenes in Detective Byomkesh Bakshy! that could only have come from him. Others may as well have been directed by Takeshi Kitano.

Banerjee and his regular co-writer Urmi Juvekar have primarily adapted Bandyopadhyay’s Satyanweshi, the story in which Byomkesh meets his sidekick Ajit (Anand Tiwari) and solves his first case. Ajit’s father has disappeared, and Byomkesh believes something is up. And so he tugs at strings, watching some hold fast and others unravel. Soon, he’s sorting through the secrets and lies of a politician, his son, daughter and mistress, deciphering the cryptic pronouncements of his landlord (played entertainingly by Neeraj Kabi) and dodging the British chief of police and one spectral Yang Guang.

One of the delights of Banerjee’s films is his ability to conjure up settings that explain characters and their motivations without anyone saying a word. Here, working with production designer Vandana Kataria, he offers a detailed recreation of Calcutta circa 1943. Unlike the genteel depictions of the city one usually sees in period films, this Calcutta has a rude energy: Junkies and cabaret singers rub shoulders with pukka sahibs in the crowded streets, and air-raid sirens sound every night. Even the film posters hint at barely suppressed desires: Alfred Hitchcock’s Shadow Of A Doubt, about a niece’s infatuation with her killer uncle, and Howard Hughes’ The Outlaw, a film notable mainly for its preoccupation with Jane Russell’s bosom.

The production design isn’t the only reason why Detective Byomkesh Bakshy! feels like a very modern period film. There’s the unexpectedly flashy noir cinematography, a deviation from the more realistic work Banerjee and director of photography Nikos Andritsakis have done in the past; the selective use of freeze-frame flashbacks (a device borrowed from the TV series Sherlock); the curated (as opposed to composed) soundtrack that mixes rap, metal, gypsy ballads and thumping swing. Banerjee and Juvekar keep the Hindi dialogue largely devoid of frills; the flourishes are reserved for the multiple, often outlandish, plot twists. This is the first time these two have worked on an out-and-out genre film. You can see their glee reflected in Rajput’s face, which lights up every time he’s about to explain one of his deductions.

There are aspects that don’t work as well as one might have hoped. Other than Byomkesh and Ajit, the characters are sketched rather than fleshed out (I’d have loved a few more scenes establishing Mark Bennington’s disdainful police chief). With due respect to Swastika Mukherjee, who plays the singer Anguri Devi, and Divya Menon, as the politician’s daughter Satyawati, the noir convention of female characters being the smartest people in the room doesn’t hold good here. And the final unmasking and its fallout raises as many questions as it answers. But these are small blips in what is an immensely pleasurable viewing experience. “Why don’t we middle-class people do anything for our country?” Byomkesh asks Ajit at one point. “We’re busy watching movies,” comes the reply. That’s Detective Byomkesh Bakshy! in a nutshell: suspended between duty and desire, reality and intuition, ultimately choosing movies over real life.

Addendum: In the two days since its release, Byomkesh seems to gotten largely tepid reviews, with many critics pointing out the thinness of the plot. Instead of trying to defend the film on this count, I'd like to point to a long tradition (admittedly, one that exists outside India) of detective films whose plots are borderline ridiculous and in which mood is everything. It includes, among others, films like The Big Sleep, The Long Goodbye, The Big Lebowski and Inherent Vice. I think Byomkesh is a better fit with films like these than ones that are better plotted but are less evocative.
Posted by a fan apart at 8:22 AM