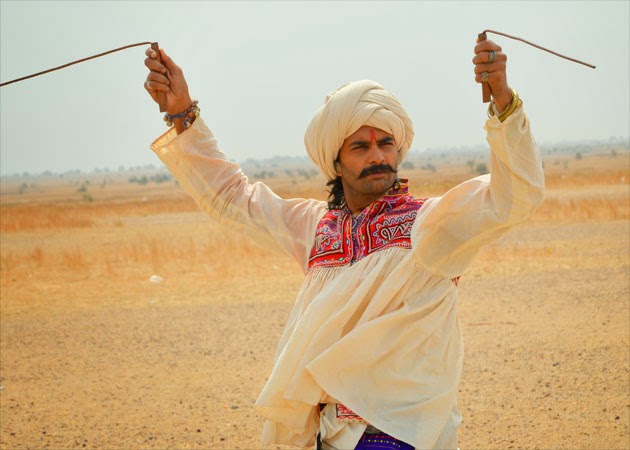 Just before Jal got underway, a blurb from a Hollywood Reporter review flashed onscreen. “A breathtakingly photographed tragedy of Shakespearean proportions,” it read. This is hyperbole of Shakespearean proportions, but over the next two hours, our thoughts did turn to the Bard – specifically to slings and arrows, mentally aimed at screenwriter Rakesh Mishra, and to the quality of mercy, dropping like the gentle rain on co-writer and director Girish Malik.

That Jal is overheated is no surprise: it’s set in the salt-encrusted desert of the Rann of Kutch. Naturally, water is an immensely valuable commodity here – something the film never fails to remind us of every five minutes. It’s so valuable, in fact, that you can make a living, as Jal’s protagonist Bakka (Purab Kohli) does, as a water-diviner. Bakka’s success rate is middling: a result, perhaps, of his rather hopeful modus operandi; he twirls a couple of rods, puts his ear to the ground and spends the next couple of days digging and reassuring sceptical villagers.

Water divining is an actual profession in desert regions of India, and Jal might have done well to explore the trade in some depth. Instead, the film wanders off into a strange parallel plot involving a Russian ornithologist, Kim (Saidah Jules), who’s trying to save the migratory flamingo population, dying due to the brackish water. She enlists Bakka, who successfully points the giant drills she’s hired to the right areas and earns the goodwill of his temperamental but water-starved village. But his moment in the sun is short-lived: Bakka’s in love with a girl from an enemy village, and if Ram-Leela taught us anything, it’s that residents of Kutch take their Romeo and Juliet posturing seriously. Soon, there’s a murder, a pregnancy, a sandstorm, an excommunication, a near-rape and an actual rape.

In recent interviews, Malik has insisted that Jal isn’t an art film. He’s right about that. From the title down, the film goes out of its way to be literal. Twelve songs on the soundtrack reference water or the lack of it; one particular piece of background music goes “jal jal jal jal jal jal”. There’s hardly a single important piece of information that isn’t tossed back and forth between characters and verbalised in different ways, so that the audience isn’t left in the dark. Perfectly simple bits of information are further simplified (my favourite: “We’ve located two spots. This is spot one and this is spot two.”) And everything is blown out of proportion – Kim can’t just be a visiting conservationist, she has to have gone to “some of the best colleges in Europe”. Similarly, the village males can’t see her as another pretty white-skinned girl; they have to imagine she’s there to shoot a blue film.

Purab Kohli, in a rare lead role, tries hard to match the film’s conception of Bakka as a randy, preternaturally confident water god. Casting the good-natured Kohli as a virile charmer is a bold move, but he’s too easy-going an actor to get the audience worked up. (It might have been interesting if he’d dropped hints that Bakka is making it up as he goes along, like Shreyas Talpade did in Dor.) Kirti Kulhari brings some fire to her Juliet role, but has little to do in the second half besides look to her lover for solutions. Saidah Jules gets all the worst lines – “Take care of my birds, they’re like babies” are her last words – though it’s debatable whether better writing would have helped her performance.

As Ram-Leela and The Good Road have recently shown, there are few landscapes in this country as photogenic as the Kutch desert. Cinematographer Sunita Radia goes somewhat overboard – zooming over salt deposits, panning around camels – but at least we’re given something pretty to look at as the storyline becomes progressively sillier. Malik deserves some points for ambition (this is his directorial debut), but there’s no denying that Jal takes an interesting premise and runs it comprehensively into the ground. After about an hour, we were begging for closure, but the shadow of an ending we saw was only a mirage.

This review appeared in Time Out Delhi.
Posted by a fan apart at 11:37 PM