“All things equal, a bad message film is better than a bad entertainer.” Among the many unwritten rules governing movies in this country, this is the most unfortunate. It is this rule that’ll save Satyagraha from being called the worst film of 2013. Yet, in more ways than I care to recall, that is exactly what it is.

Like his last two films, Aarakshan and Chakravyuh, Prakash Jha’s latest has been snatched from the headlines, dressed up, dumbed down and served to the public without comment or insight. Satyagraha revisits the anti-corruption protests that shook, albeit briefly, the capital in 2011. Amitabh Bachchan plays the Anna Hazare stand-in, a schoolteacher and activist called Dwarka Anand, whose thwarted efforts to retrieve the compensation money promised to him by a scheming minister (Manoj Bajpayee) after his son’s death soon morphs into a public crusade against corruption. His painfully loyal followers include his dead son’s widow (Amrita Rao) and friend (Ajay Devgn), a reporter, Yasmin (Kareena Kapoor Khan), and a local tough, Arjun (Arjun Rampal).

You’d think that with the benefit of hindsight, Jha and his co-writers Anjum Rajabali and Rutvik Oza might have ventured a few educated guesses about the inner workings of the anti-corruption movement. Yet, all we get is a recreation – a trite, simplistic version of a story everybody already knows. Maybe Jha thought that the very sight of hunger strikes and lathi charges would be enough to win over the audience. But like Raanjhanaa before it this year, Satyagraha ends up looking like a parody of the real-life agitations it so solemnly restages. 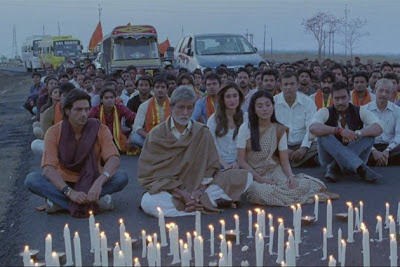 The incongruities pile up faster than you can count. Yasmin is the only big-time reporter I know who’d pass on an interview with a prime minister to go cover a story about a schoolteacher rotting in some small-town jail. Devgn’s Manav starts the film as a rule-bending phone company CEO, but soon proves he’s just another whore with a heart of gold. To top it all, the film contrives to have Dwarka, in a weakened state from his hunger strike and being watched by thousands of people, suddenly go missing.

A few good performances would have gone a long way – as they did in Jha’s Raajneeti – but there are none to be had. Bachchan, repeating his cantankerous old man act from Aarakshan, manages to avoid both embarrassment and impact. The same cannot be said for Devgn, whose acting abilities have deteriorated alarmingly since the days of Zakhm and Company. Kapoor, Rampal and Rao come and go, as cricket commentators like to say, without troubling the scorers. Only Bajpayee manages to have some fun with his hissing, bandgala-wearing villain.

Jha has become the Indian Stanley Kramer, seemingly unable to resist the higher calling of the message film. At least the director of Guess Who’s Coming to Dinner and Inherit the Wind made It’s a Mad, Mad, Mad, Mad World. Is there a silly, logic-defying comedy in Jha as well? Or has he already made one with Satyagraha?

This review appeared in Time Out.
Posted by a fan apart at 11:18 PM