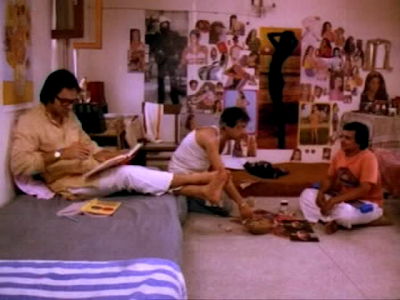 Those who expected Sai Paranjpye’s second film to be anything like her first, a sensitive romance set in a school for the blind, must have been surprised. Her 1981 follow-up to the National Award-winning Sparsh was a slapstick comedy that amiably parodied consumerism, slackerism and the Bollywood mainstream. Chashme Buddoor was released exactly 30 years ago, and, like its more political ’80s cousin Jaane Bhi Do Yaaron, shows no signs of dimming popularity.

The story is slight. Three roommates – Siddharth (Farooque Shaikh), Omi (Rakesh Bedi) and Jomo (Ravi Baswani) – fall for Chamko washing powder salesgirl Neha (Deepti Naval). Skirt-chasers Omi and Jomo are dispatched almost as soon as they enter the field, but the studious Siddharth makes more of an impression. Soon he’s contemplating asking her father, who’s also his boss, for her hand in marriage. But there’s still the matter of a kidnapping, a fight scene and a moment of doubt – none of which are meant to be taken in the least seriously. How could they be, in a film where the end credits substitute “Action Director” with the straightforward “Maramari”?

For all its slapstick clowning, Chashme Buddoor also opens a window to everyday life in the ’80s, complete with Campa Cola ads and bikes that refuse to start no matter how much you kick them. Viewers familiar with Delhi will have fun identifying landmarks like Talkatora Gardens, where Shaikh and Naval have their first date, and Tughlaqabad Fort, desolate enough at the time to make a convincing robber’s den. It’s also fascinating how, contrary to the way we’re encouraged to remember the decade, everyone in the film is very brand-conscious. Bedi wears a fake Adidas t-shirt, and Baswani changes his cigarette brand as soon as he comes into money. This pairing of individual and brand reaches its apogee in Naval’s character, initially identified as Miss Chamko on the basis of her sales pitch.

A key factor that separates Chashme Buddoor from other comedies is its depth of comic detail. Several brief, sublime gags unfold on second viewing, like the hollowed-out coconut that serves as an ashtray; a romantic song sequence on a boat that’s rescued from cliché by the cross-cutting between the couple and a herd of water buffaloes; “Maafi” being pronounced, ’30s style, as “maufi”; the camera zooming in after a character puts his hands to his eyes like a pair of binoculars; the line “kali ghodi pe gora saiyya chamake” that accompanies a fair-skinned Shaikh riding in on a black motorcycle.

Baswani, debuting here, and Bedi, just three films old, work hard for their laughs but are upstaged by Shaikh’s appealing reticence and the jovial shtick of Saeed Jaffrey as Lallan Mian, their paan and cigarette supplier. Naval walks away with the movie; she’s pretty enough for each of the three to fall in love with at first sight, and grounded enough not to let this go to her head. Paranjpye has directed several features since then, and while some of these have been critical successes (Katha, Disha), it is Chashme Buddoor that has proved her most enduring, and endearing, work to date.
Posted by a fan apart at 9:30 AM