Salaam Bombay: Takin’ it to the streets 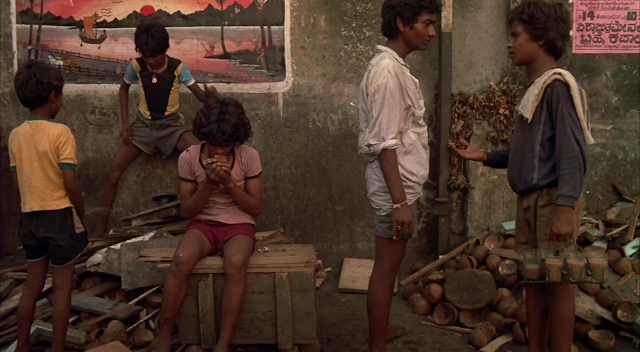 I spoke to Mira Nair just before the re-release of Salaam Bombay! in theatres. A slightly truncated version appeared in print. This is the complete interview.

During the making of Salaam Bombay!, director Mira Nair gave her cast and crew T-shirts that read “No guts no glory. 52 days 52 locations. What problem? No Problem”. The glory, of course, was to come. The film debuted at the 1988 Cannes Film Festival, where it won the Golden Camera for best first feature. It received Academy Award, Golden Globe and César nominations, and won a National Award for Best Film in Hindi. In the years since its release, it has become a touchstone for Indian and World Cinema directors. Subsequent Bombay films like Satya and That Girl in Yellow Boots are in its debt, as are international productions like Slumdog Millionaire and City of God.

Yet it’s what went into the making of the film – the problems that the T-shirts brushed aside – that made Salaam Bombay!’s success such an improbable Cinderella story. For starters, almost everyone involved was at the beginning of their feature film career. Nair, a documentary maker, had never directed a feature before; screenwriter Sooni Taraporevala, her classmate from Harvard, had never one; cinematographer Sandi Sissel had never shot one. Nana Patekar wasn’t well-known in those days, and Raghubir Yadav was only one film old. Rawest of all were the street kids whom Nair insisted on casting, and whose performances became the film’s beating heart.

Nair combined several of her passions in her debut film. You can see the influence of Leacock and Pennebaker, masters of cinéma vérité; of Badal Sircar, who coached her in political theatre; and of Barry John, whose Theatre Action Group she was a member of. John helped her conduct a workshop with the children prior to the shoot; they started with 129 kids, and whittled the number down to 19. The shoot, which began during Ganesh Chaturthi celebrations, was chaotic, with Nair’s “no studios” policy necessitating a fair bit of guerilla-style filming. Money kept running out, and Nair found herself shooting during the day and talking to financiers at night. Yet, somehow, the film made it from Bombay’s crowded streets to Paris for the post-production.

Seen today, the film, which looks at the lives of Bombay street kids through the eyes of a tea-seller called Krishna (Shafiq Syed), still feels fresh and vital. Contemporary audiences have a rare chance to make up their own minds on the film’s 25th anniversary, as PVR is releasing a digitally restored version in theatres. We met Nair at her Vasant Vihar home and, under the gaze of a Vivan Sunderam portrait that looks remarkably like the brothel madam played by Shaukat Azmi in the film, asked her about the guts, the glory and the long shadow of Salaam Bombay!.

You had made four documentaries before Salaam Bombay!. What made you decide to move to features?
I wasn’t one of those people who were using documentaries as a stepping stone to features. I never studied features. What I really wanted to be was a documentary filmmaker. The frustration was not finding an audience, and I wanted one.

I liked cinéma vérité – pure documentaries, in a sense. We went, lived with people, and turned the camera on whenever things became interesting. Often, I never knew what the story was until I went into the editing room. But once I was there, I wished I had more control – over a gesture, where the light fell. So I found myself, organically, wanting those things that don’t come from hit-and-run documentaries. That was the second thing. The first was: kaun dekhega mera picture? They don’t believe this now, but even my family didn’t see my documentaries. Where could you go to see them in those days? It was like talking into a void.

Was there a specific point of origin for the story?
I remember two images. I was living in a flat in Antop Hill with these dancers whose lives I was documenting in [the 1985 documentary] India Cabaret. This “chaipau” [what Krishna is called by everyone in Salaam Bombay!] would come and wake these dancers up every morning with cups of tea. They’d tell him “Naacho” from their beds: a total role reversal. But more than that, it was being in this crazy traffic jam, and this gnarled kind of hand holding onto my taxi window. I looked down, and there was this kid who was just a head and torso and arms, on a wooden platform. He held on as the light turned green, and as the taxi picked up speed he let go and, in the middle of traffic, did this pirouette like there was an audience. It was startling to see a child who literally had nothing performing for himself.

You conducted a workshop for the kids with Barry John before the shoot.
We brought him in from Delhi. He had such a great facility – with children and with drama.

We had the fourth draft of the screenplay by that time, but we didn’t bring that in until the fourth week of the workshop. We were finding out what these kids were, what they spoke about. In the sixth and last week, we brought in the camera, because I wanted them to feel the pressure.

Aneeta, Irrfan and Raghubir were part of the workshop, but I kept Nana distant because I wanted that tension [between him and the kids]. It became pretty clear during that time that Shafiq would be chaipau.

You also used cartoons to help the kids with the screenplay.
Well, that was done mainly for continuity. And of course, they couldn’t read. Dilnaz, the assistant director, would make these stick figure-like cartoons, just to give them an idea of what will happen. We only had to use those in the workshop, though, because by the time we were shooting, the kids knew it backwards.

The film was shot entirely on location. Not many Indian films did that then.
We didn’t even know it was unprecedented for its time. I didn’t know any other way. It’s taken me years to go inside a studio. What’s crazy was that we didn’t have all our locations mapped out. We found locations in the middle of the shoot.

We were always on the lookout for rains, because we had no money for a machine. For this one shot, we’d staked out this particular spot in a brothel. When the time came to shoot the scene, we literally had to climb over three pairs of intertwined legs!

Nana Patekar wasn’t your original choice for the role of Baba.
I’d always worshipped Naseeruddin Shah. I’ll never forget seeing him on stage in The Zoo Story at the American Center when I was 17 years old. I always wanted him to play Baba. So I went to him, knocked on his door, bit my nails. He called the next day, and said he couldn’t do it. He said, “I just don’t like the guy”. I think it was him who told me to go and see Marathi theatre. So I did. When I saw Nana in Purush, that was it.

Were there any filmic inspirations for Salaam Bombay!?
Bunuel’s Los Olvidados was an early eye-opener, but the film that gave me the courage to actually make Salaam Bombay was Héctor Babenco’s Pixote, a fantastic Brazilian film on street children. I happened to be at the New Directors/New Films festival [in New York] in 1986 when I was plotting the budget of Salaam Bombay. Babenco was there that night, and he spoke after the film. I was just blown away. I remember coming out thinking, if he can do it, I think I can do it.

Though you came from a vérité background, there isn’t much handheld camera in this.
I didn’t see it as purely handheld, because I wanted a really photographic quality. I’ve always being inspired by photographs. I also didn’t want that overly jagged thing – I wanted a stately film, but full of life.

NFDC was one of the producers. What were they like to work with?
It’s very different now, but NFDC then was a tyrannical place. They used to summon me from shooting, and I’d go sit there. Sometimes there’d also be Mani Kaul and Kumar Shahani, the three of us sitting there like lulloos as someone would tell us ‘Aapne mineral water ka receipt nahin diya’.

The post-production happened in France. How come?
The budget we’d worked out was 860,000 dollars. We only had 450,000 when we started I decided to make a very beautiful film, with 35mm and the whole nine yards, but that meant I had no money to spend on post-production. I would shoot all day, and at night I would raise money on the phone with Europe and America.

I had a friend, a filmmaker called Gabriel Auer, in France. He came in the sixth week of shooting to Bombay. He saw what we were doing, and raised money for the remaining 50 per cent. The only thing was, it was French money, and it had to be spent in France. That’s why the post-production was in France. I did the cutting in New York, but I had to come there for the mix and the post and the negatives.

What was Cannes like?
Gabriel [Auer] suggested that we offer it only to Director’s Fortnight, the alternative to the main competition. The premiere took place in the old Palais, home of the Cannes festival before the new Palais was made. That was the year the Palais was going to be pulled down, and Salaam Bombay was the closing film in that building. That night, they called all the directors who’d ever had their films shown there.  There were 30 directors on stage, from Manoel de Oliveira to Wim Wenders. And in the end they said “And the youngest baby of the Cannes set…”, because I was 30 at the time. After the film was over, there was a 20-minute ovation. The response was astounding.

Do you think Salaam Bombay! helped foster a certain kind of gritty Bombay film?
I don’t want to say it started with me. But there was definitely a thrill to see films after Salaam Bombay! getting life back on the street, because that territory’s so rich. And of course, when you see the same shot, you know it’s the same shot. For example, Satya has the same scene as the one where Chillum is dead and the kids are taking his body around the corner. I used to pull Ramu’s leg about that.

How have other directors reacted to the film over the years?
I remember being president of the jury of the African Film Festival in Milan in 1995. One day when I went back to the hotel, I met my co-president [Iranian filmmaker] Jafar Panahi. He’s a taciturn kind of guy, and he just kissed my hand, lay down and said “Salaam Bombay”.

How did this re-release come about?
We made it happen, to be honest. This is the 25th year of Salaam Bombay!. My son is 21 and a lot of children in our family are around that age, and most of them haven’t seen the film on the big screen. Because PVR was doing such a comprehensive release with The Reluctant Fundamentalist, I approached them to release some of my other work.
Posted by a fan apart at 12:31 AM