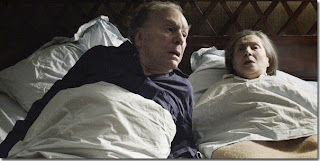 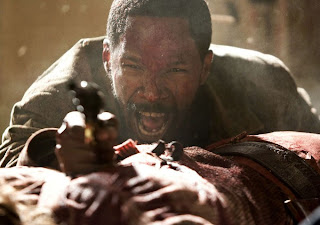 Django Unchained and Amour are strange bedfellows, but they are bedfellows nonetheless. For even though the former is about slavery in the American South and the other about an old woman dying before her husband’s eyes, they share one essential trait: cruelty towards the viewer. Quentin Tarantino and Michael Haneke both extend the same challenge – can you take what I’m throwing at you? (And if you can’t, maybe it’s because you aren’t tough enough to face up to the horrors of slavery/slow death.)


Neither film offers a reason why we should be seeing any of this. Amour serves creeping decay and death up as if its audience has never heard of it before, or needed reminding that it existed. Haneke is an artiste, an auteur, so his prolonged torture of the beautiful Emanuelle Riva is supposed to be art, life, or some admirable compromise between the two. The appalling violence in Tarantino’s film is an easier target, and many critics have (rightly) taken him to task for it. Me, I dislike slow, painful deaths as much as quick, bloody ones. And I find it as unappealing to watch one human body (even one belonging to a dirty rotten slave trader) being used as a shield as I do another wasting away before my eyes.

Both of these directors have had a long history of being cruel to their characters. The couple systematically tortured in Funny Games scarcely had it worse than The Bride in Kill Bill, who is beaten, raped and buried alive. Even as a fan, it’s pretty clear that since Jackie Brown, Tarantino has become a cartoon filmmaker, a homagemeister. But where Kill Bill had a visual flair that was often breathtaking and Inglourious Basterds’ had at least three superbly constructed set pieces, Django Unchained – the Klan scene and Christoph Waltz’s character notwithstanding – is an empty provocation, a chance to say ‘nigger’ a hundred odd times and show people’s heads being blown off while hiding behind the umbrella of ‘exploitation’.
At least Django Unchained – alternately lurid, poetic, brutal, fetid – feels rudely alive. Amour is death-affirming. I was shocked to read several critics say it was one of Haneke’s warmest films. Where was the warmth that I missed? In the cruel flashback/ forward structure? In the film judging Isabelle Huppert as she asks sensible questions? In the dream of an elderly man in which he’s being robbed? Amour is a film without subtext, without mercy, and without hope. If that’s what passes for great cinema nowadays, I’ll take Lincoln and its small manipulations. I’ll take Beasts of the Southern Wild and its wild risks. I’ll take No, Magic Mike, Moonrise Kingdom: films that give a damn.
Posted by a fan apart at 12:00 AM