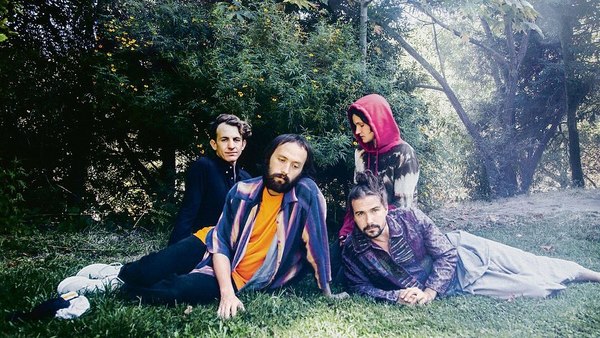 There has always been a place in pop music for a ghostly female vocalist. In the 1960s, it was the intimate yé-yé sound of Françoise Hardy; a decade later, Vashti Bunyan’s underappreciated Just Another Diamond Day. And in the 1990s, there was the stately hush of the Cowboy Junkies’ Margo Timmins and the aching haze of Mazzy Star frontwoman Hope Sandoval. To this august list we can now add Big Thief’s guitarist-vocalist Adrianne Lenker, whose delicately frayed singing shades in complex colours on the band’s third album, UFOF.

Right from the first track, there’s a tension built into this album that belies its gentle folkie surface. The first word sung in "Contact" is 'Jodi'—possibly a reference to Jodie Foster, who appeared in the 1997 film Contact as a scientist convinced of extraterrestrial life. The track gets eerier (“She gives me gills/ helps me forgive the pills") until it suddenly cracks, closing with agitated guitar and muted but hair-raising screams.

This title track also alludes to the otherworldly—“UFOF", it turns out, is “UFO friend". But the lyrics quickly turn from a literal reading (“She’s taking up root in the sky") to something more intimate. Hovering above dappled guitars and gentle drumming, Lenker whispers: “There will soon be proof/ That there is no alien/ Just a system of truth and lies/ The reason, the language/ And the law of attraction." It’s the closest a song has come to the feeling bottled in Terrence Malick’s film The Tree Of Life, at once mysterious, spiritual, sad and sensuous.

Buck Meek on guitar, Max Oleartchik on bass and James Krivchenia on drums provide tasteful support, but Lenker’s voice is the lead instrument, warbly and brittle on "Orange", country-twanged and steady on "Cattails". Most of the songs carry traces of her difficult childhood—her family was part of a religious cult for the first four years of her life—and none are entirely free of sadness. “No one can be my man, be my man, be my man," she repeats, as if trying to ward off a spirit, on From, which also appeared on her solo album, abysskiss. When she sings “Couldn’t tell for sure/Where the screaming sound/ Was coming from", her voice jerks up violently, then returns to a hush—but that split second contains a world of pain.

In an indie scene awash with male auteur voices, UFOF is a feminine outlier: Lenker sings all the songs, most of which are addressed to, or are about, female characters—Jodi, Caroline, Violet, Betsy. On Jenni, the titular character, she of the “vacant eye" and “skin so bare", might just be the UFO friend previously unnamed. As with the title track, the physical mixes with the otherworldly here, the nervous repetition of “Too hot to breathe" giving way to “The portal forms/ She calls me through", all of it carrying the delicate suggestion of burgeoning sexuality.

Big Thief’s sound, situated at the cross-section of country and confessional folk, hasn’t varied much over their three albums. Perhaps the only thing that separates UFOF from Masterpiece (2016) and Capacity (2017) is the wistfulness that marks even the sunniest songs on the album. Yet, even with its muted traumas, this is ultimately a hopeful record. The narrator in "Cattails" will be there on the double to help her struggling friend. The alien friend will spirit away for love. Even the death wish of "Terminal Paradise" has a silver lining: “I will blossom in your sail."

This piece appeared in Mint Lounge.
Posted by a fan apart at 3:00 AM